Supernatural Stakes and Romance Heat up in Knight of Flames 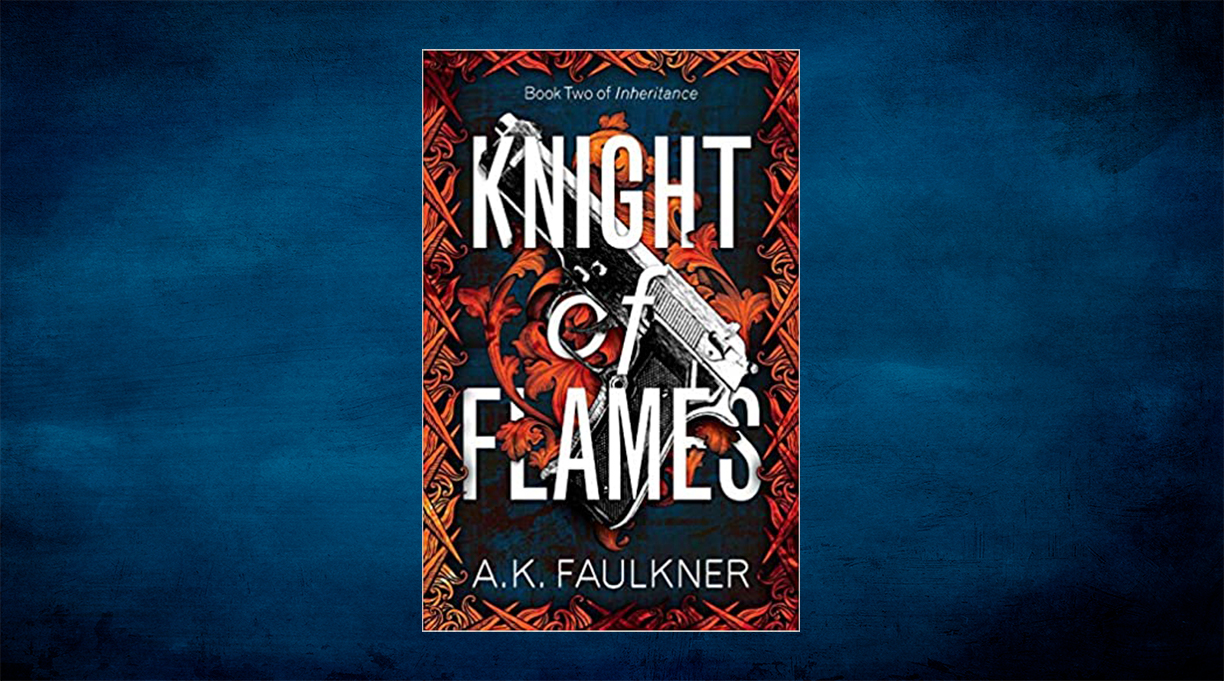 “What are you shouting at?” Reached by phone at her home outside of London, author A.K. Faulkner has been interrupted by Luna, her 9-year-old Welsh corgi, raising a ruckus at the door. “Are you coming in?” Luna apparently has other ideas. Faulkner turns back to the phone. “She refuses to grow up,” she says, laughing.

Hearing the fond note in Faulkner’s voice, it perhaps isn’t surprising that dogs play a small but key part in Knight of Flames, the second volume of her arresting new-adult fantasy Inheritance series about two young men with supernatural powers and damaged psyches who fall in love. The first book, Jack of Thorns, set in San Diego, California, introduced the attachment between rough-edged American florist Laurence, a pagan with precognition, a heroin problem, and a malicious god on his back, and Quentin, a kind and oddly clueless British earl haunted by a hidden past and in denial over his powers of telekinesis.

Following the worldly and otherworldly perils in Jack of Thorns that engulfed Laurence (and dramatically strengthened the young American’s gifts for precognition), Knight of Flames focuses on enigmatic Quentin. He and Laurence are now on a healthy (and increasingly passionate) path:

They fit together….For Quentin’s lack of knowledge and experience, there was Laurence. For all that Laurence was confident and sexually forward, he had a core of self-doubt, which Quentin’s own fortitude shored up. They were pieces of a puzzle which, individually, showed little, and yet when nestled together, revealed a complete picture.

Laurence has stopped using drugs. Quentin has stopped drinking and appears ready to give up his nomadic existence, despite his reasons—not yet fully revealed—for bouncing from one city to another. Laurence’s mother, Myriam, has become Quentin’s family; so have the two adoring rescue dogs he adopts, revealing an intriguing facet of his supernatural gifts.

Any happily-ever-after hopes are premature, however. (Knight of Flames, Faulkner jokingly says, “covers two of my favorite things: fire and explosions.”) Quentin becomes embroiled with a powerful psychic whose motive for collecting abandoned or mistreated children with special abilities may not be altogether altruistic. The violent crisis that ensues encompasses the arrival of Quentin’s twin, Freddy, who is determined to bring his brother home; the eruptions of Quentin’s incendiary new power and Laurence’s fiery vision bodes ill for the pair’s future.

Again, the relationship between the two men, developing around a foundation of compassion and mutual giving, essentially affects everything that happens. “That’s the advantage of intentionally setting out to write a long series,” Faulkner says. “How Laurence and Quentin grow and learn to deal with what has damaged them is fundamentally a lot of the story. I didn’t want to rush that, and I didn’t want to fall prey to any sort of funny ideas about masculinity, where you just suck it up and don’t deal with your problems.”

Indeed, Faulkner’s portrayal of the caring and loving support that Quentin and Laurence share, despite dark forces that threaten to engulf them, is striking. “I get quite frustrated when the problems in a fictional relationship are due to miscommunication,” Faulkner says firmly. Communication is “the absolute cornerstone” of a healthy relationship. “No one should put up with terrible people who treat you badly.”

The major hitch: Quentin’s inability to respond to Laurence’s yearning for physical as well as emotional intimacy, since any kind of physical intensity triggers Quentin’s potentially deadly, dissociative telekinetic response. Moving the couple beyond tentative kisses in Knight of Flames and answering the “will they or won’t they” question presented something of a challenge, Faulkner says. Not because of the sexual content (“I don’t really worry about that. People have sex, that’s life”) but due to her need to finesse the steamy sensuality of those moments with Quentin’s desperate struggle to protect Laurence when blind panic threatens to overwhelm him.

The exact cause of Quentin’s extreme psychological distress remains a mystery, but Faulkner tantalizes readers with more hints (including a shiver-inducing epilogue) about what has scarred Quentin’s body and given him such an “insidious and sickening” dread of his father that he essentially ran away from his ancestral home and the responsibilities of his title. Knight of Flames—described by Kirkus Reviews as “an energetic urban-fantasy sequel that skillfully expands the saga’s worldbuilding and cast”—keeps readers guessing about the cause. Is Quentin’s father really a monster, or is there something about Quentin that he is hiding from himself?

Uncovering the “heavy stuff” in Quentin’s past with authenticity, Faulkner says, means that readers must wait for answers. “There’s no way to rush it, as you find out later on. Basically,” she elaborates, “the first five books are a single story arc. I spent several years mapping out what happened in the past, what abilities people had, and how the world would work. I came up with Laurence and Quentin and went backward and forward, making sure they could bounce off each other. Then you have other things, for instance, Quentin’s need to protect children and Laurence’s heroin problem.” (Faulkner won’t give away what’s coming up, but if Jack of Thorns readers are wondering if any other pagan gods will manifest as the series progresses, her answer is, “Yes.”)

Penned under the name AK Faulkner, the Inheritance saga continues with Lord of Ravens, Reeve of Veils, Page of Tricks, Rites of Winter, Sigils of Spring, and an eighth book to be released later this year. Faulkner’s previous, five-volume Tooth and Claw series, about the relationship between a male werewolf and vampire, published under Amelia Faulkner, falls in the adult paranormal category. Both series have received Rainbow Awards and honors for outstanding LGBT fiction.

Next up for Faulkner, a frequent traveler, is a trip to Japan with a friend (“We’re just going to be touring around and trying to get some sunshine because we both have seasonal affect disorder”) and Outlantacon, the four-day LGBTQ SF, fantasy, comics, and gaming convention in Atlanta, Georgia, “where I’ll be manning a table and pitching my wares.”