A Self-Portrait of the Late Artist as a Child 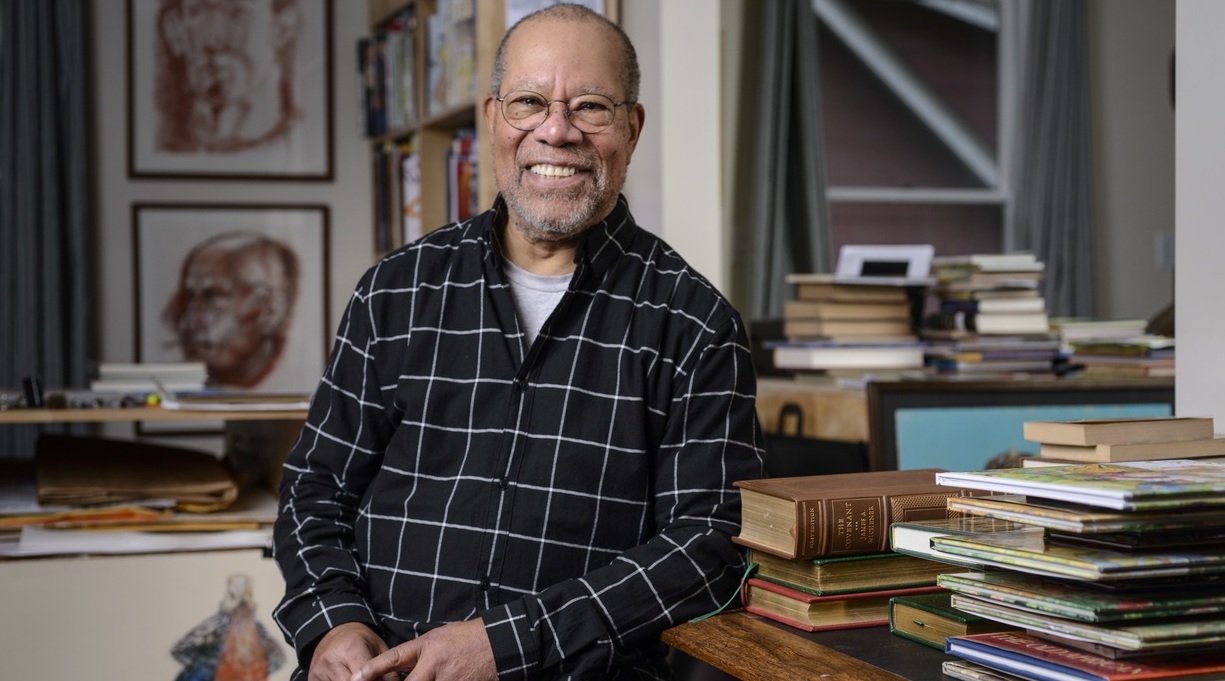 Jerry Pinkney, winner of numerous Coretta Scott King Medals and Honors, winner of the Children’s Literature Legacy Award, and the first African American winner of the Caldecott Medal, passed away in October 2021. He left behind a lustrous body of work, an industry he helped change for the better, an artistic dynasty—and the nearly finished manuscript of his memoir. Just Jerry (Little, Brown, Jan. 17) describes growing up in a close-knit Black neighborhood in Philadelphia, his struggles with dyslexia, and his beginnings as an artist. Editor Andrea Spooner worked with Pinkney for some 10 years on the book, and she met with Kirkus via Zoom from her New York office to discuss its evolution. (As we spoke, she sipped tea from her work mug, which commemorates Pinkney’s Caldecott-winning gem, The Lion & the Mouse.) The conversation has been edited for length and clarity.

What was the first book you and Jerry worked on?

The first book that we started together from scratch was The Ugly Duckling (Morrow/HarperCollins, 1999), which was a Caldecott Honor. I like to think that set the tone for a very strong, successful relationship. Jerry pretty much watched me grow up; I was in my 20s when I started working with him. I was still very young and naïve in the business. He was such a mentor to anyone that he came in contact with, and yet he was still willing to listen to and respect a kid in their 20s trying to tell a master what might work better. That’s so much a part of who Jerry was.

Could you talk a little bit about the development of Just Jerry?

He’d had a contract for an autobiographical picture book at another publisher, but the draft had been sitting there for years. When I read it, I completely understood why the publisher didn’t know what to do with it. There wasn’t a simple singular story arc there that could deliver much of substance in a picture-book format. And the style of writing was somehow distant from a child’s voice. He was in his 70s at that point, and it was utterly different than anything else he’d ever attempted to write. But what I saw in this original text were these discrete images of places, objects, and people that seemed fundamental to how a young, brilliant artist was able to discover and pursue his talent.

I immediately started to envision a chapter book—even though I knew that would be a real stretch for Jerry from a writing standpoint—but I couldn’t let go of the idea that each chapter could show different key moments of his young life that allowed him to develop this awareness of his skill and to find a space to develop it. I talked to Jerry about the heavy lifting that would be involved in the writing, especially to try to develop a kid-friendly voice. And he was always game for a challenge. That was one of the great things about working with Jerry: He never sat back and [said,] “I know how to do this. Don’t tell me what I’m doing.” He just always wanted to be learning more and pushing himself to do more. And of course, writing was something that he always struggled the most with. I think he felt that it was his life’s crowning achievement to try to grapple with that struggle.

The initial vision was for the book to be highly illustrated, but Jerry died before most of that work was done.

I was very sad that Jerry was not going to be able to fulfill [the original] vision. But once we started laying it out with sketches, it felt very natural and alive. In the book, Jerry is always scribbling and sketching. A lot of people think of Jerry as a painter, right? That’s what he made his name on, his watercolor paintings. But he said to me, “I always think of myself as a draftsman first. I don’t think of myself as a painter, I think of myself as a draftsman.” And when you read the book, you totally understand it. So there was something that felt right about honoring the origins of his skill with these scribbly, sketchy drawings.

Did you have time to talk about any of these decisions with him?

He had tossed some ideas [about the title] my way, and I had taken those and created my own brainstorming list. And then he sent me a long list back. I pulled out “Just Jerry” because that was a quote from his mother that was one of his very favorites. I noticed that when he sent back his ideas, a lot of them started with “Just Jerry.” He had talked to his wife, Gloria, about it, too. And she had said that was one that he was very fond of. He had his sketchbook, as always, with him in the hospital, with notes in it. And Gloria said he had put a star or two by “Just Jerry.”

What are you hoping kids will take from the book?

Jerry and I weren’t necessarily going into it with the goal that the book was going to get all kinds of awards or anything—it was a story that needed to be told. And it was a challenge he needed to accomplish in his life. Jerry wanted children to see how important it was to pursue your interests and your passions in the face of whatever challenges you may encounter. He felt that if he could do it, you could do it, too, and that’s what I want kids to get out of the book really: to feel inspired. Jerry felt that his dyslexia shaped who he was, and not necessarily in a bad way. He wouldn’t have asked to grow up with dyslexia if he had a choice, but he did feel ultimately that the struggles drove him into his art in a way that really empowered him.

What do you miss most about working with Jerry?

There is something about the way that he connected with people, with everyone that he spoke to. Even if it was just a five-minute phone call about some logistical thing regarding work. When he said, “How are you,” he said it in a way that you knew he really wanted to hear about what was going on—it wasn’t just niceties. There was a genuine sort of authentic care that Jerry had for every person he was interacting with as well as the project you were working on. It was never just a job, which is why he was always willing to go back and do a revision if you asked for it; he always felt he had room to grow. I said to Gloria, “You know what? Jerry would be really proud of [this].” And she told me, “No, no, he wouldn’t be proud.” And I was like, “Oh, you’re so right. You’re right, but he would always say, ‘I’m very pleased.’ ”