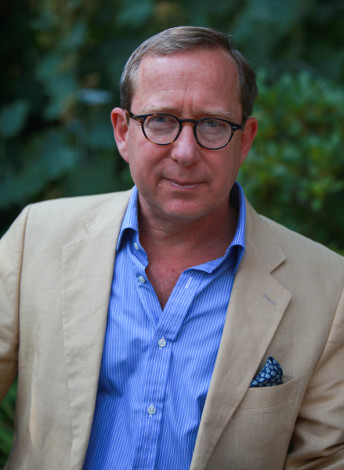 John Updike’s 1968 novel Couples was a sign of the times, and the times were swinging. The sex-fueled, bed-hopping romp — Updike’s own wife said reading it was like “being smothered in pubic hair”—was a huge commercial success, spending 36 weeks on the New York Times best-seller list.

Updike, who beamed from the cover of Time the week Couples was published, said in the interview: “My marriage, like many others, has had its intervals of death and renewals.” He wasn’t kidding. As Adam Begley reveals in Updike, his absorbing new biography of the author, Updike wrote extensively from his own sex-fueled, bed-hopping experiences.

“I spoke to people he’d had affairs with. He had a lot of friends, and there was a great deal of interconnecting there. If you’ve read Couples, you know exactly what I mean,” Begley says. “He used his nearest and dearest ruthlessly in his writing—family members and lovers. He would change details to disguise, but anybody who starts digging in his biography will recognize people fairly quickly.”

In 1974, after nearly 20 years of marriage and six years after the publication of Couples, John and Mary Updike divorced. Begley interviewed the former Mrs. Updike extensively and reveals in the biography that one of Updike’s later books was about another affair and that he had actually written it before Couples.

“The first time he wrote about adultery was a book called Marry Me that was published 10 years after he wrote it, and it’s the only book in his cannon that was published out of sequence,” Begley says. “That was a book about an affair that he had in the mid-’60s and it wasn’t published until the ‘70s. It’s a novel, but it’s very closely based on the facts of an affair.”

Begley was the books editor at the New York Observer for a decade. Now based in England, he has written for New York Times Magazine, The Guardian and London Review of Books. Though Begley met Updike only a few times, his father, novelist Louis Begley, and Updike were classmates—English majors, naturally—at Harvard in the ‘50s.

Updike, who died in 2009, was one of the most lauded and prolific of 20th century American writers, and he had critical success early in his career. He won a Guggenheim fellowship when he was 28 and a National Book Award for The Centaur (1962) when he was 32.

Updike was also one of the best-known short story writers and critics of his generation, writing nearly 200 short stories and countless book reviews for The New Yorker where his byline was a mainstay throughout his career and art criticism for the New York Review of Books dating back to its founding in 1963.

As part of his research, Begley took on the task of reading the entire Updike cannon—a bulging bookcase of novels, short story collections, criticism collections, children’s books, and a memoir.

“I did a calculation when I started out that if I wanted to reread all the books and it took me a week to read each one, that would be more than a year’s worth of reading,” Begley says. “I got through pretty much everything. There may be an essay or two I missed, but I certainly read all the fiction and all the poetry.”

By the time he finished, Begley had spent five years reading and rereading Updike. He read every book and an enormous trove of correspondence at the Houghton Library at Harvard University, where he did much of his research.

“In addition to writing all this fiction and nonfiction, he wrote letters almost endlessly,” Begley says. “And they’re actually brilliant letters, especially letters to his editors and the New Yorker, and his letters to Knopf [his publisher], and to his mother, with whom he corresponded for something like 40 years.”

“For me, the revelation among his novels—one I had read before but when I read again took on greater force—was the second Rabbit book, Rabbit Redux,” Begley says. “It’s a very powerful, strong, turbulent book about a very turbulent time in American history—the ‘60s. The Rabbit books are just going to get more important in the canon of American literature.”

Scott Porch is an attorney and writer in Savannah, Georgia. He writes frequently about books for Kirkus Reviews, Salon.com, and Huffington Post, and he is writing a book about social upheaval in the 1960s and '70s.