The latest in our series of articles remembering classic books. 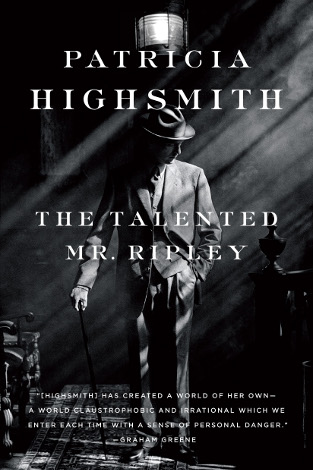 Two strangers meet on a train. They fall to talking. In no time at all, they have planned the perfect murder. Two murders, in fact.

Two strangers meet in a bar. One wants help. The other wants—well, as it turns out, the world. In no time at all, bodies pile up.

Patricia Highsmith had a famously low opinion of people, seeing in our kind mostly an endless capacity for venality and mayhem. The survivor of a childhood harsh enough to make Charles Dickens weep, she had been subsisting on income from writing comic books for the suspect masses when, thanks to a happy accident, she met Truman Capote. Young and barely known himself, Capote encouraged her to redraft the on-again, off-again manuscript that became Strangers on a Train, a book that bowed in in 1950 and soon became a hit Alfred Hitchcock film.

Flush with movie money, Highsmith spent the next few years on two books, the first a lesbian novel that she published under a pseudonym, the other a darkly pessimistic book called The Talented Mr. Ripley, published in 1955. Young Tom Ripley is talented indeed: he can throw a voice, forge a signature, charm a snake, sell ice at the North Pole. He can sing and do stand-up comedy. But he is damaged, and we’re never quite sure why, and he is lethally envious of anyone born with more privilege than he, which makes for a large pool of candidates. He can even fly a helicopter, he tells a future victim. What’s more, he boasts, “No matter how drunk I get, I can always tell when a waiter’s cheating me on a bill.”

As The Talented Mr. Ripley opens, our eponymous antihero, who hints that he’s been working for the IRS, is recruited to rein in the wayward son of a wealthy boat builder. Dickie Greenleaf has been dividing his time among sailing, painting, and squiring beautiful young women on the coast of Campania. Spoiled beyond belief, he’s the hippest of the proto-hipster set, and he lives the life that Tom wants. Highsmith does more than hint that Tom wants Dickie as well, and at the end of a book marked with one killing after another, Tom is regretful about a love gone unfulfilled: “If only he hadn’t been in such a hurry and so greedy…then none of this would have happened, and he could have lived with Dickie for the rest of his life, traveled and lived and enjoyed living for the rest of his life.”

Ripley has been filmed twice, most recently in 1999 with a disarmingly but appropriately boyish Matt Damon as the globe-hopping psychopath. Damon does a fine job of showing just how ordinary and at once extraordinary Ripley is, a born weeder of the 1 percent class who walks among us unnoticed and with definite malice aforethought. He is now 60 years old, but his moves haven’t suffered for age, and he hasn’t lost the power to break a heart and snap a neck. It’s a cheerless book for a cheerless world, and The Talented Mr. Ripley rightly stands as a classic of literary crime.