April Is the Cruellest Month? No, It’s Wimpy Kid Month:

What makes a phenomenon? 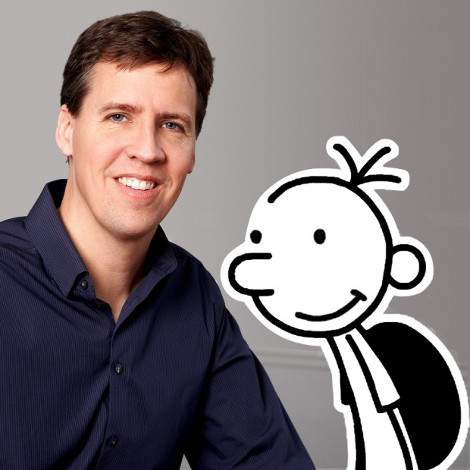 As the first-ever Wimpy Kid Month slogs its way to its epic climax on April 28 with the reveal of the title and color of the next volume in Jeff Kinney’s wildly popular Diary of a Wimpy Kid series, it is probably worth spending some time to reflect on what can legitimately be called a phenomenon.

Launched in 2007 with the original Diary of a Wimpy Kid, the series was initially planned to comprise three volumes. An adaptation of Kinney’s online serial of the same name on the kid-oriented website funbrain.com, this novel combining large-print narrative prose with cartoons was an instant success. I remember heated discussions of the advance copy in my library’s teen book club. The older kids tended to see it as just plain “stupid,” but middle schoolers loved it. The legendary “cheese touch” seemed to mark a developmental steppingstone, as it was this detail that divided the two camps. Though he didn’t love the cheese touch, one older boy known for his almost preternatural fair-mindedness argued eloquently for its worth, reading aloud from Greg’s form-letter thank-you notes. (“Dear [Aunt Loretta,] Thank you so much for the awesome [pants]! How did you know I wanted that for Christmas? I love the way the [pants] looks on my [legs]! All my friends will be so jealous that I have my very own [pants].”) The entire room was in hysterics by the time he finished.

Before the third book in the series came out, Kinney’s contract had been extended to five books, then more. There were tours, stunts, movie deals and spinoffs both authorized (The Wimpy Kid Do-It-Yourself Book) and un- (Diary of a Zombie Kid, which spawned a lawsuit. Kinney’s publisher, Abrams, proved itself without peer in its ability to find marketing angles, making major press events of the mere revelation of the next book’s color. (This last begs the question: How many more colors can they find before running out of gas? The light-blue Cabin Fever had to have been an anticlimax after the blue-blue Rodrick Rules, and the last two colors—brown for The Third Wheel and swamp green for Hard Luck—are underwhelming at best.)

As phenomena do, Diary of a Wimpy Kid spawned endless knockoffs and the coining of a reviewers’ shorthand—“Wimpy Kid–esque”—that proves its influence. Fellow cartoonists Lincoln Peirce (Big Nate), Stephan Pastis (Timmy Failure) and Michael Fry (Odd Squad) have launched their own series, the first two joining Kinney on the best-seller lists, but they are just a few in a seemingly ever-widening pool of similar prose-cartoon hybrids.

That Greg Heffley, the original Wimpy Kid, bestrides this particular world like a colossus is in no doubt. Though he fairly cheerfully shares the market with his counterparts (Kinney provided the cover blurb for Big Nate, for instance) he also dominates it. This has me wondering what it is about Greg that appeals so to his audience. From the first book, Greg never struck me as particularly wimpy. Though he’s hardly at the top of the middle school food chain, his constant scheming is not the hallmark of a pushover. In his relationship with best friend Rowley, he’s a positive bully. Is this what strikes such a chord with readers? That he enacts what they would like to but don’t dare? Or is it simply that middle graders get a sort of Three Stooges kick out of seeing Greg’s plans go awry time after time? There’s a sort of “there but for God go I” feeling that goes along with seeing Greg brought low by his machinations.

Kirkus has complained in its reviews of recent volumes that Greg never learns or grows, despite ample opportunity. Of course, while character arc is a virtue in a novel, it is not necessarily conducive to a series. In order to continue what is clearly a successful formula—millions of volumes sold don’t lie—Kinney cannot allow Greg to learn or grow. This depresses the heck out of me, but of course I am not Greg’s target audience.

In fact, as the divide in my teen book group showed, Greg’s target audience is a very specific one, and they age out as quickly as they age into it. The kids who launched Wimpy Kid into the stratosphere in 2007 and 2008 have long since moved beyond, but they’ve been replaced by their little brothers and sisters—who, Abrams doubtless hopes, will be replaced by their younger siblings in turn. While I may wish that Greg experienced even some small epiphany in each volume, his growth might well undercut his appeal. Assuming that the kids who are in the Wimpy Kid sweet spot derive actual pleasure from Greg’s stasis—and one can only assume that they do, or they’d stop demanding the books—allowing Greg to learn could prove disastrous.

The (downloadable, printable) poster Abrams has made available on its website in celebration of Wimpy Kid Month trumpets, “MILLIONS OF KIDS ARE READERS BECAUSE OF THIS BOOK.” Unprovable though this claim might be, it’s hard not to acknowledge a kernel of truth in it. And in this light, perhaps we should be celebrating Greg’s dogged refusal to discover his better self. There’s a part of me that looks forward to the seemingly indefatigable Kinney’s future decision to say goodbye to Greg, and that part hopes that Greg will see a quantum shift in attitude in the final (fuchsia? teal? persimmon?) book.

Till then, though, Happy Wimpy Kid Month.

Vicky Smith is the children’s and teen editor at Kirkus Reviews.