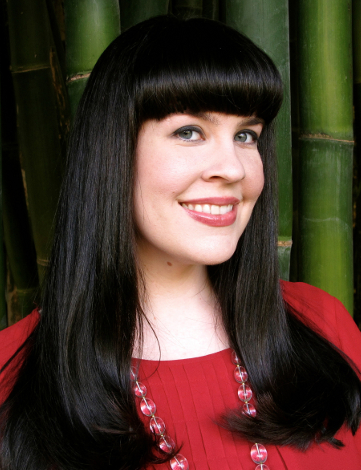 Caitlin Doughty and I sit on a café patio in ever-sunny Los Angeles, laughing at the erratic soundtrack, which swings from classical to Italian opera to Phil Collins—but we’re here to talk about death. After college, Doughty worked as a crematory operator in Oakland, then attended mortuary school in Orange County. For the past few years she’s kept a popular blog about death, and now she’s starting her own alternative funeral service in Los Angeles, Undertaking LA. Her new memoir, Smoke Gets in Your Eyes, is the story of a young woman’s experience in the death industry. In her late twenties, Doughty seems young to be so fascinated by mortality—her open honesty and passion for the subject is disarming.

“Any normal person in any functioning society throughout history has never been able to keep death as far at bay as we have,” she says. “Not only are people living so much radically longer, the fact is that when they die—because they will die—you could conceivably not see their bodies. It’s completely unprecedented.”

She’s right. I’m 26 years old and have not had any intimate friends or family members die since I’ve been old enough to remember. I’ve been to my best friend’s grandmother’s funeral service. Once I saw the body of man killed in a car accident on the side of the road. But that’s it. These are my only close personal experiences with death. While I realize that I’ve been especially fortunate—that for some, death is all too commonplace—Doughty argues that for most Americans, death has become an increasingly distant abstraction.

Doughty is a welcoming guide into a dark world. We follow along as she shaves her first corpse, learns the process of embalming, and frantically cleans up after the molten fat of an overweight woman’s body overflows out of a cremation machine. “The point is not just to share my story. The point is to get these ideas about how we approach death across through my story,” Doughty says. “What I’ve found again and again is that it’s a lot easier for people to take these really gritty, difficult, sometimes gruesome stories or facts or ideas when they come in the package of somebody friendly and honest.”

Doughty and I discuss the Cremulator. “In California, the cremation permit and authorization that you sign is very specific that what you’re going to get back is undistinguishable, unidentifiable, ground-up remains,” she says. This means that fragments of bone not turned to ash by the cremation machine—along with the rest of the inorganic remains—are put into an industrial-grade blender, called a Cremulator, to blend everything into a uniform fluffy white powder.

“California is a very big scattering state, and if you’re going to scatter ashes, you don’t want to be casting bones around a park or into the water,” Doughty says. “But I also think it has to do with increasing acceptableness and plausible deniability of what the ashes actually are. It’s completely abstracted—these are completely hypothetical remains. It just adds to the culture of deniability.”

Doughty takes aim at this culture of death denial throughout Smoke Gets in Your Eyes. “There’s a systemic aversion to death. Hospice workers, nursing home workers—misinformation is building on misinformation,” she says. When her grandmother Tutu dies, a funeral director tells Doughty’s mother that keeping the body longer than two hours at home is against state law, which is untrue. At a family viewing, “her mouth had been pulled into a grimace with wires and superglue.…She wore bright-red lipstick in a color she never wore when she was alive. I couldn’t believe I had let my own grandmother’s body fall victim to the postmortem tortures I was fighting against.”

Back at the coffee shop, we sit outside, sipping oversized caffeinated beverages, enjoying another beautiful late-summer day in Los Angeles. “LA’s perfect for this, weirdly,” Doughty says. “It’s the belly of the beast. But when you work on death every day, and you’re taking on people’s sadness and their stories, when it’s absolutely beautiful outside and the streets are lined with palm trees, it’s hard to fall into bad patterns of thinking.”

Walter Heymann is a freelance writer and screenwriter who lives in Los Angeles.