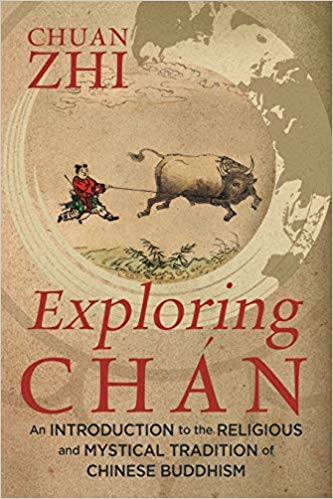 “Studying Chán is like studying Mars with binoculars,” writes Chuan Zhi in Exploring Chán: An Introduction to the Religious and Mystical Tradition of Chinese Buddhism. “We can know there’s something there, but we can’t know much about it in any detail.” And yet this is exactly what the ordained Buddhist monk and author accomplishes in his debut book—a thorough, incisive reflection on not only the practice of Chán Buddhism and meditation, but also its evolution from its origin in ancient India. It was, Zhi admits, definitely a case of “write the book you want to read.”

Zhi says, “At one point I asked myself, ‘Why are you writing this book?’ This was about three years into it. And I said, ‘I am writing this book for me because I wish [I’d] had a book like this when I was just starting out….I had so many questions and nobody could answer them, and I wanted to understand things more than I was able to from the resources I had.”

The author set out on his path to explore Zen and Chán decades ago, during his college years. In his 20s, he tried repeatedly to meditate. When he was older, he tried meditation again only to discover he still couldn’t master the practice. But he didn’t give up. In his book, Zhi writes:

My first encounter with meditation was startling. I had heard a lot about meditation, and in fact thought I had already mastered it. But the first time I slipped into meditation I knew my thoughts about it had been wrong. There had previously been no change to the quality of consciousness which this new experience provoked. The first thing I noticed was that my breath had become threadlike, slow, rhythmical, and relaxed. As I watched it, it seemed as if I had stopped breathing altogether. My mind became exceptionally clear and focused. As I watched myself watch my mind move, the “I” that was watching vanished, leaving the mind to itself.

But while initially Zhi’s interest in Chán began with meditation as a young man, as he grew older, he became more curious about the principles and history of the religion itself. So he began asking questions. Those led to more questions and, ultimately, to a journey to mainland China in 1998, where the American-born Zhi became a monk at China’s Hong Fa Temple in Shenzhen, southern Guangdong province.

And even then, the questions kept coming. Zhi was writing essays and articles and even interacting with online groups; yet still, there always seemed to be more to learn, uncover, and explore. No matter how much he read or whom he talked to, there always seemed to be what he calls “a lack of cohesive information.” Where was the book that would tie it all together, especially for people like Zhi, who was still struggling?

According to Zhi, many people don’t know the full history of Buddhism or its origins. Even if it meant countless footnotes and citations, he was determined to delve deeper into the religion’s roots in India “because it was such a complex, convoluted story, and you can’t just tell it in one smooth narrative.”

“It takes all these little subnarratives to kind of get a picture of the whole thing,” Zhi says before pausing. “And even then, it’s my picture…that I’ve created from what I’ve read and the experiences I’ve had. I’m sure other people would put things together differently. But that’s part of the fun of writing.” He laughs. “It’s part of the creative license.”

The book was no small feat. Exploring Chán took six years to write. And rewrite, then rewrite yet again. Because the more Zhi dug into Buddhism’s history, its texts, and the work of other scholars, the more he uncovered.

And yet, he says, the entire process was “engaging and fun” even when the book started taking on a life of its own. But thanks to a background in math and science, Zhi had both the discipline and methodology to tackle the subject matter, carefully citing sources, referring to previous works and texts, and—as readers will see—providing mountains of fascinating footnotes (such as the sacredness of the number “108” and its value in both religion and mathematics) that not only clarify the book’s occasionally dense content, but also add an extra layer of storytelling.

While Kirkus Reviews calls Exploring Chán “a remarkable study that’s intellectually stimulating, historically edifying, and spiritually instructive,” Zhi knew that for his book, there was no easy, linear narrative available. “I definitely came at it from my own point of view that’s evolved over my lifetime,” Zhi says. “I wanted to make sure that that came across in the book. That this is my personal perspective of things, because I think that’s important. Other people will have different ways of interpreting Buddhism and Zen, which is fine. And I make that point, that we all have our different things to stay about it based on our experience—and this is my experience and what I have to say.”

Based in Toronto, Hannah Guy is a professional writer and copywriter who specializes in books, books, and more books.