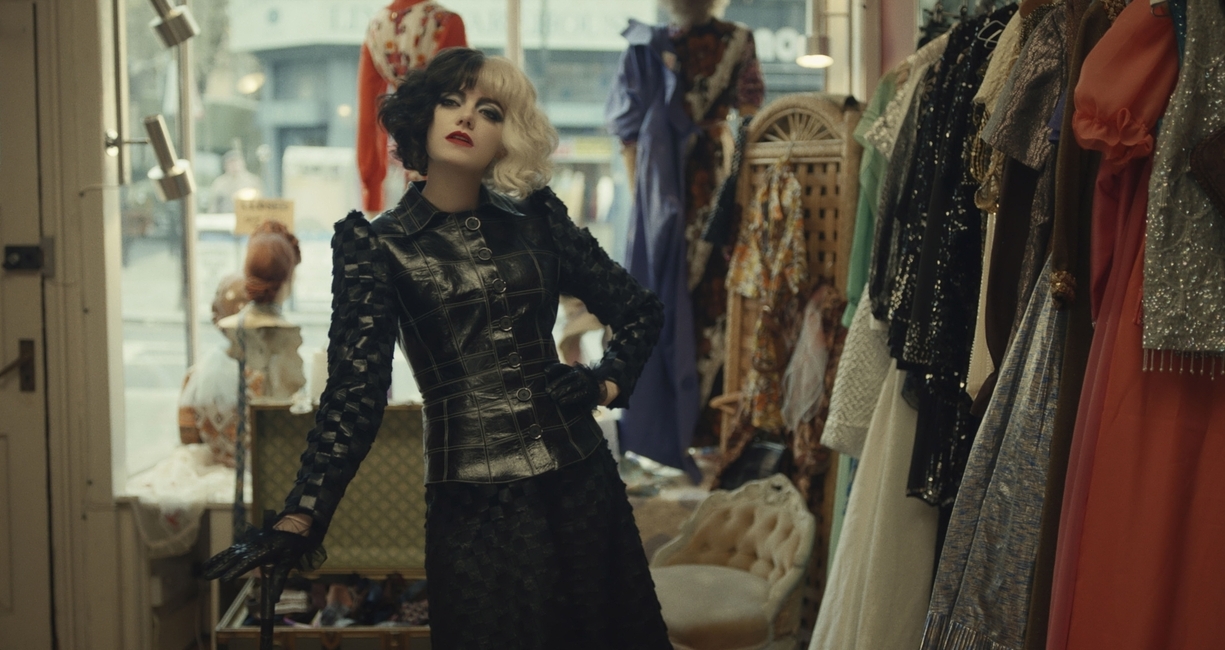 In 1971, John Gardner published Grendel, which portrayed legendary warrior Beowulf’s monstrous opponent as a thoughtful, lonely creature. Gregory Maguire’s 1995 novel, Wicked, humanized the villain of The Wizard of Oz, depicting her as “conscientious and honest, hardly a witch and certainly not evil,” according to Kirkus’ review. Three Star Wars films detail how the idealistic Anakin Skywalker became the tyrannical Darth Vader. Now, the movie Cruella, premiering in theaters and on Disney+ on May 28, embraces this tradition. It offers a loose prequel to Dodie Smith’s 1956 children’s novel, The Hundred and One Dalmatians, that focuses on its villain’s start of darkness. Although it’s a creative, visually stunning, and fashion-forward affair, it still takes a few missteps on the runway.

In Smith’s Kirkus-starred book, Cruella de Vil is a debt-ridden heiress with distinctive black-and-white hair who lives with her husband, a professional furrier, in an English estate known as Hell Hall. She decides to steal dozens of Dalmatian puppies in a scheme to create a fur coat and accessories out of their hides. “Listen,” she tells her henchmen, “I don’t care how you kill the little beasts. Hang them, suffocate them, drop them off the roof—good gracious, there are dozens of lovely ways.” However, Pongo and Missis, the parents of 15 of those pups, manage to rescue the kidnappees before Cruella can carry out her nefarious plan. (It’s worth mentioning that although Cruella doesn’t kill the dogs, she’s said to have drowned no less than 44 cats in the past.)

The novel provided the basis for the 1961 animated Disney film One Hundred and One Dalmatians, which tweaked the source material a bit. Cruella, voiced by Betty Lou Gerson, is the unmarried head of a fashion house, and her thieving henchmen, now called Jasper and Horace, have more prominent roles. She also has a more flamboyant personality and fashion sense than the book’s relatively low-key character; the animated version would also inspire Glenn Close’s portrayal in Disney’s 1996 live-action 101 Dalmatians film and its 2000 sequel; incidentally, Close is one of the producers of the new film.

Cruella, which features Emma Stone in the title role, leans into the Disney adaptations’ fashion-industry elements and pays little attention to the original source material. (No dogs—or cats—come to harm in this film, fortunately.) Its story opens in 1960s England, where a young girl named Estella often gets into fights with bullies who mock her two-toned hair. Her loving single mother, Catherine (Little Joe’s Emily Beecham), mildly admonishes her and jokingly calls Estella’s angry side “Cruella.” After Estella gets expelled from school, Catherine takes them both to see a mysterious “friend” at a mansion, where a series of mishaps leads to Estella’s mother falling off a cliff to her death—and although it’s not the first time this has happened to a parent in a Disney movie, it’s still shocking. The orphaned, grief-stricken Estella flees to the streets of London, where she meets young thieves Jasper and Horace; they live together as a charming found family, often relying on con artistry to survive.

A Cruella tie-in YA novel, Hello, Cruel Heart by Maureen Johnson, tells a whole separate story about these characters as teens. The movie, however, skips right to their 1970s adulthood, as Estella gets a job at a high-end London clothing store to pursue her dream of being a fashion designer—a calling for which she shows amazing aptitude. Before long, she’s working for the brilliant, feared designer known as the Baroness (Emma Thompson), who treats her employees like trash but still recognizes, and exploits, Estella’s obvious talent. But when Estella finds out something disturbing about the Baroness’s past, she decides to use all her skills to sabotage her employer—and make a name for herself in the fashion world.

Academy Award winner Jenny Beavan’s brilliant, daring costumes are reason enough to see this film; throughout, they improbably but breathtakingly combine Disney-style grandness with a ’70s punk aesthetic. But although the movie, directed by I, Tonya’s Craig Gillespie, has plenty of other things to recommend it, it often seems to give with one hand while taking with the other. For example, there are some inspired music choices; the Baroness enters the film to the strains of the Doors’ “Five to One,” which features the highly appropriate lyric “No one here gets out alive,” and a heist scene is heightened by Ike and Tina Turner’s serpentine cover of Led Zeppelin’s “Whole Lotta Love.” Another key scene wittily makes use of the Stooges’ classic stomper “I Wanna Be Your Dog.” Unfortunately, there are several other bland soundtrack choices, such as the Zombies’ “Time of the Season,” that add nothing at all; they just seem to be there to fill space—and with a too-long two-hour-plus runtime, there’s a lot of space to fill.

Stone and Thompson, both Oscar winners, are riveting as gifted, sometimes-brutal fashionistas. Sadly, the film’s troubling portrayal of mental illness hems in their characters. When Estella has an emotional breakdown and embraces her Cruella identity, she undergoes a personality change that deeply concerns Jasper and Horace (Game of Thrones’ Joel Fry and Richard Jewell’s Paul Walter Hauser, both great). For a moment, it looks like the film is going to explore how trauma and mental illness affect entire families—but the filmmakers quickly abandon any such nuance. Instead, characters throw around the word “psycho” with disturbing frequency. Indeed, one can too easily make the case that the film equates mental illness with villainy; it also troublingly seems to take the position that if your relatives have done bad things, you’re doomed to do bad things, too. Sure, this movie is a prequel, and, as such, the characters’ fates are set in stone. Still, one wishes that the filmmakers had made a few different choices.