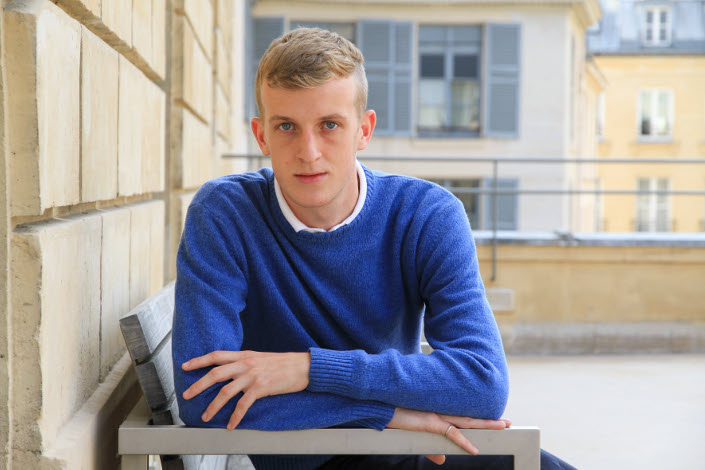 In 2014 at the age of 22, Édouard Louis published his first novel, The End of Eddy, in France and caused a sensation in the French press. Like another recently celebrated European author, Karl Ove Knausgaard, Louis takes directly from his own life to craft bleak images. Also like Knausgaard, he came under intense media scrutiny as investigative journalists sought to separate fact from fiction, digging into his shocking stories to determine what he fabricated and what really happened. But Louis maintains that he fictionalized nothing.

Just like the Eddy in his book, Louis was born into a family of seven that subsisted on 700 euros a month, often going hungry and living in a cramped, moldy house in Picardy, France’s equivalent of the Rust Belt. His given name was Eddy Bellegueule (which roughly translates to Eddy Smug-mug but with connotations to several less-than-polite expressions). His entire village tormented him for his effeminate nature and budding homosexuality, both physically and through constant verbal attacks. And by the time he finally escaped to attend high school at a boarding school in a nearby city, he had never even read a book in its entirety.

“It was very important that every single line of this book related to something that I saw, that I felt, that I experienced in my flesh, because for me, truth was an emergency,” says Louis. “I live with this terrible impression that the world we are living in is a world of lies.” Louis felt that the title of ‘novel’ was important for what he wanted to create, equating it not to fiction but to the way in which it would allow him to construct his story: “If you want to tell the truth, you have to build it....I was afraid that if I wrote only a memoiror autobiography, it would have minimized the role of literary construction. For me, it was very important to insist on that construction.”

Construction, or rather reconstruction, certainly plays an enormous role in the book. Each chapter starts with a recollection of life in his village; memories start springing from each other, creating an intricate and often grotesque web of moments from his life. The narration constantly builds and blurs the distinction between Édouard, the educated writer telling the story, and Eddy, the unfortunate young boy who lacks the language to describe the nightmare he is living.

But the real innovation at the heart of The End of Eddy is its ability to defy our narrative expectations about social class and social mobility. “The bourgeoisie always have a fantasy about how culture or literature opens our minds and how literature saves us. But it’s true only for a certain kind of class,” Louis asserts. “For us, a book was an insult and an assault. It didn’t save us from anything. It wasn’t that we didn't have [books], it was that we hated them. When we would see a book, it was the symbol of the life we would never have.”

When Louis finally did engage with literature, he found that people like him and his parents were either completely absent or, as in Genet and Pasolini, glorified as inherently good for their suffering. “I hated this mythology, this ideology, because I felt that it was not true,” says Louis. “Nowhere in literature were there people like my parents or like me….I wanted to take revenge against literature by including these people.” In his book he describes them exactly as he sees them: economic victims of larger social structures who also perpetuate misogyny, racism, and homophobia.

The depiction of these issues in rural France raised eyebrows three years ago. Critics and acquaintances accused Louis of exaggerating the truly horrifying moment when his mother confirms his homosexuality, the xenophobia in his family, and the level of poverty they endured. At the time, they were unwilling to believe that people were really “like that” in France, but now, three years later, his story has taken on prescient and powerful dimensions in light of social issues boiling over in the country’s tense presidential elections. “Suddenly everyone wanted to ask me about the extreme right, and I said, ‘Oh, really? I thought that I was exaggerating?’ ”

In the world of Louis’ childhood, effeminate boys deserved to be spit on, North African immigrants were not to be trusted, and women were not supposed to work. All normal elements of daily life he wanted to call out as violence. “If you ask my mother why she stopped school at 16, she would say, ‘It was not my thing, I was not interested in school.’ She won’t call that violence. She won’t tell you ‘it was impossible for me to go to school because my husband didn’t want me to work.’ My role as a writer is to show violence where people don’t see it, where they don’t feel it.”

When asked if he has any regrets or apprehensions about revealing so many intimate, brutal details from his family, Louis responds with a definite “no.” His primary concern in writing is to advance protections for queer people and people of color while also being critical and honest about why the people of his village attack them. In The End of Eddy, the village is so much more violent than the streets of Paris or Manhattan because of the way that people are worn down by poverty and backbreaking work. “When people endure violence all the time, like the working class do, they end up reproducing this violence on other people,” Louis explains. “They would continue this violence like an electric current. If you say that, you’re criticizing the violence twice. You’re criticizing the violence that people suffer from and you're criticizing the violence that they create.”

But while the narrator Louis is ready to confront these ideas, the protagonist Eddy remains a kid simply wanting to fit in. As his mother cackles crassly about her previous miscarriage and his father gets into drunken bar fights, the naturally soft and effeminate young boy longs to be like them. He wants to be fat, to play soccer, and to shamelessly seduce girls, but his attempts are all in vain. The novel doesn’t concern itself with Eddy’s transformation into Édouard but focuses on Eddy’s inability to join such a terrible world and transforms that failure into a fascinating tragedy. “My dream was not to read Simone de Beauvoir or James Baldwin,” says Louis. “My dream was that my parents would be proud of me….At some point I escaped, and when I did, it was a terrible failure for me. I didn’t want to read. I didn’t want to write. I just wanted my father to stop being ashamed of me.”

With The End of Eddy having become an international bestseller and now being released in English for the first time, Louis has earned his father’s respect. But his goal in life now has become to further upset the literary world and produce radical work that combats the violence he continues to see. Louis recalls that when Eddy was first released, a journalist wondered what kind of books he would have written if he had grown up like Proust, knitting on his grandmother’s lap. “If I was from a bourgeois milieu, she would have never said, ‘I don't know what this boy would have written if he grew up in a jobless family with a father whose back was destroyed by work in a factory,’ ” says Louis. “If you want to make a radical piece of literature, you have to bring these things that are excluded.”

Rhett Morgan is a writer and translator living in Paris.