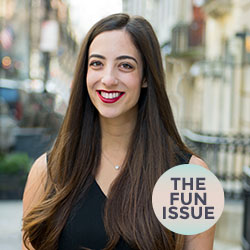 Hannah Orenstein is a writer who loves love. “I think I love the universality of it,” she tells me by phone from her office at Elite Daily, where she is the dating editor. “Everybody has a story; everybody has fears and anxieties and hopes and dreams.” She loves the timelessness of love. “My parents were still dealing with the same concerns and questions when they were dating in the ’80s as I am now,” she says. They had singles mixers and she has apps, but deep down, it’s all variations on the same. She loves that about love.

Orenstein fell in love with loving love as a kid in Boston, as a very young devotee of the “Dinner with Cupid” column in the Boston Globe Sunday magazine. Every week, it chronicled both sides of a blind date between two single Bostonians. (“With so much in common,” read a recent subhead, “will this nurse and salesman be a match?”) “I would read this every Sunday growing up with my dad, when I was in middle school, when I was in high school, and when I moved to New York for college, my dad would take a picture of the magazine and send it to me every weekend. That was the thing that we bonded over,” she says.

She loved the idea of matchmaking so much that as a journalism student at NYU, she started running her own version, “Now Kiss,” for one of the school’s blogs. She liked it so much, in fact, that, as a college intern at Elle, she pitched herself to the magazine’s advice columnist E. Jean Carroll, who she knew also ran a matchmaking service. Within minutes she had an email back: “Will you please come work for me?” Which is how, barely old enough to drink, she began her seven-month stint as a professional matchmaker.

The experience was obvious fodder for Playing with Matches, her debut novel. “I always had wanted to write a book, and once I started working as a matchmaker, I was suddenly plunged into this world that was really unique,” she says. “I was meeting all of these really fascinating characters, and I thought it was such an interesting cross-section of New York.”

On the surface, at least, Sasha Goldberg, the protagonist of Playing with Matches, bears some obvious resemblances to her author. She is a newly-minted NYU journalism grad with a gig at Bliss, an upscale matchmaking service, helping clients twice her age find love while trying to navigate adulthood herself. “I think your very early 20s, when you’ve just graduated from college, is such a specific time where you’re feeling really lost, a lot is changing all at once, it’s very overwhelming,” says Orenstein, who, at 25, is just barely removed from this particular overwhelm herself.

Despite their obvious similarities, though, Orenstein insists that while the novel may be loosely inspired by her own experiences, it is definitely not a thinly veiled memoir. “I really didn’t want to write about myself because it just seems boring to me,” she says. For one thing, Orenstein points out, Sasha deliberately comes from a very different background: She is the daughter of a Russian mail-order bride. “I think that would really change the way you look at love,” she says, a current that ripples through the book. “The places where my life seems too boring, I tried to make her more interesting.”