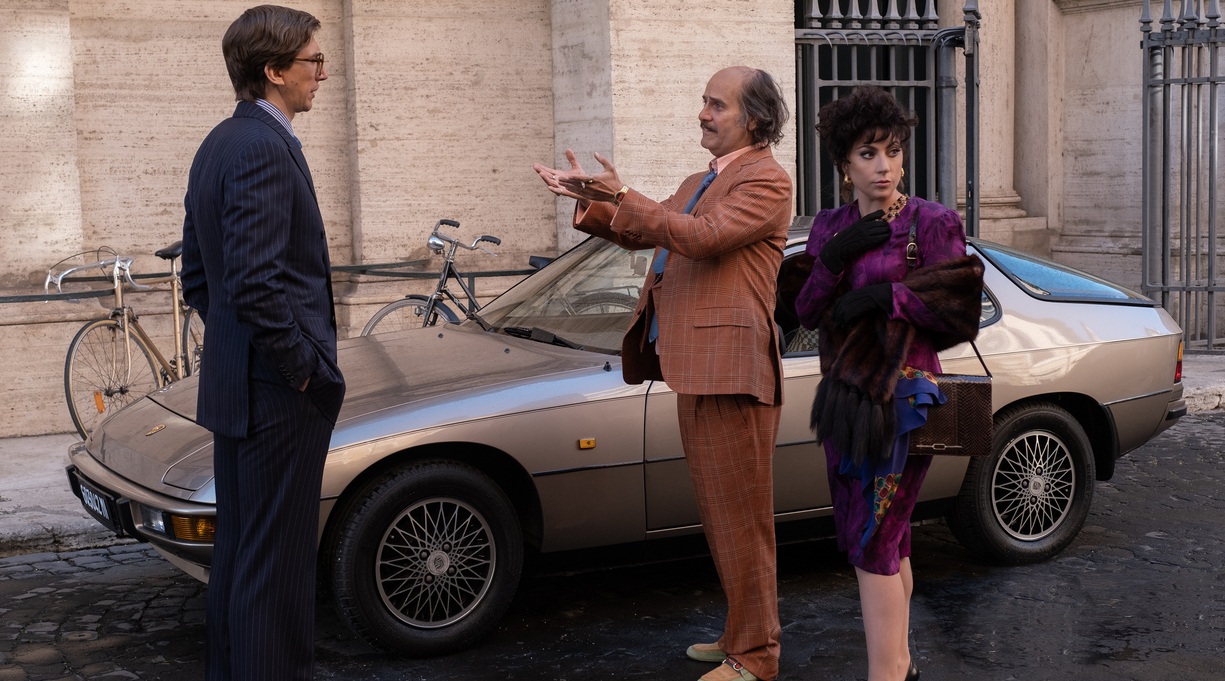 The Gucci fashion house began as a small shop, founded in Florence, Italy, by Guccio Gucci in 1921, which imported and sold leather luggage. After World War II, it became synonymous with Italian chic, supplying the rich and famous with signature bamboo-handled bags, stylish moccasin shoes, and other accessories. By 1990, it was a premier fashion house that became a showcase for the work of designer Tom Ford. But infighting among members of the Gucci family had become fierce, reaching a bloody crescendo in 1995, when Maurizio Gucci was gunned down by a hitman hired by his ex-wife, Patrizia Reggiani. By then, none of the members of the Gucci family were involved with the company that bore their name. A new theatrical film, House of Gucci, brings the story of the Guccis from the 1970s to the '90s to the big screen with Adam Driver, Lady Gaga, and Academy Award winners Jared Leto, Al Pacino, and Jeremy Irons. It’s based on a true-crime biography by Sara Gay Forden and premiering Wednesday.

Forden, a former Milan bureau chief for Women’s Wear Daily, brings her extensive experience in the fashion world to her account of the Gucci family, which was first published in 2000; an updated edition appeared this year. Her style is straightforward and reportorial, in fine true-crime style—although she engagingly dwells on the fashion aspect of the Gucci story, such as how some of its signature creations came to be. However, she doesn’t skimp on details about the colorful Gucci family. She effectively shows how Guccio’s son Aldo (played with uncharacteristic subtlety by Pacino in the film) expanded the Gucci brand worldwide and increased its importance in the fashion world, but she also points out his financial mismanagement and tax scandals, as well as his troubled relationship with his son, Paulo (Leto); the latter attempted to start his own company with the Gucci name, leading to lawsuit drama. The book’s focus, though, is on Guccio’s other grandson, Maurizio (Driver), who ended up in control of the company, and his turbulent relationship with his wife, Patrizia (Gaga), whom he married in defiance of his father, Rodolfo (Irons); the patriarch thought that Patrizia, whose family owned a trucking company, was only after the Gucci family’s wealth. Forden’s account strongly implies that Rodolfo was right about this—as does the film version, helmed by acclaimed director Ridley Scott.

Forden’s book is subtitled A True Story of Murder, Madness, Glamour, and Greed, although it’s a less sensational work than that phrase implies. Scott’s film, however, leans into the melodrama, unafraid to turn the Guccis into figures of fun. The most distracting element of the film, by far, is the fact that all the actors proclaim their dialogue in broad, Italian-accented English—meant to imply that they’re all speaking Italian to one another. It may have looked good on paper, but it’s a bizarre choice in practice; it’s very hard not to feel like the filmmakers are playing foreign accents for laughs—especially in the case of Leto, who plays Paulo as a clownish dolt given to such skewed turns of phrase as “you lying sack-a potatoes.” Gaga’s accent is often jarring, although she puts it to good use in later sections of the story, when Patrizia and Maurizio’s marriage hits the skids—in part due to Patrizia’s aggressive involvement in the Gucci business, which accelerates rifts in the family. At one point, Gaga, as Patrizia, leaves an answering-machine message for Maurizio, declaring that he’s “a painful appendage that must be removed” in a toothsome accent that feels like an Italian iteration of Rocky and Bullwinkle’s Natasha.

The biggest problem with the film, though, is not that some of the performances are over the top—it’s that only a few of them are. Driver, for instance, plays Maurizio absolutely straight, revealing him as an initially naïve but ultimately ruthless man; Irons, too, plays Rodolfo with characteristic chilliness, and although he fires off a laugh-line here and there, it’s a dramatic performance, through and through—one that clashes badly with the flailing mannerisms of Leto.

Scott rarely lingers on the Gucci fashions themselves; the clothing and accessories appear in the background as various Guccis scream at each other. Even the clothing that the characters wear is merely suitable when it should be jaw-dropping. It’s akin to making a movie about Julia Child and pushing the food off to the side of the frame. Despite the movie’s considerable length—some two and a half hours—hardly any of it involves the murder or its aftermath; even the planning of the crime, which involves Salma Hayek in a small but fun role as Patrizia’s personal psychic, gets short shrift. True-crime aficionados should look to the book for their fix; the film, by comparison, is an emperor with no clothes.