The Injustice of Myth 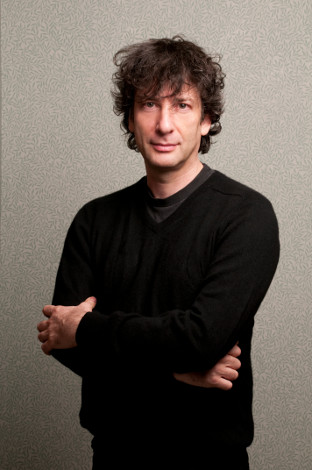 Neil Gaiman is a very, very busy man. He’s writing a prequel to his fanatically adored Sandman comic-book series. He’s recording a role in The Fall of the Kings—part of Neil Gaiman Presents, an audiobook imprint raising awareness of seminal, sometimes-neglected, and personally beloved works, mainly in the sci-fi and fantasy genres. He’s also negotiating the publication rights to the six-part audio miniseries adaptation of his first novel, Neverwhere, broadcast on BBC Radio 4 this past spring, and he’s plotting with HBO to get a series based on his book American Gods on the air.

It was therefore a minor miracle that I managed to score a few minutes to speak to Gaiman about his new novel, The Ocean at the End of the Lane, a slim volume that’s his first book for adults in several years. It begins with the middle-aged narrator returning to the English countryside of his childhood for a funeral.

He finds himself at neighboring Hempstock Farm and suddenly remembering the curious events that occurred when he was 7: A former opal miner killed himself in his parents’ car, which led to the boy meeting and befriending (apparently) 11-year-old Lettie Hempstock. Lettie is a bit…odd; for one thing, she claims that the pond on her farm is really an ocean. For another, she takes him on a journey right out of this world, a trip which unfortunately creates an inadvertent connection between the narrator and a sinister creature who covertly returns home with him and ultimately assumes the position of his family’s new housekeeper.

“This is a book about memory if it’s about anything else,” says Gaiman. Although the narrator subsequently forgets these literally life-changing events (for reasons revealed later in the story), they clearly affect him profoundly. “I really do hope he’s a better person at the end of the book. I think he is.”

Readers will soon notice that neither the narrator nor anyone in his family has a name. “There was a short period where the narrator had a name, but…I lost that sentence [in a revision],” Gaiman notes. There’s also a “primal quality” of leaving people nameless. “It was something I’d done before, in Violent Cases and in Mr. Punch, where the narrator is a sort of me at that age.” The family is not quite Neil Gaiman’s family: It’s missing one of his two sisters, and Gaiman assures me that a particularly monstrous act by the novel’s father is pure fiction. Nevertheless, Gaiman admits, the book is “weirdly personal. On the one hand, it’s not true. On the other hand, it’s as close to a look at a 7-year-old Neil Gaiman as you’ll get.”

The novel also shares some notable elements with Gaiman’s young-adult novel Coraline. In both books, a child must face an evil masquerading as a human adult, and the child’s parents are of absolutely no help. Gaiman notes that someone once told him that Coraline was an “immoral book” because it involves a child setting herself against an adult and winning. The same week he received that complaint, he read an article about a 9-year-old girl making a supreme effort to escape her adult kidnappers, suggesting that kind of opposition can be necessary and, indeed, admirable in real life as well as fiction.

But such resistance doesn’t come easy. In The Ocean at the End of the Lane, Gaiman particularly wanted to emphasize how difficult it is for children to cope with the adult world and the profundity of the power differential between children and grown-ups. At its most basic, “adults are bigger and they can pick you up,” he points out.

Children against monstrous adults—the theme might bring fairy tales like “Hansel and Gretel” and “The Juniper Tree” to mind. But Gaiman definitely does

not want the reader to think of this book as a fairy tale. Rather, it draws more from myth. Gaiman regards that distinction as extremely important. “Fairy tales have an intrinsic set of rules,” he argues. But “myths have no justice. You don’t have to do something wrong to have something terrible happen to you” in a myth, he says. “There is no feeling that the story itself will sustain you and look after you. You can rely on the hero getting to the end of the fairy tale not because of virtue on his part, but because he is the lead character. There’s no such feeling that a myth is going to take care of you.”

Gaiman hopes that The Ocean at the End of the Lane partakes of myth’s weighty, inevitable texture. “I wanted to write something that seemed as if it had always been there. I think that’s my favorite bit; after you write something, you can’t quite imagine the world without it.”

The women of Hempstock Farm—the young-seeming Lettie, her mother, Ginnie, and Lettie’s grandmother—have a strongly mythic quality to them, certainly. Could they be a recurrence of the triple goddess who played such an important role in Sandman? Maybe. But, Gaiman offers, it’s “definitely possible that it’s weirder than one person in three aspects. There’s nothing goddess-y about the Hempstock ladies. They do not want your worship. They barely want your respect.” He claims as his inspiration Henry Kuttner’s Hogben stories about a clan of mutant hillbillies. Gaiman read the stories as a child, and they obviously made a strong impact: In his clearly nonexistent spare time, he’s co-helming a successfully funded Kickstarter campaign to publish them in a single collection, entitled The Hogben Chronicles.

While the imagined young Gaiman may be somewhat of a victim of myth, the adult, real-life writer Gaiman seems to be some kind of creative shark. He’s continually in motion, taking on more and more new projects and looking for fresh ways to astonish his ever-growing audience of readers, listeners, viewers and, of course, Twitter followers.

Amy Goldschlager is an editor and book/audiobook reviewer who lives in New York City. She has worked for several major publishers and has also contributed to the Los Angeles Review of Books, Locus, ComicMix and AudioFile magazine.