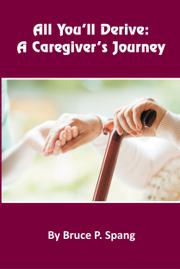 “Gardening has always been a way of focusing my energy,” says Bruce Spang, the poet and novelist whose new book of poems is called All You’ll Derive. As an avid gardener, Spang sees similarities between the practice of horticulture and the art of writing. “Gardening puts me in contact with the natural world, a world without language, a world always wanting to be wild, untamed, and which, as a result, forces me to abide by its nature.” Though he grew up watching his mother tend to her tidy garden, his approach has allowed more unkempt sprawl and disorder, a principle he applies to his prose and poetry. “That’s essentially what good writing is: trying to tame the language while letting it have its say.”

The cultivation and beauty of plants is a prominent theme in All You’ll Derive, which is a tribute to the first gardener he knew: his mother, Anna, who died in 2019 at the age of 100. In the last three years of her life, Anna gradually began to decline. She experienced a series of injuries and started to show signs of dementia. At a certain point, she could no longer live on her own in her condo in Florida, and Spang and his husband moved her to their home in North Carolina. With assistance from professional caregivers, they were able to care for her till the very end. “I wrote the book to give testimony about what it’s like to be a caregiver to someone requiring 24/7 care,” Spang says. He dedicates this book to such caregivers, professionals and amateurs alike, who take on the arduous task of helping people through the final stages of life.

For Spang, observing the flowers is also a way of seeing his mother: “I remember the flowers, how she loved to look / at the simple beauty of their being.” The poem “Grief in High Summer” ends with his mother accepting her death: “letting go / as petals do when the time comes.” “In our culture there’s a real fear of death and denial of death,” says Spang. In his view, writers have a deep sense of mortality, which they grapple with every day.

Although flowers come up again and again, Spang knows that florid terms won’t do to describe his mother’s decline. He aims to look at it more honestly as a physical reality and avoid some preconceived ideas of what it means to lose someone. In “Monitoring,” he writes, “The world as we know it / becomes the ten steps from the bed / to the toilet.” In another poem, he describes her remains as a “plastic bag.” To Spang, even her funeral seemed a touch overdone. “We don’t need to pretend she’s immortal,” he recalls thinking.

Most of the collection’s earlier poems capture Spang’s childhood memories. Caring for his first caregiver—his mother—prompts him to return to the days of his youth. In “Where the Words Take Us,” the speaker is a boy learning to read. In “Uncle Jonny,” the speaker and his brother watch television while sipping tomato soup. In “The Mother’s Calling,” the speaker observes his brother cowering after breaking their father’s bottle of gin; their mother waits tensely for the storm to pass. In these poems, Spang’s mother is a mythic figure of comfort and safety, hovering over the proceedings. But in “The Sweetness,” the collection jumps ahead. His mother is 93 now, in the last few years of her physically active and mentally present old age. Soon, the caregiver will become the cared for, and vice versa.

All You’ll Derive is Spang’s fifth book of poetry, but he has also written two novels,The Deception of the Thrush and Those Close Beside Me. Set in the 1960s, the novels feature a protagonist, Jason, figuring out his identity while the status quo of American culture is under fire and historic powers threaten to tear the world apart. This is a governing interest of Spang’s work: the fate of the individual. “These are the issues I’ve worked with throughout my writing: What is it to be who you are, and how do you come to terms with it?” asks Spang.

As a poet and novelist, Spang allows the disciplines to inform one another. Points of wonderful lyricism dot his prose, and his poetry is ordered by a narrative sense of sequence. “When I’m putting together a poem,” he says, “I usually frame it more as a story—a story told through images.” As a writer working in both disciplines, he has been drawn to the work of writers who explore both prose and verse, such as Elizabeth Bishop and Raymond Carver. But the work of the poet Stanley Kunitz, especially his first collection of poems, The Wild Braid, was most informative to Spang’s own project in All You’ll Derive. According to Spang, it was Kunitz who came closest to capturing his own understanding of grief.

Although Spang’s book is full of sorrow, he doesn’t see grief as a bad thing. When a woman sends condolences such as “death is not natural,” the speaker responds: “Maybe, Elaine, you / want to live forever. Maybe I’m / wrong but that seems even / sadder than death since no one / would grieve your leaving.” In Spang’s view, grief isn’t tragic. It hurts, but it can also feel good. He describes his own grief as a physical sensation, “grief that almost vibrates” and binds him to his mother more intimately. “The sadness is pleasurable,” he says. The feeling amazes him.

Spang acknowledges that writers are often preoccupied with death. But All You’ll Derive is more about the power of grief than the mystery of death. Lately Spang has found himself drawn to writers like Kunitz, who thoroughly mined grief for meaning. “I think most of them, as I have tried to do, speak of its wonder,” Spang says. “It’s mystery. It’s vocabulary of wanting and loss. And, as such, grief for me always falls into the category of an emotion to celebrate and include as one of our best emotions and one that speaks to our humanity and compassion and empathy.”