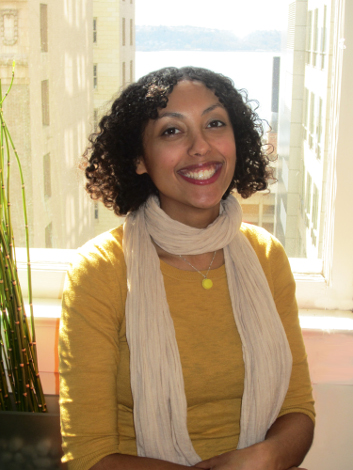 Jessixa Bagley takes the long view of her career and likens it to the art of the mix tape. “You start off with a bang,” she explains, “then the next song pulls you in a little different direction, but there is a similar vibe. Then, by the third track, you have to surprise the audience to get their attention again, and so on. I can’t keep making the same book over and over again. I need to keep creating in a way that feels authentic to me. If you stop to think too hard, that’s when you will trip over yourself.

It’s a plan that seems to be working. Bagley’s debut picture book, Boats for Papa, was embraced by critics and readers alike at its release last year. Named an ALA Notable Children’s Book, it also garnered Caldecott buzz. The book’s absence of any shiny sticker in 2016 doesn’t deter Bagley, who described all the awards chatter as surreal, flattering, and humbling all at once. “I was just so happy that my book was in people’s hands and making a personal connection,” she says. “The fact that it was talked about for awards was icing on an already triple-iced cake.”

Asking if all the acclaim made her fret while working on her second book, Before I Leave, is moot. As part of her publishing contract, she had already begun work on it immediately after finishing Boats for Papa and adds, “I didn’t give myself the luxury of a major freak-out.” The book features two best friends, a hedgehog and anteater. (Describing them as “outcast critters,” Bagley agrees that anteaters are sorely underre

presented in children’s literature.) When the hedgehog learns she and her family have to move, the two friends play one last time “like nothing is changing,” creating new memories and saying farewell. It’s a tender and sweet, yet never cloying, story of friendship, and Bagley wrote it from experience. “I remember the feeling of loving a best friend so much,” she says, “and then feeling like your world is ending when you move away. It’s a very emotional thing to go through as a child.”

The writing is spare. Bagley was conscious of leaving room for the book’s emotions to breathe. Top of her mind was nailing the story’s sentiment and guarding against sentimentality, a distinction she once read about in an interview with Tomie dePaola. “I love making books that are authentic and make people feel,” she explains, “but often in an effort to chase those feels, it comes off as if you are trying too hard. I keep a critical eye on the writing, monitoring if I’ve accidentally wandered into that Valley of Cheese.”

In sticking to her own musical analogy, Bagley’s third track—next year’s Laundry Day—will mix things up. It will, in her words, have no “heavy feels” and will not require the reader to have tissues on hand. Her editor, Neal Porter, likes to describe it as a complete lark. “It might sound strange to switch gears from my emotional books,” Bagley says, “but this was such a fun experience, creating something that is just silly and funny.” After that, she’s especially excited to collaborate with illustrator Aaron Bagley, her husband, on Vincent Comes Home, scheduled for 2018.

What will come next in her mix tape of a career remains to be seen, but something tells me Bagley will enjoy the process as well as be open to her readers’ responses. “One of the greatest things about making art,” she adds,” is that you put this thing into the world that comes completely from you and your experiences. And if it resonates with people, it’s likely because they are getting something completely different out of it, something that is personal to them.”