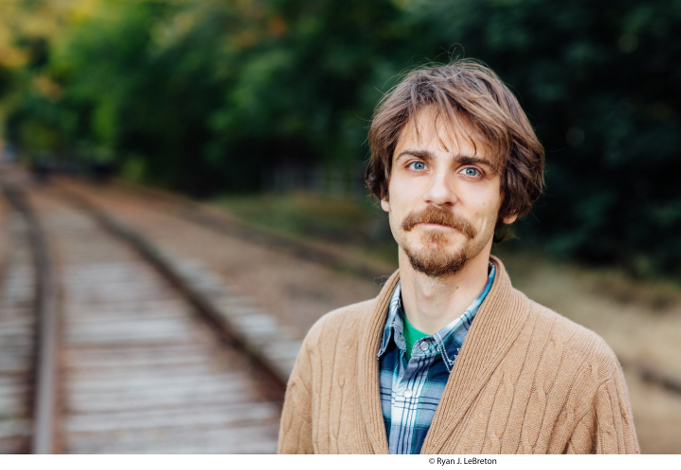 Joseph Scapellato isn’t from the west—he grew up in suburban Chicago—but like so many Americans, the mythic west was always nearby.  “My mom was and is an enormous fan of golden age Westerns: Gene Autry, Roy Rogers, all those dudes in white hats,” Scapellato says. “I grew up watching those, and she accumulated all these cowboy tchotchkes. I grew up with all that.”

Later, Scapellato discovered the darker Western films from directors such as Sam Peckinpah and Sergio Leone. By the time he arrived in New Mexico for graduate school, Scapellato knew the myth, not the reality. “I went to New Mexico with the West in my imagination vividly,” Scapellato says. And the reality proved even more alluring than the stories. “[The West] became even more mysterious. I couldn’t stare at the mountains enough. Somehow it all became way more mysterious than the reductive myths portrayed in cinema.”

Big Lonesome, Scapellato’s debut collection of short stories, is his attempt to process and come to terms with a part of the country that he’s homesick for, even though it was only his home for a few years.

After attending the Creative Writing MFA program at New Mexico State University in Las Cruces, Scapellato moved to Pennsylvania with his soon-to-be wife. The change was dramatic. “My life completely shifted,” Scapellato says. “To move from the dramatic Southwest landscape to the lush green, low, old landscape of Pennsylvania made me miss being in New Mexico even more. I felt an urgency to get some of my experiences that I had in New Mexico into my work. To preserve it or understand it.”

The result is a collection of uncommon breadth and style. Big Lonesome is split into three parts: Old West, New West, and Post-West. Each section contains stories that stretch from a single page to a more traditional length. In terms of story and plot, Scapellato’s work isn’t afraid to push boundaries and invent a type of postmodern Western narrative that’s rare and exhilarating.

“Cowgirl” is about a human girl born from a cow. “Horseman Cowboy” is a story about a stoic, silent cowboy who suffers heartbreak and violence—often due to his own actions. He also happens to be a satyr.

Yet Scapellato’s flourishes are never arbitrary. “In ‘Horseman Cowboy’ I’m trying to depict the danger of hyper-masculine identity,” he says. “That’s encouraged by the mythology of the West: be a cowboy. Don’t talk about your feelings. That can destroy the people around you.”

Many of the stories that are clearly about actual humans take a turn to the violent and surreal. In emotional terms, “Mutt-Face” is about a man struggling with his own feelings of inadequacy and loneliness. It’s also about a guy who gets beat up and then tied to a chair by an old woman and her son:

“She sat herself at the opposite end of the table, staring at him in the way that old folks have of trying to turn what they see into somewhere else, somewhere they’ve been before, way back.

The mutt-faced cowboy wriggled at his bonds. A pair of hands clamped his shoulders, heavy ones. He smelled bleach and lemons and knew the man behind him to be the biker that had broke his teeth…”

Despite the narrative experimentation, the stories retain an emotional core that prevents them from slipping into alienating experiments for the sake of experimentation. “I’m attracted to surprise,” Scapellato says. “But I’m always trying to ground them in some reality. The exaggeration that’s not an exaggeration.”

Even though there are few, if any, authors that combine surrealism with a grounding in the American West, Scapellato feels like he’s part of a long tradition that goes back to Greek and Roman myths. “Myth was my first love. It’s still the thing I go back to. Myth is a kind of narrative that looks like a story but moves like a poem. That’s what I try to do in these stories.”

Richard Z. Santos is a writer and teacher living in Austin. His fiction, essays, and interviews have appeared in the Morning News, the Rumpus, Kill Author, the Texas Observer, and many others.