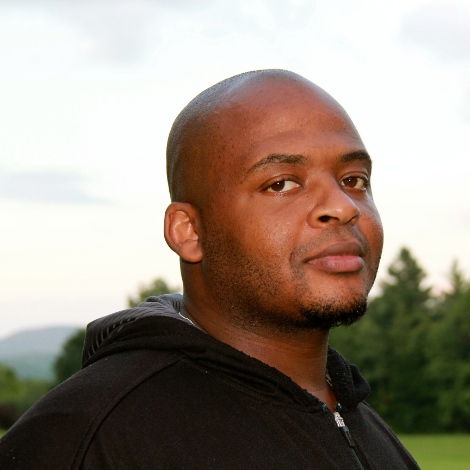 Emphatic and unsparing, Kiese Laymon’s Heavy explores the weight of wellness in a culture obsessed with lean. His expansive intelligence and fluid prose bear up to haunting family secrets and American deceptions with deep, potent wells of beauty, humor, and empathy.

Initially conceived as a weight-loss story chronicling his family’s struggles with food and violence, the writing of Heavy, which was recently named a finalist for the 2018 Kirkus Prize for Nonfiction, got murkier when relatives sidestepped his interview questions or lied altogether. “We’re a family, like most families, of addicts, but we never talked about the addiction,” he says. “We would talk about losing weight or gaining weight but we never talked about why. We never talked about particular memories around domestic, sexual, and racial violence.”

He became convinced that no one in his family wanted to reckon with the weight of where they had been or do the work of freeing themselves of it. “You need to keep that for your journal,” his mother would say of the revealing material he wished to mine for the book. “Nobody else needs to see that kind of writing.”

Laymon disagreed and drafted chapters directed to his grandmother, mother, and aunt one by one, determined to revisit the leaden truths they preferred to ignore. But writing to so many people began to feel like an evasion too. The person he most needed to address, most feared addressing, was his mother. In the final draft, he wrote only to her, from cover to cover.

“When you revise a book like this, of course, you’re aware that there’s something you might have to explain because there are readers out there who are not the direct audience,” he says. “But the skeleton, muscle, and, I would say, even the skin of this is definitely written to my mom.”

The approach is audacious. Letters of advice and apology from parent or elder to child abound, but a child’s chronicle of physical and emotional abuses directly addressing the parent is rare. To Laymon, it felt right to train his words on the person who introduced him to books and gave him so many stories to tell. It was his mother, after all, who made him write every morning for an hour and a half and again before bed, a practice he maintains to this day. It was his mother who made him think writing was a way to understand the world.

And so he wrote to her about a lifetime of unspeakable things—beatings and molestations, gambling and gorging, getting hurt and hurting others. “I just didn’t want to write to a generic reader about that,” he says of their disquieting tangles with abuse, addiction, and one another. “I wanted to write to my mom about that.”

He credits reading authors like Toni Cade Bambara, Toni Morrison, and James Baldwin with showing him that the sticky, messy, traumatic cracks of life are the most important parts to explore. “The kind of writing my mama taught me to do just could not seep into those cracks, but I could not seep into those cracks if my mama didn’t encourage me to have the writerly practice it necessitated to fall in those cracks,” he explains.

Thirty years in the making, Heavy is dense with detail thanks to volumes and volumes of journals that Laymon has kept since childhood; margin scribblings in treasured books; family photos over the years; and more recent interviews and conversations. Several passages explicitly refer to the process of writing and remembering. In this way, he reveals the labor, thick with revision and reappraisal, that it takes to render memory honestly.

It’s a testament to the depth of his research, the patience of his process, and the nuances of his writing that the book reads as more entreaty than accusation. Heavy’severy line begs for a tender, motherly response with little evidence that a satisfying one could ever be forthcoming.

The power of Laymon’s writing, then, is not in what he asks of his mother but in what he claims and proclaims for himself. Heavy insists that healing requires baring significant weight—the heft of memories, one’s own weight, others’ weight—not only bearing it.