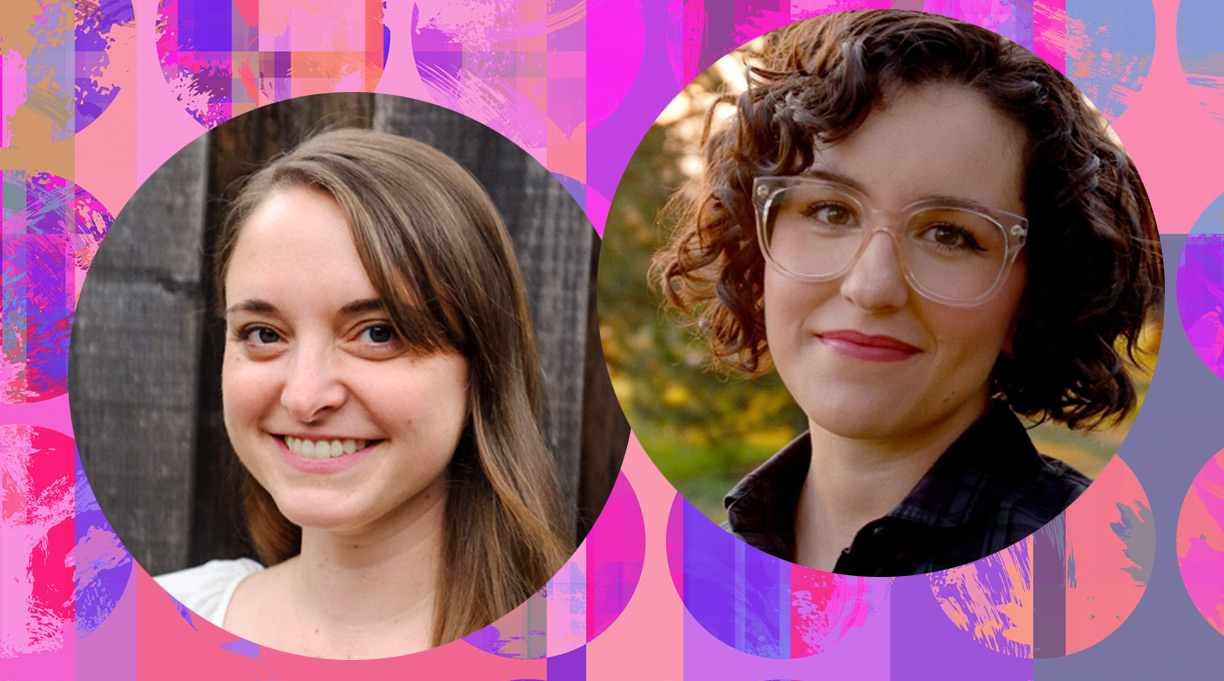 In Go With the Flow (First Second, Jan. 14), a new middle-grade graphic novel by Lily Williams and Karen Schneeman, with illustrations by Williams, menstruation is presented as an integral part of a story about high school, friendship, and standing up for what you believe in. New girl Sasha meets sophomores Abby, Brit, and Christine when she gets her first period at school and finds herself without a pad or tampon. The girls come to her rescue, but Abby is outraged by the fact that the pad and tampon dispenser in the girls’ bathroom is perpetually empty. What follows is Abby’s crusade for menstrual equity, in which her activist methods test the limits of her friendships. Here, Williams and Schneeman, who became friends while studying at California College of the Arts, answer some questions about the book and their goal to fight the stigma around talking about periods.

How did the idea of friendship factor into your idea to write about menstrual periods?

Lilly Williams: When we started talking with each other about periods, a big component of it was the idea that when you’re friends with people who have periods, you get to this safe space where you can talk about it.

Karen Schneeman: The age that we’re targeting with this book is such an awkward phase where a lot of girls and boys stop talking to their parents as much about stuff. So we wanted to emphasize that, yeah, everyone’s going through this, and it’s OK to talk about it with friends and share that experience and normalize it.

This seems especially important for Brit, whose painful periods have started interfering with her life. Her situation is something that people don’t necessarily understand if it’s not something they’re personally going through.

LW: I have endometriosis and fibroids, so my periods have been very much like Brit’s. We didn’t wrap Brit’s

story up with a bow, because there’s no cure for these issues. In the book they talk about the possibility of seeing a specialist and getting a diagnosis, and we actually had to adjust that because I got a diagnosis right when we were going into the inking phase. And then I had a surgery in the middle of the deadline, so I was kind of going through it with Brit.

Who do you hope buys the book and where would you like to see it end up?

KS: I would really hope that parents use it as a point to start a conversation. And all of the “know your body” teen guides get stolen from libraries consistently because kids are too embarrassed to check them out, or they want to keep them as a reference. So libraries are a big one for us, just to get that information out there.

LW: I really hope a lot of boys read it too. It’s so important for everyone to be talking about this.

The book is such a fun read, I imagine that it wouldn’t be as intimidating as picking up some kind of health guide.

KS: We didn’t want it to feel like we were trying to teach someone something. We wanted to say, this is just part of life and each of our characters have other things going on with each other and with their families.

It’s such an interesting moment to be putting out a book like this, especially when the conversations about reproductive health are…

Do you feel like the conversation is changing at all?

LW: The conversation about periods is definitely more out in the open than it ever has been. I don’t know that it’s always as geared toward kids, so I am interested to hear how our book goes over in that way. But it’s hard to be working on a project and to be hearing in the news where things are going backward when we need to be going so much further forward.

Do you have messages about activism that you want readers to take away?

KS: I do think one of the things that we’re trying to do is to show is that you have power regardless of how people might respond to you. Abby does get kind of beaten down a little bit initially, and it’s easy to give up. So I think we’re giving a message of, if it’s important to you, keep trying.

LW: You can find a way to speak up for things that you feel are unjust or unfair. Giving kids that agency allows them to feel like they’re not just like a hopeless cog in the machine.

Kate Scelsa is a playwright and the author of Fans of the Impossible Life.