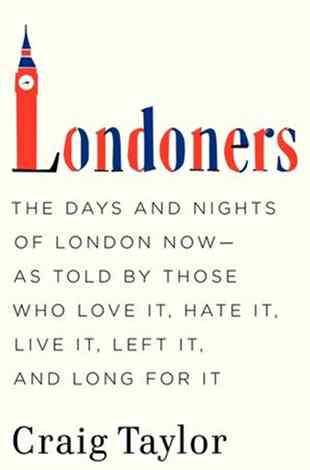 London is a city of voices, captured by the great and small, from Robert Louis Stevenson to Charles Dickens to Zadie Smith. But where are the common people, the outlaws, the refugees, the police and the protestors in the story of the world’s greatest metropolis?

Canadian playwright Craig Taylor has made sure to include those voices in his oral traditional portrait of the city in the 21st century in Londoners: The Days and Nights of London Now—As Told by Those Who Love It, Hate It, Live It, Left It, and Long for It. For this polished collection, he boiled down nearly a million words of raw material into vignettes that we called, “Alternately poignant, uplifting, amusing and sad.”

To what end does your great oral portrait of the city devote itself?

I knew I couldn’t compete with the great histories of London, and by that I mean the great social histories, the books about London’s secret rivers, the insider’s views of Soho, or books on specific streets in London. I didn’t train as a historian, but I knew I could wander the city and speak to as many people as possible. I knew speaking to the residents of the city might just make the book unique. I wanted a democratic mix of voices. The city planner knows a lot about London but so does the manicurist.

One of the most popular series to run in The Guardian was your work One Million Tiny Plays About Britain. How did you first start to listen and record the voices around you in Great Britain?

One Million Tiny Plays About Britain started as a self-published zine. There was plenty of listening, no recording. When I came to London I didn’t know what to do with the onrush of sound—the loud phone conversations on the night buses, the loose chat, the subtle status games that happen every day throughout the city. I started writing down fragments in my notebook, and from those fragments I wrote short plays. They’re meant to look like overheard conversations, but they’re anything but.

What was the typical reaction when you first approached potential subjects about interviews for the book?

I learned very quickly to ask interviewees about specifics. It made the project easier to explain. I didn’t cold-call people and ask if they’d like to set up a date to explain their hopes and dreams and intimate knowledge of London. It’s much easier to ask what a person does. This is a book about the verbs of London, so I wanted to find people who enacted those verbs: cutting, cleaning, buying, selling, loving, hating London.

What concerns emerged about contemporary relevance and current events?

The book is about London now, but much of London now has a direct link to the past. I’m thinking of the fruit sellers and buyers who enact an old ritual out at New Spitalfields market every night from midnight to 9 as they buy and sell and banter and boast. Or the street cleaner, whose testimony, with a few small changes, could have come from the 19th century. There have always been people picking up London’s mess. That topic will always be relevant and will say plenty about what the city was like at that particular moment in time.

What were the essential components of life as a Londoner that you wanted to address?

I wanted to address the ambivalence this city engenders. Luckily, I’m not the mayor of London, so I didn’t have to write a rose-tinted book about the rah-rah wonders of the place. London is hard, cruel and often life-sapping. From early on I needed to find voices who could take whingeing to an operatic level. I wanted the book to include tragedy and horror, like the account of a young man witnessing a suicide in Camden Town tube station, as well as moments of kindness. I wanted moments of revelation to rise organically from the words of others.

There are always stories that necessarily get cut because of time or relevance. What stories do you wish had made the cut for Londoners?

I spoke to a Thames waterman who told a wonderful story about drifting up the Thames when the fog was thick and being able to tell where he was on the river from the old smells still emanating from the brickwork places like Cinnamon Wharf. There were a lot of great stories that didn’t make it, unfortunately.

Now that the book is alive and in print, who sticks with you out of the hundreds of people you interviewed?

I don’t have favorites. I was always impressed when someone I approached for one reason told me another story entirely. I thought I’d be speaking to the currency trader about money. He ended up telling me the story of how he scratched and scrambled and made his way to London and finally fulfilled his dream. I remember sitting in a Costa Coffee, surrounded by commuters, dumbstruck.

What was most important to you to portray through the writing of the book?

There are a lot of ‘official’ voices of London. I’m sure we’re going to hear from them when the Olympics begin. I’m hoping readers out there will be drawn to this book to hear the unofficial voices, which I believe are more eloquent and funny and heartbreaking and true. I got to spend years speaking to these people. I hope readers who are curious about London, or may have lived here, or may have visited, will open this book and learn from the extraordinary cast of characters. I did.

The subtitle of the book is interesting—I am one who left London and longs for it. How do you see yourself in this context?

I love it some days. I hate it on others. When I’m away I long for it. When I’m here I try my best to live it. I try to walk my favorite neighborhoods at twilight. I try to savor the feeling of being a person in this great, ever-changing mass of people. I try to walk on the left and stand on the right side of the escalator.

Clayton Moore is a writer and a photographer based in Boulder, Colo. His work can be found at claywriting.blogspot.com.