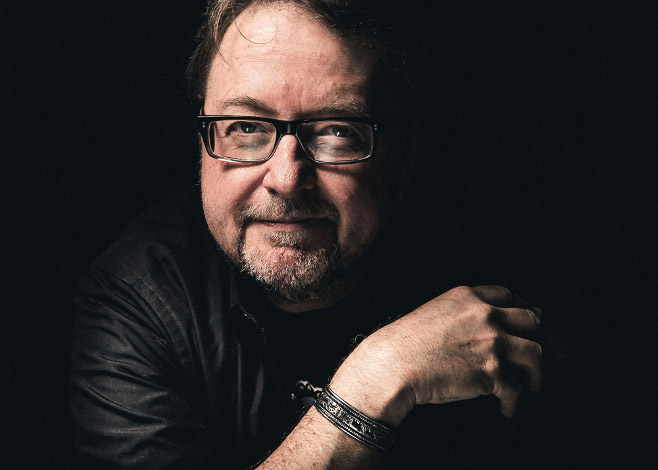 Luis Alberto Urrea is one of America’s foremost chronicles of the messy, swirling, often embarrassing chaos that we politely call “family.” Yet Urrea, a Pulitzer-finalist and a master of multiple genres, didn’t think he was going to write about the death of his half-brother Juan—the experience was too fresh, too devastating.

Then fate brought Urrea and the late novelist Jim Harrison together at the Tucson Festival of Books.

“It was a bucket list event,” Urrea says about spending time with Harrison, who died shortly thereafter. “[Harrison] asked me over supper to tell him the story of my brother’s death. I told him, he sat, listened, and said, ‘Sometimes God hands you a novel. You have to write this.’”

The result is House of Broken Angels, a dizzying, powerful book that wraps its arms around all the emotion and chaos of a large family. The story is based on Urrea’s half-brother Juan, who buried his mother while knowing that he himself was about to die of cancer and then threw himself a massive goodbye party the next day. Big Angel, the novel’s stand-in for Juan, does the same.

“The house seemed to be bulging elastically like an old cartoon--music and dust flying out through the gaping junctures of the bouncing, jiving walls. Big Angel surveyed his domain.”

Big Angel is the heart of the family. He’s the stern but loving father, the imperious older brother, the man whose personality pulls the rest of the world to him.

The novel begins in Big Angel’s point-of-view as he wakes up late, an unheard of occurrence, on the day of his mother’s funeral. Soon the novel slides into the heads of the rest of the family as they scramble to get out the door in time. There’s Big Angel’s wife Perla, his daughter Minnie, his troubled son Lalo, an assortment of siblings, nephews, nieces, neighbors, grandchildren and great grandchildren tucked into nooks and crannies. And there’s Little Angel, Urrea’s stand-in, the younger half-brother from a different mother who loves his family even if he feels unsure about his place within it.

The shifting perspectives swoop the reader through the family and into their history and their secrets. Anyone who’s gone to family get togethers, from funerals to weddings and everything in between, will recognize the loving chaos and uneasy peace treaties that emerge.

“Various feuds and internecine scandals were held in abeyance for the day. It kept them busy, otherwise, shaking their heads over one another’s minor atrocities. Gathering in clandestine kitchen meetings to scissor their victims in absentia.”

Writing this book was so raw and painful that at times Urrea needed his wife to type for him while he dictated through tears. “It was very painful,” Urrea says. “But that’s a gift. You go there and process that stuff and realize you’re helping people process similar things. I wanted to touch people where they live.”

While writing his “Mexican Finnegan’s Wake” Urrea worked to keep all the Spanish, Spanglish, English, different perspectives and slang from turning into chaos.

“It’s my Robert Altman movie. Nashville for Mexicans,” Urrea said. “How could I make the wild swirl of overlapping dialogue work? Part of what helped me was the actual funeral and party. We were there watching this mad swirl.”

Yet the most accurate comparison is to another epic that Urrea and Little Angel identify with not for the violence but for the depiction of a big American family. “The [real life] party scenes in the backyard put me in mind of The Godfather,” Urrea says. “My brother was a little tiny man in a wheelchair, but he had all these people coming to see him. I wanted our families to have the American epic as well. If I could expand it out of the funeral and then the party, I could tell the story of so many of us. Not just Latinos but families.”

So many novelists deflect any suggestion of drawing from their own life, but Urrea doesn’t try to hide the connection. “What matters to me is Juan’s family. All of them want a record of the greatness of this man’s soul,” Urrea says. “One thing that gives my family peace is that my brother Juan is steering this thing from heaven. They absolutely think he co-wrote this with me.”

Urrea has such wisdom and perspective about his brother’s death, that it’s easy to forget that this experience was recent and that the pain is still fresh. After our conversation concluded I realized in embarrassment that I had never offered him my condolences on his loss. After writing a book with so much heart, humor, and tears, it’s clear that more than condolences, he deserves applause.

Richard Z. Santos is a writer and teacher living in Austin. His essays, fiction, interviews, and poetry have appeared in Cosmonauts Avenue, The Morning News, The Rumpus, The San Antonio Express News, and many more. He recently completed his first novel.