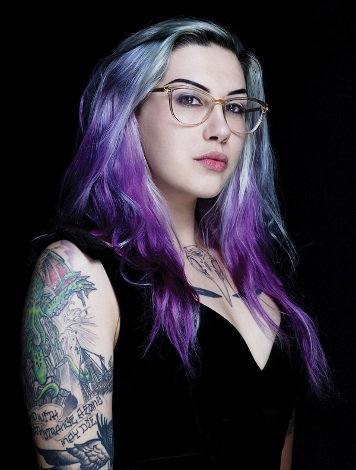 Mallory O’Meara was 17 and a movie monster nerd. She’d already worked her way through all the Universal Pictures monster flicks: Dracula, Frankenstein, The Wolf Man.

Now O’Meara was about to watch Universal’s Creature from the Black Lagoon.The 1954 film tells of a half-man, half-amphibian creature that rises from a dark lagoon in the Amazon to menace men and, in particular, a beautiful woman. Creature scored with critics and at the box office, spawning two sequels. The film continues to fascinate audiences to this day.

“What an afternoon!” O’Meara recalls about watching the film at home. She was struck, in particular, by the creature’s appeal in a plot that alluded to “Beauty and the Beast.”“He was such an empathetic monster; he was not the villain, not the antagonist. I felt for him.”

Combing the internet for details about the film, O’Meara came across a photograph of a woman holding a drawing of the creature’s costume. The woman was identified as Milicent Patrick, yet her name did not appear in the film’s credits. Why had she not been acknowledged?

“I wanted to know what happened to Milicent,” O’Meara says. “What was her story?”

O’Meara recounts that story in The Lady from the Black Lagoon: Hollywood Monsters and the Lost Legacy of Milicent Patrick. “The passionately written biography will do much to bring Patrick the recognition she deserves,” Kirkus’ reviewer writes.

Many sources O’Meara interviewed—usually male—shrugged off Patrick’s work, denying the possibility that she’d designed the creature’s costume. “I think she was somebody’s girlfriend,” one man said to O’Meara. O’Meara was already familiar with this sort of male chauvinism. Working on a film, she was confronted by an actor, whom she doesn’t name, who asked, “How often do you have to sleep with [the director] to keep your job?”

A determined O’Meara eventually learned that Patrick had a significant career in Hollywood. At Disney, she became one of the first female animators, working on the Night on Bald Mountain sequence in Fantasia. Patrick soon moved to Universal, where, Mallory verified, she designed the iconic creature’s costume.

“The costume balances horror and sympathy,” O’Meara observes. “It was 100 percent the most important aspect of the film. The film is in the pantheon because of that suit.”

So pleased was Universal with Patrick’s work that they scheduled her on a national promotional tour titled “The Beauty Who Created the Beast.” But Bud Westmore, the temperamental and jealous head of makeup at Universal, balked at the notion of promoting Patrick, so the studio changed the tour title to “The Beauty Who Lives with the Beasts,” robbing Patrick of specific credit for the creature’s costume. When her successful tour ended, Westmore had her fired. (The Westmore family did not reply to O’Meara’s requests for an interview.)

Initially disappointed that Patrick didn’t rebel at her treatment, O’Meara eventually saw those events in the context of the 1950s, and earlier, when most women had no problem watching female characters terrorized by monsters—either on screen or in reality.

“You internalize your culture, you become an extension of your culture,” O’Meara says. “It’s difficult to stand back and say, This is not acceptable.” Although attitudes toward the treatment of women have become more enlightened in the intervening years, O’Meara remains skeptical. “The re-make of King Kong featured one woman without agency. It had a male cast and a male director. Big steps are being taken very slowly.” O’Meara is working to pick up the pace: She’s at work on a young adult guide for girls who want to work in the film industry.