Authors of OUR SECRET LIFE IN THE MOVIES 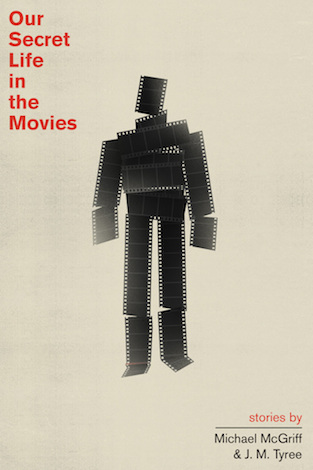 To watch every one of the 1,036 films in the Criterion Collection, you would need to watch almost three films a day for an entire year (you could take 19 days off or watch just two films per day for two of the 12 months). In doing so, you would take in everything from silent nature films of the 1920’s to Blade Runner to classic Japanese cinema. Yet the apparent insanity of such an undertaking didn’t dissuade writers Michael McGriff and J.M. Tyree—they decided to try not only watching all of the films but also writing short stories inspired by them.

Now, they’ve compiled a selection of the stories for their new book, Our Secret Life in the Movies. The book consists of dozens of pairs of ultra-short stories: each of the writers offering their response to the same film. The stories can be read, and appreciated, individually, but taken together they accumulate into a collage-like narrative, telling the story of two narrators growing up in the 1980s, one on the west coast and one in the Midwest.

To describe the book so simply, however, shortchanges much of its dream-like intensity. The stories are very brief, strange snapshots of these two lives, but it’s impossible to fully separate the two. “The book moves vaguely chronologically from early boyhood to adulthood with the two voices running in parallel,” says McGriff, “but then they also kind of snake in and out of each other.” It’s never entirely clear who’s speaking or how the narrative fits together.

To add to the book’s disorienting effect, Tyree and McGriff also decided to leave their names off of the individual stories. The writing process was similarly collaborative: They would watch a film, then one would respond to it, and then, if the first story was good enough, the other would pen a response to both the film and the first story. “It was kind of like jazz band members, taking turns with solos,” says Tyree. Both describe this collaboration as freeing, in part because they have quite different artistic backgrounds: McGriff is a poet while Tyree is a film critic and fiction writer.

The pair first met when they were fellows at Stanford’s Creative Writing department and ended up living together in San Francisco’s Mission District, just a few blocks from Mission Dolores, the site of Carlotta Valdes’ grave in Hitchcock’s Vertigo. They bonded over their shared love of film and, after watching one of the Criterion Collection films, William Greaves’ meta-documentary Symbiopsychotaxiplasm, decided to try to watch the rest of them. And maybe, they thought, that could inspire a book that would replicate the film’s experimental, split-screened structure? It was “a y chromosome project,” says Tyree, one of those “weird projecty things that guys do when they’re roommates and eating a lot of pizza and drinking a lot of sambuca.”

They faced slightly less of a challenge than the current thousand-odd films would pose—they estimate that there were about 700 films in the collection at the time, of which they’d already seen roughly 300. Watching 400 movies in a year seems reasonable enough, and might have been, except that they would watch each film two or three times. “We would watch them, talk about them, rewatch them with video commentary, and then maybe watch them again on our own,” says McGriff. “It was maddening and super fun.” Unsurprisingly, they never managed to make it through all of the movies.

Nonetheless, the two radiate enthusiasm about the Criterion Collection, listing off directors they wanted to include but couldn’t and gushing about those DVD commentaries.

Working through such a diverse group of films, McGriff says, “keeps you inventive and reimagining what a film is and what a piece of fiction is.”

The pair’s relatively similar upbringings form the book’s other foundation: The book is steeped in the remnants of a 1980s childhood. “We found that we had all of these overlapping obsessions,” says McGriff, “growing up in the analog era, being afraid of nuclear annihilation and the Russians, growing up working class.” Reading the book feels much like recalling mostly lost memories, or, perhaps, remembering something that never happened at all.

“If you’re watching two or three films a day, you start to feel like they’re leaking into your brain. You start dreaming about the characters and the images provoke memories,” Tyree says. “Maybe your mind is a little bit warped by the experience.”

Alex Heimbach is a freelance writer. You can find her on Twitter @lexeh. The photo above left is of Michael McGriff and to the right is of J.M. Tyree.