A Former Journalist Sets Mysteries in a Familiar Community 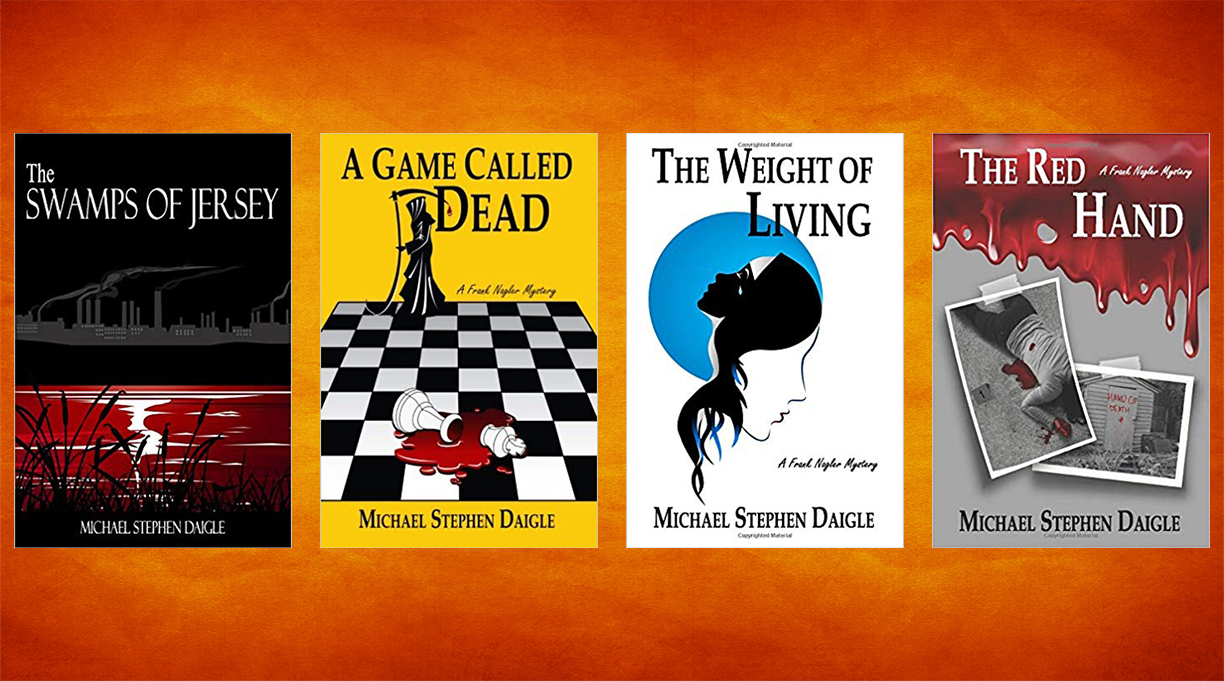 New Jersey–based mystery author Michael Stephen Daigle’s father was in the Navy, and as a result, his family moved all over the Northeastern United States. One thing that helped the young Daigle cope with the constant moves was constant reading. Then, at some point when he was a teenager, he started to dabble in writing himself. “It was a lot of really bad poetry,” he admits, but by the age of 24, he’d written a page-and-a-half story about a simple break-in. Over the course of a 33-year career as a writer and editor for newspapers across the Northeast, starting in the late 1970s, the ideas on those pages inspired more stories, which became the basis for Daigle’s four Frank Nagler mystery novels, published since 2014.

Daigle was first inspired by a news item about a dorm-room break-in at his alma mater, then known as Harpur College, in Binghamton, New York—the type of everyday crime that he would later write about regularly in local papers. But, at the time, he saw something unusual in the incident. “I wrote about a guy feeling out of place on campus, and his revenge was to steal stuff,” he explains. He kept playing with the idea, adding what would happen if someone surprised the thief during a crime, which led him to create a detective character, “which was weird,” Daigle says. “First of all because I never really read mysteries, and second of all, I hadn’t really written anything!”

Readers who are familiar with his Frank Nagler mysteries will recognize this story as the inspiration for his second published book, 2016’s A Game Called Dead, which also includes characters such as Leonard, a blind bookstore owner; and Jimmy Dawson, a local reporter. (“I figure every mystery has to have a newspaper reporter,” Daigle jokes.) Daigle’s later experiences helped him to flesh out his main character. “When I got into the news business in my 30s, it began to change how I looked at the books,” he says. “That’s when the stories began to become more than just, ‘Frank Nagler, crime solver.’ They became ‘Frank Nagler, the last honest man.’ ”

Daigle started working in journalism while living in New Bedford, Massachusetts and writing for a weekly paper in the smaller town across the river: the Fairhaven Advocate. “It wasn’t much of a newsroom,” he says; they only had one computer, reserved for the typesetter. But as humble as it was, Daigle realized that a small newsroom was exactly where he was supposed to be; it was “the best job in the world,” he says.

Still, he did encounter plenty of disturbing events, which eventually informed his mystery plots. His series’ unsettling third installment, 2017’s The Weight of Living, was directly inspired by a possible child sex ring that he’d investigated in Maine. One investigator later told him that one of the victims had been sent to a psychiatric facility to “have her personality reconstructed.” Daigle was unsure if a personality could actually be reconstructed, but the idea sparked the beginning of his novel, which features a mysterious, speechless young girl.

Surprisingly, however, what most sparked Daigle’s imagination were economic development stories in struggling places such as Dover, New Jersey, which became the main inspiration for Nagler’s gritty hometown of Ironton. Kirkus’ review of the author’s latest release, a 2019 prequel novel titled The Red Hand, notes that “Ironton is a character that Daigle brings to atmospheric life.” The author had hoped to make Ironton feel like more than just a fictional setting by populating it with his true experiences of towns ravaged by fleeing industry. In the series’ first entry, the aptly titled The Swamps of Jersey, he gives readers a poetic glimpse of his fictional town’s slow decline:

By the time Nagler had been born, the glorious iron days were a faded memory; some shops hung on like ghosts. The triumphant centerpiece, the great Union Iron Mill that was once a giant humming, burning heart in the center of the city, was torn down and replaced by an urban renewal parking lot. We watched, Nagler recalled. Watched from outside the chain link fence as the machines chewed into the sides and walls of the mill, bit off pieces and ground them up, bite by bite, tearing down the past and leaving an uncertain future in its place. For weeks after the demolition, people clung to the fence and stared; the river, still channeled into the millrace, ran brown with dust and debris for months.

Although each book features murders and plot twists that one expects from a mystery, it’s Daigle’s construction of Ironton’s grim atmosphere that gives them a unique texture. Throughout the first three installments, he thoroughly develops the town’s urban decay as a reflection of its underlying corruption. The author flips that technique with the prequel novel, set 30 years before, which finally depicts Ironton’s last days as a prosperous and desirable place to live.

Daigle paints such a convincing picture because in all the small cities where he worked, he saw former economic powerhouses slowly fading and corrupt developers and local politicians using the situation to their own advantage. It inspired him to create a character that wasn’t just a detective, but also a hopeful figure who could stand up to the powerful elements that were allowing crime to take root. “Somebody needed to stand up and say this is wrong,” Daigle says.

Nagler isn’t the only character with strong moral fiber, though. Daigle’s books feature a slew of strong women that challenge and push the protagonist through each case, including the savvy Lauren Fox, who’s heading up a project to revitalize downtown Ironton, and tough police officer Maria Ramirez. “I didn’t want any of them to be just pretty faces,” he says. “In the newspaper business, some of the best people I worked with were women reporters. They’re very brave, and they’re very smart.” The most important woman in Nagler’s world, though, is his late wife, Martha, whose untimely death provides him with a complex motivation—to recapture the era when she was alive and Ironton hadn’t yet fallen apart.

“He solves the crime, which makes him feel good, but he’s still this confused, broken, lonely guy,” Daigle notes of his conflicted leading man. But he also wanted to make sure that Nagler had flaws and wasn’t a stereotype. Overall, he wanted readers to say, “Jeez, I can relate to some of that,” and many surely will—thanks to the realism that Daigle’s experience lends to both Ironton and its hero detective.