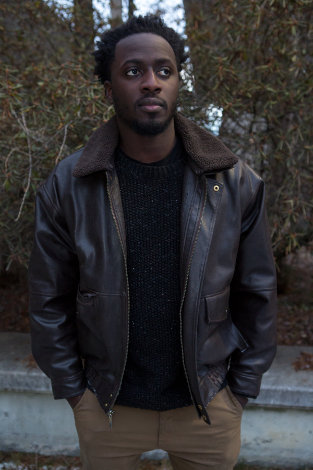 It’s rare to find a short story collection—much less a debut one—that contains so many narrative worlds that they collapse into one highly alarming, present moment. Alternating between fiction and science-fiction, the stories in Nana Kwame Adjei-Brenyah’s Friday Black glide along the wave of racial disparities in America, though they don’t do what some books today do: exclusively present one singular experience in the hopes of shedding light on a more significant issue or a larger preconception. Friday Black is what Netflix’s Black Mirror and Philip K. Dick’s Electric Dreams would look like if they got together and made a book baby—a 10-minutes-from-now story line with enough supernatural elements to help us disbelief its realism, but with profoundly uncanny elements that make us question our own reality. But Adjei-Brenyah’s stories aren’t taken from elsewhere; they’re so singular that the author has expertly crafted a narrative world he can claim exclusively as his own.

Friday Black opens with a story about a white man brutally attacking five black children and teenagers—supposedly to protect his family. After going to trial, the man leaves unscathed. Sound familiar? Adjei-Brenyah proceeds to build up a world where black youth take revenge on white characters, not because the innocent people they murder had it coming but because the world in which they live doesn’t let them be anything other than violent. “I try to be very intentional about violence,” Adjei-Brenyah says. “Black pain, black suffering, black anger. I think the world likes it; they like to sell it.”

So here he is, selling it. But not the way some people might want him to. He’s flipped the paradigm on its back and offers a perspective that elected officials so conveniently neglect. “Most of my stories occupy this difficult space: trying to be humanist to the utmost degree and understand that everyone has the potential to be good and contribute meaningfully,” he says, “but also understand that there are people who, for whatever reason, commit atrocities. People get so caught up in their hatred, aloneness, whatever you want to call it, that they become part of a larger problem we have in our society.”

What comes next is a series of stories that place characters in hyperviolent, post-apocalyptic, and at times, highly palpable scenarios that systematically test their limits, their capacities for sincerity, and their abilities to tackle the roadblocks thrown at them by their family members, bosses, friends, and strangers. Adjei-Brenyah takes a narrative space belonging to a near future—where children are optimized to forget the traditional spectra of emotions and behavior at birth or where people pay admission to a gun-friendly space where they can kill at their leisure—and reminds us that sometimes “future” is just a word, perhaps an idea that allows us to excuse our present actions. “I think that the near future is now most of the time,” he explains. “I present it as near future because I also want the allowance of being a little freer. But, every day, I see something in the news that reminds me that this is today,” he says.

To that effect, Adjei-Brenyah takes the futuristic space of science-fiction and throws it into the present space of fiction, to the point that the experience of reading the book doesn’t feel like you’re stepping out of your present world but rather looking closer into it. “My fiction is concerned with the atrocities we allow daily and that we’ve grown comfortable with because they come in packages that we know,” he explains. “Some of the stories very slightly alter the packaging, and it seems to be shocking and scary.” Changing the packaging that makes up the fabric of our daily experience is precisely what makes this collection of short stories so magnetic. It systematically asks readers to consider both their place on the spectrum of sincerity and accountability,and how much they’re willing to tolerate before taking action.

Adjei-Brenyah beautifully highlights the hypocrisy present in our daily lives. To do so, he takes the retail industry as a foundation, where the most social interactions in the book take place. “Part of being a good salesperson is being personable and being sincere,” says the author. “In the act of pretending to be sincere you actually also end up being sincere.” Maybe we arrive at pure sincerity and empathy through the act of pretending and catching up with ourselves. What’s clear is that Adjei-Brenyah’s tour de force shows us a narrative world where too many characters never reach sincerity, either with themselves or with others—and it’s scary.

Michael Valinsky is a Los Angeles–based writer whose work has been published in the Los Angeles Review of Books and Hyperallergic, among others.