Netflix’s ‘The Dig’: Dry As Dust 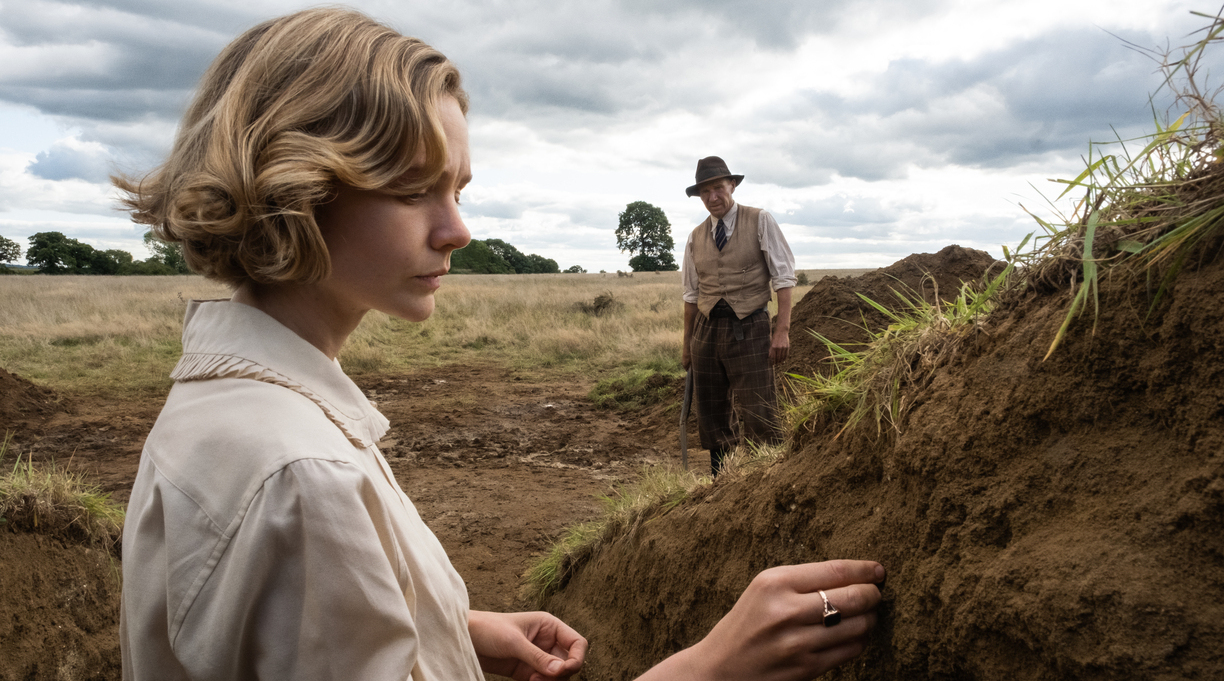 Carey Mulligan and Ralph Fiennes in ‘The Dig.’ Photo by Larry Horricks/Netflix

The Dig, John Preston’s Kirkus-starred 2007 historical novel, is the fictionalized story of a famous real-life 1939 archaeological discovery at Sutton Hoo in Suffolk, England. One of the archaeologists involved was related to the author, and in a 2007 essay for the Telegraph, Preston asserted that “the novel that I’ve written sticks, as far as possible, to what actually happened.” A new Netflix film adaptation of the book, however—premiering on Jan. 29 and starring Carey Mulligan, Ralph Fiennes, and Lily James—buries some facts entirely.

The novel tells the real story in its broad strokes. In the late 1930s, Edith Pretty, a wealthy widow in her 50s with a young son, secured the services of Basil Brown, a middle-aged excavator for the local Ipswich Museum, to investigate several old burial mounds on her property. He unearthed a few promising artifacts before finally discovering an Anglo-Saxon ship burial—one of the most impressive archaeological finds in English history. Officials from the British Museum quickly took over the site, employing the assistance of 20-something archaeologists Peggy Piggott (Preston’s aunt) and her husband, Stuart. Pretty later donated all the finds from the site to the British Museum, before her death from a stroke in 1942.

Preston alternates chapters narrated by Pretty, Brown, or Piggott; a short epilogue assumes the point of view of Pretty’s son, Robert, as an adult. The first-person perspectives are entirely fictional, but for the most part, they take their cues from established fact. Pretty handles the death of her husband with a stiff upper lip; her quest for closure drives an interest in spiritualism. Brown’s sections highlight his endless curiosity and determination. Piggott’s section, however, goes off on a very odd tangent, as Preston tells a story of his aunt’s marital frustration and her powerful (but unconsummated) attraction to Pretty’s 20-something nephew, Rory. It’s an odd tribute to a relative, and one wonders what Aunt Peggy would have thought of it. (She died in 1994 after an accomplished archaeology career.)

The film, directed by Simon Stone, goes even further than Preston did, allowing Piggott (played by James) and Rory (played by Emma’s Johnny Flynn) to give in to their desires and have melodramatic sex in the open air of the Suffolk countryside. It also ends Piggott’s marriage to her husband about 16 years earlier than happened in reality. There are other significant changes: 56-year-old Pretty is played by the 34-year-old Mulligan, who looks like she could be in her late 20s, and her character shows no Spiritualist interest at all. She does have a brand-new, life-threatening heart ailment, however—giving Mulligan, a fine actor, a chance to do more than just stand around and watch the archaeologists work.

Fiennes’ portrayal of Brown effectively conveys the self-taught archaeologist’s sense of wonder, and BAFTA TV Award-winning actor Monica Dolan, in a small role, delivers an unexpectedly affecting performance as Brown’s wife, May. But aside from some breathtaking images by Woman Walks Ahead cinematographer Mike Eley, there’s not much else to recommend the film. The screenplay by Harlots co-creator Moira Buffini lightly touches on themes of mortality and memory, but it does so in a rather unmemorable way. The film feels like a minor trinket—one that’s hardly worth the trouble to dig up.