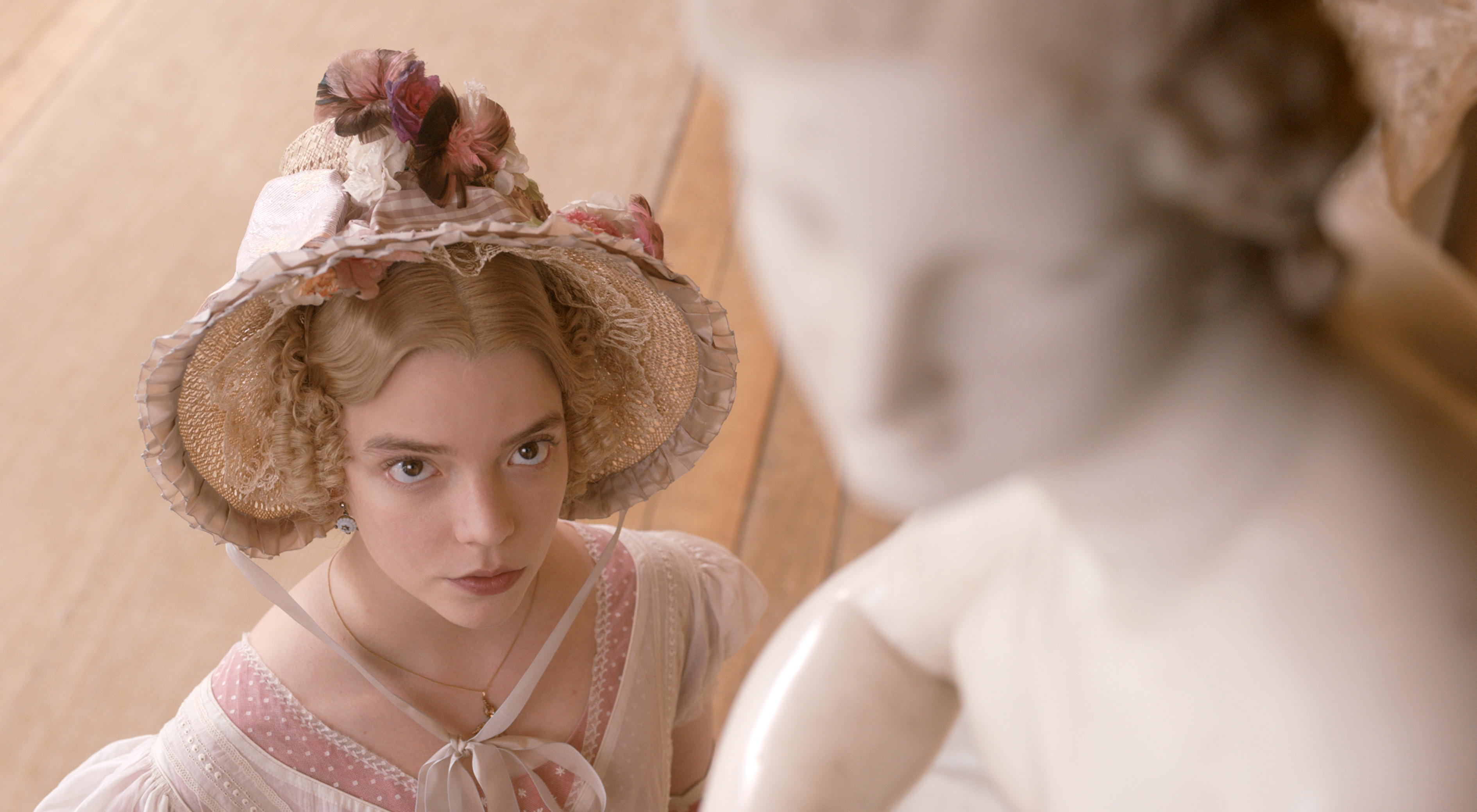 The latest screen adaptation of Jane Austen’s 1815 classic, Emma—getting a wide release on Feb. 21—is visually dazzling. Director Autumn de Wilde, in her first feature, and cinematographer Christopher Blauvelt paint the English town of Highbury in vibrant pastel hues. The costumes, by Oscar-winning designer Alexandra Byrne, are truly wondrous in their casual complexity. The problem with the new Emma film is that its creators, as accomplished as they are, don’t seem very interested in looking much below such surfaces.

The novel, of course, tells the story of “handsome, clever, and rich” 20-year-old Emma Woodhouse, who attempts to find a husband for Harriet Smith, a 17-year-old girl, parentage unknown, who lives at a local boarding school. Emma is set on protecting the teenager from those who are “coarse and unpolished”—that is, poor people, like herself—and introduce her into “good society”—rich people, like Emma. She tries to set Harriet up with a clergyman, but it turns out that he’s horrified at the prospect; he’s interested in Emma, who’s much closer to his own social class—not Harriet, who’s merely a good and decent person.

Emma is also interested in matching herself up with the charming Frank Churchill, but she later becomes disenchanted with him, and it turns out that he’s interested in another young woman, anyway. Instead, Emma ends up with her longtime friend, George Knightley, a 30-something gentleman who just happens to be a wealthy landowner. Harriet marries a local farmer, Robert Martin, who just happens to be in her economic class. Crisis averted.

Austen is famous for her intricate plotting, razor-sharp descriptions, and sparkling dialogue (as when George rather movingly says to Emma, “If I loved you less, I might be able to talk about it more”). She was, however, not particularly known for challenging the mores of the British class system. Everyone in an Austen novel stays firmly in his or her place in the social order; it’s hard not to notice, for example, that servants, though plentiful, are practically invisible. Her contemporary audiences likely thought nothing of these things; such was the way of their world. However, it isn’t today—which makes it a bit odd that the new adaptation makes no effort to criticize, or even particularly acknowledge, Emma’s rigid class consciousness.

For example, at one point, Emma makes a cruel joke about how dull the local chatterbox Miss Bates is—to her face, in the presence of everyone she knows. Shortly afterward, George takes Emma to task, for being “so unfeeling” to someone who isn’t as well-off as she is: “Were she your equal in situation—but, Emma, consider how far this is from being the case. She is poor; she has sunk from the comforts she was born to; and, if she live to old age, must probably sink more. Her situation should secure your compassion.” And her condescension, it would seem!

The film preserves this moment; indeed, Man Booker Prize–winning author Eleanor Catton’s screenplay differs very little from the original text in most respects. It even keeps a tone-deaf scene in which Harriet tells of being harassed by a group of “gipsies.” (In the book, they have the audacity to beg Harriet for money, which Austen describes as an “attack.”) It’s fair to say that the film would have worked just fine without this bit.

The movie, does, at least, add some physical passion to the proceedings. When Emma and George dance at a party, for example, it’s clear that they’re swept away by their feelings for each other; in the book, however, this dance passes without much comment. And the film’s kisses between George and Emma—and between Harriet and her fiance—are surprisingly passionate, indeed, when they finally occur.

The spot-on casting also adds a great deal. Anya Taylor-Joy (The Witch) effectively gets across both Emma’s sharp intelligence and her occasional obliviousness; actor-musician Johnny Flynn brings a riveting intensity to George; Bill Nighy is his usual entertaining self as Emma’s hypochondriac father; and the always brilliant Miranda Hart brings humor and pathos to her portrayal of Miss Bates. However, with all this talent both in front of and behind the camera, one wonders why the resulting film has so little to say. It’s just a comfortable film with a happy disposition, and very little to distress or vex anyone.