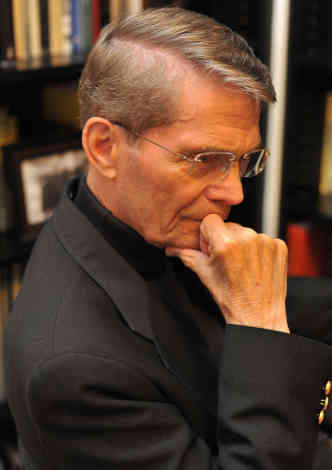 The mention of “religious poetry” might conjure somber sermons, staid devotions and, in darker turns, a few dashes of some good old-fashioned fire and brimstone. But for William Rewak, a Jesuit priest, godly verse isn’t nearly as dramatic, direct or damning.

In The Right Taxi, Rewak’s debut collection of poems, religion has a much more practical, personal hold. The playful verse refers to martini-guzzling rhinos, a pasta-ordering egret and a God who may or may not drive a taxicab. In short, it’s the type of “religious poetry” you might expect from a priest who also has a Ph.D. in literature and has served as a university president, chancellor and poetry professor.

We caught up with Rewak, currently the chancellor of Santa Clara University, to discuss religion’s place in the magical and mundane, his relationship with both animals and death, and the inspiration for the subtle imagery that drives The Right Taxi.

In the book’s opening poem, you mention “the nagging imp” that implores you to write. When did you start hearing it, and what’s kept you from abandoning it?

Well, to some extent, that imp has been with me all my life, in some form or another. I remember my sister and I, in our early teens, creating a loose-leaf book about Roman gladiators: I did the writing, she did the pictures. But poetry developed into an academic interest, actually from my high school reading of Shakespeare, and I taught it for many years. However, I didn’t start writing it until I was 40. Definitely a late bloomer in that regard. I could never give it up now, though there’s always the niggling fear, when I sit down at a blank computer screen, that it may give me up. When you find something you love, something that gives you pleasure and something that wells up inside without your calling for it, you cannot walk away from it.

In the book’s description, you note that “these poems find their meaning, ultimately, in a God...,” yet the poems themselves don’t mention God outright as often as one might expect. Was it a conscious decision to keep the theme indirect?

It was. I wanted the reader to approach the poems without any preconceptions, to be caught up in the argument, or the personality, or the imagery, and then to be led to an unexpected consideration—the possibility, or even the certainty, that a transcendental reality suffuses our lives. If it comes unexpectedly, as a surprise, it makes a greater impact. However, I do write poems more obviously about God, about Jesus, about the events in the Bible, and some of them will appear in a second volume. My fellow Jesuit poets, Jim Torrens and Thomas Flowers, write beautiful religious poetry that is respectful, tough and heart-wrenching, and I would like to follow their example. I’m jealous, too, of how Mary Karr and Franz Wright handle the realization of God in their lives. No pious sentimentality there! They remind me of Hopkins and John Donne.

These poems mention boredom several times and often use imagery of waiting for—or between—events. Do you see boredom and routine as having a significant effect on your life or, in turn, your poetry?

It’s interesting you point that out. I think I would say there is a difference between waiting for something and being bored. Waiting is a condition of human life: We wait to grow up, we wait to see whom we’ll marry; I spent years waiting (and studying) to be ordained a priest. We wait, in a real sense, for death. For those who believe, we wait through what St. Paul calls the “groaning of creation” to arrive at a full birth of joy. But if we don’t understand that such waiting is a part of who we are, then we can become bored; we give in to the humdrum and routine, instead of using the wait time to good advantage. It may be a trivial example, but I always carry a book with me when I go to the doctor’s office. Or the DMV. Or the barber’s. Whatever. And once in a while, I sit and scribble a poem while I’m waiting.

What were some other inspirations for the books’ subject matter? Were there poets who inspired the style?

Well, to some it may seem ghoulish, but death has always been for me both a personal and literary interest. And I’m sure I’m not alone in this; we all have to confront it sooner or later, and it’s best to confront it before it arrives, unexpectedly, on our doorstep. I did my doctoral dissertation on the idea of death in James Agee’s work, and from there, I moved on to the great Whitman elegy on Lincoln, his “Lilacs” poem. Donne’s holy sonnets, Emily Dickinson’s frightening “Because I could not stop for death,” Dana Gioia’s wonderful “Planting a Sequoia.” So it’s an important part of the book: Poems on the death of my father and mother are there. “The Day” is very explicit, as is “The Practice.” Poets who have inspired my style? I’ve liked Denise Levertov’s ideas about the importance of the line and letting the poem grow organically. I’ve shamelessly copied A.R. Ammons’ later couplet structure for many of the poems. I try to make them flow easily and seamlessly from line to line, like John Donne’s “At the round earth’s imagined corners” sonnet or Mary Oliver’s delightful “Making the House Ready for the Lord.”