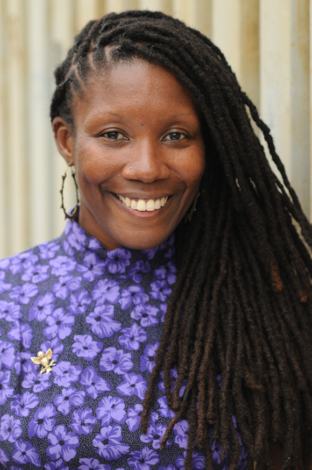 Nicole Dennis-Benn’s latest book, Patsy, revisits some of her previous novel’s themes—intergenerational conflict, race, secrecy, sacrifices, and queer identity. The title character, a lesbian and single mother, immigrates to Brooklyn from Jamaica to reunite with a lost love and build a better future for herself and her young daughter, Tru, whom she leaves behind. Our reviewer writes, “It’s a marker of Dennis-Benn’s masterful prowess at characterization and her elegant, nuanced writing that the people here—even when they’re flawed or unlikable—inspire sympathy and respect.”I talked recently with Dennis-Benn about motherhood, the loneliness of sentences, and queer fiction.

Both Patsy and your previous novel, Here Comes the Sun, address troubled mother-daughter relationships. What is it about the dynamic that drives your interest?

Mother-daughter relationships are complex. I’ve always been fascinated by how generational traumas and gendered expectations are passed on through these relationships. Also, as much as we deny this in our youth, as adults we realize how similar we are to the people who nurtured us. We also realize that they are human beings, not gods. While writing Patsy, I had to consider our realm in our society, where we put mothers on a pedestal, completely disregarding them as women with flaws, desires, sexuality, yearnings, and dreams of their own. Once we begin to see our parents as humans, we become more forgiving and empathetic toward them.

In Patsy, my hope was for Tru to learn this about her mother. To the reader, it’s obvious that both characters are more alike than they know. In fact, both Tru and Patsy struggle with depression and are existing in parallel realms as queer. In the beginning of the book, Patsy tells Tru to “be a good girl” in an attempt to steer Tru out of what Patsy understands as “her tomboy ways.” Similarly, in Here Comes the Sun, Delores tells Thandi, “Nobody loves a black girl, not even herself.” It goes to show that while we may feel alone in our struggle and identity, there might be someone else—perhaps the very person who brought us into the world—who might have struggled with the same things.

Patsy, and her child, Tru, have identities that aren’t accepted by their Jamaican community. As a lesbian, did you have similar struggles with the acceptance of your own identity?

I was never an out lesbian in Jamaica. Homosexuality was taboo with the majority of the country being Christian. Therefore, I felt like I was the only one who harbored those feelings. Not many Jamaicans dared to come out of the closet. If they were found out, they could be beaten and killed. At least, that was what I grew up seeing around me. I was raised to fear people like me—gays and lesbians. We didn’t even have a name for it then. People just referred to them as “funny.” If it was ever speculated that someone was “funny” in my community, people would shun the person and snatch their children, since, in their minds, homosexuality was synonymous with pedophilia. I waited until I moved to America to come out. I, like Patsy, came to America to live out loud.

In your work, there are many fantastic lean sentences that speak volumes, like, “Jesus is the only viable excuse a young woman can use to deny the penis.” What goes into a good sentence for you?

I labor over all my sentences. I would spend an entire day obsessing over a sentence, sometimes forgetting to eat. Gary Lutz was right when he wrote about the sentence being a very lonely place. I’m very particular about the words I use. The sentence you mentioned served as an epiphany as I wrote it. It never occurred to me how much resentment I carried for religion and its oppression of women and our bodies until I wrote it.

In Patsy, there’s an ongoing sense of longing. Is tone something you’re consciously creating as you’re writing?

What I’m more conscious of is voice. Patsy’s voice came to me first, and I wrote the story with that voice in mind. Tru’s voice followed. All my fictions start with a voice that leads me into the story.

What do you look for in queer fiction?

I’m currently working on my third novel. I don’t want to give away what the story is about. Like Patsy, it’s set in Jamaica and Brooklyn, New York. This story is really a challenge since I have never written anything like it before, but I like challenging myself!