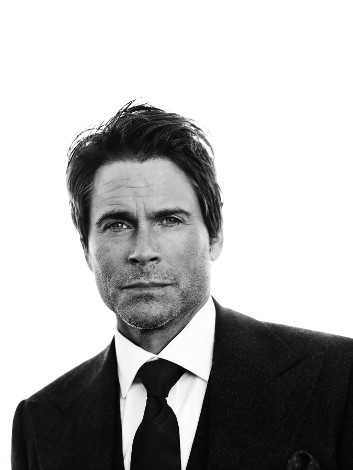 “If 11 people tell you you’re drunk, you should probably lie down,” jokes Rob Lowe—not in regard to his days of heavy partying, but about his decision to write a book. After years of entertaining guests at dinner parties with his treasure trove of material and knack for storytelling, he decided to put pen to paper—and loved it. In 2011, he published his first memoir, Stories I Only Tell My Friends, a “well-modulated actor’s memoir,” as Kirkus called it, and now he’s following up with Love Life, a memoir that also reflects on the highs and lows of the Hollywood life and how this charmed and challenging world is overshadowed by his most important role: family man.

Lowe explains that his first book was neatly contained within the narrative frame of his life, whereas Love Life evolved in a more episodic matter and forced him to do the heavy lifting of finding the arc of the story. Even though the actor is well-acquainted with overcoming the pressure of performance anxiety, Lowe worried as he stared down at the blank page of his sophomore effort, “You’re asking people to spend money, sit down, stop their lives and listen to what you have to say, so you better deliver.” But he understands that one can’t just write with an audience in mind: You have to say what you have to say. Like all practiced screenwriters, he pulled out a corkboard and 3-by-5-inch index cards and created a storyboard to shape a balanced narrative: “If you read it cover to cover, I wanted it to be a journey in total, but I also knew it was the kind of book, if you wanted to, you could skip right to the Playboy Mansion chapter and be fine,” says Lowe.

Readers who expect a memoir from a member of the “Brat Pack” to be ripe with tales of celebrity escapades will not be disappointed. Although he shies away from naming ex-girlfriends and some of the unpleasant characters who populate his anecdotes, he includes ample romps in hot tubs, a double-date at Warren Beatty’s notorious bachelor pad and a recollection of being seduced for the first time at 13. A vibrator appears on the second page. Yet all of these exploits are tamed by the turning point of Lowe’s life: rehab. In one of the most powerful moments of the book, Lowe recounts a group session from rehab when he witnesses a famous athlete transform from a stoic giant into a tender, scared boy conceding to his demons—a scene that will turn the most fierce skeptics of rehabilitation into believers, including Lowe himself. Lowe had always been a hard worker (IMDB lists 82 acting credits for him), but once he finds sobriety, a renewed work ethos begins to fuel his life, both in terms of his profession and his family.

This ambitious, deeply present and dedicated lover of life is the character whom Lowe portrays most wholeheartedly throughout the book. He meditates on the grief of losing loved ones and the all-encompassing joy of raising his sons. He writes about the extremely fraught sadness and joy of his oldest son leaving for college, which he describes as “one of the most emotional experiences of my life.” He also dedicates a chapter to his wife of 23 years, whom he praises as rescuing him from his youthful indiscretions and fear of intimacy.

Lowe counters these personal moments with a lighter and often more insightful respite into the inner workings of Hollywood. “I always wished I had mentors as a young up-and-coming actor,” he adds. “I literally was making it up as I went along.” For any aspiring actor/director/screenwriter/producer, Lowe desensationalizes the magic of moviemaking. Adhering to the old adage of “show, don’t tell,” he highlights several deflating tales from the trenches, like mucking up his lines during the preview of A Few Good Men on stage in London. For fans of Lowe’s character Chris Traeger from Parks and Recreation, he also channels his inner comedian as he mocks the ridiculous industry practice of unqualified “readers” being tasked to write coverage notes of new ideas.

Here’s how he imagines coverage would go down on a pitch to build the “Lincoln Memorial”: “Terrible title, completely unimaginative. Maybe Lincoln’s Lair? Or possibly Dome of the Great Emancipator?” And on the design: “Exhausted stair-climbers do not want to enter a huge, dimly lit room and crane their necks to look up to see the statue. The Lincoln statue should be at our audience’s eye level. Also, his hands are too large and completely unrealistic. Everyone knows Lincoln was not thirty feet tall.” He goes on to spoof coverage of Sesame Street: The title is “misleading and dangerous,” as it calls to mind “a road made of hard-to-eat-nuts.”

“All the great lessons that anybody learns in my business have been ingrained into me since I was a kid—I want to open big; I want to close big,” Lowe says. He explains that honesty, authenticity, humor and pacing are all crucial elements that he’s parlayed from working in film and television into writing his memoirs, and having seen that so much is lost and won in the editing room, he has become hyperconscious of editing as he writes. He doesn’t send anything to his editor unless he’s ready to have it out in the world (he shares an editor with John Irving—coincidentally, Lowe worked with Irving on the film version of The Hotel New Hampshire—so he’s aware of the literary deep end he’s swimming in).

“I love words—I love language,” says Lowe. “Nothing makes me happier than a beautifully constructed sentence, and that can be true in literature or an Aaron Sorkin speech on The West Wing.”

Bridgette Bates is a writer and editor who lives in Los Angeles. A recipient of a Fulbright and a Boston Review “Discovery” Prize, her book of poetry will be published this fall by Rescue Press.