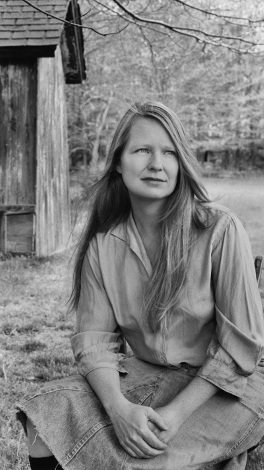 Samantha Hunt’s fiction lies in the meeting place between our common reality and the expanded reality of dreams, transformations, visitations, and conjurings. In her previous novels, teenagers communicate with the dead, a man travels through time over Queens, and men emerge from and disappear into the ocean. Hunt’s latest book, a collection of stories titled The Dark Dark, again inhabits the threshold between realities. “This is our experience in the world,” she says. “That’s what’s true to our life. Weird things happen all the time. If you have a nightmare, your day is thrown off by that nightmare. You are affected by it.”

Her husband, a journalist, once said jokingly to their daughters that his job was to tell the truth, and their mother’s was to spin fables. Reviewers often classify her work as fantasy, but Hunt’s fiction advocates for more generous thinking: fiction is a more accurate truth because it incorporates our imaginings, our psychology, the fleeting visions we see out of the corner of our eye, which can and do affect our actions as much as objective reality.

The Dark Dark contends with spontaneous human-to-deer transformations, 13 pregnant teenagers who float in the principle’s office, and a stenographer’s notebook that tells the story of those reading it. Ghosts have played key roles in her work, and she laments that our culture lacks language to talk about the dead. “Though my dad is gone,” she says, “it’s not as though I don’t interface with him every single day. Here’s this object of his, here’s what he would have thought about this. They too are part of our expanded reality.”

Many of these stories explore the site of the female body, and though she does not sit down to write about the female form, it keeps returning to her as a site of curious vulnerability. “I do have three young daughters, so I think about it a lot, what it means for them to be developing in this world under these chilling circumstances. Their bodies are simultaneously hated and not protected.”

One of the collection’s most powerful stories, “A Love Story,” examines the nighttime disturbances of a young mother. “I wrote ‘A Love Story’ in the hours it was written about. There are fears I have in the night, and I wanted to write a story about that fear without it being necessarily a scary story.” In one of Hunt’s favorite movies, Wendy and Lucy, Michelle Williams’ character is menaced by a stranger while sleeping alone in the park, and she finds she is unable to move or speak. “That is the truest experience of fear I’ve seen in a work of art,” Hunt says. “I became obsessed with that scene. I wanted to create fear that felt real rather than horror-movie fear. I wanted to think about what fear is, that fear is the opposite of love.” Outside a rural house, a stranger coughing at the door in the dark—this is the type of honest fear that populates The Dark Dark.

The space Hunt’s fiction inhabits is the dark dark itself, which, she writes, is “unknowable, unlit, mysterious, and disappearing.” “You can have one foot in a spot that’s grounded,” she says, “and one foot out there in the dark, the night, the unknown, which is so tempting, and for me is the place where mystery is sighted. I can’t not go into the unknown. Where the scary music is playing and people say, ‘Don’t go in there,’ I’m the person who says, ‘What’s in there?’ I must know.”

Lucas Loredo's work has been featured by Best American Short Stories, the Masters Review, the Rumpus, the Washington Square Review, and the Southwest Review. He is  an MFA fellow at the Michener Center for Writers in Austin.