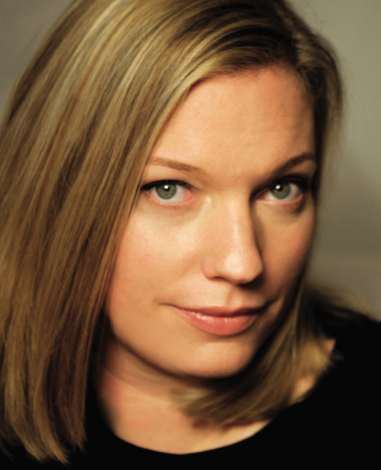 Somewhere along the line in Lucy and Owen’s marriage, the sex tapered off. The makeup, high heels, and date nights went out the window. The poop wound up on the wall. Again.

“Why is there poop on the wall again?” Sarah Dunn writes in The Arrangement, a big, bawdy comic novel (starred review) set in the fictional Hudson Valley town of Beekman, New York:

[Lucy] didn’t expect an answer. She just wanted the universe to hear her. To hear that this was her life, a life of discovering poop on the wall. Again.

“Because, really, is there any good answer to that question? Why was there poop on the wall? Because Lucy was a mommy. Because she had a five-year-old son with some challenges. Just because, really. Because, full stop.

A decade ago, Lucy and Owen were two hot, successful New York City creatives. Now, they live in the country full time, Owen is a headhunter, and Lucy is the stay-at-home parent for their five-year-old son, Wyatt, who’s autistic.

In an attempt to regain some of their former magic, they agree to an open marriage experiment with a specific set of rules: No talking about it. No falling in love. No leaving. No sexting in the house. No prostitutes. And the experiment ends after six months—no exceptions.

By the opening sentence (“After it was over, all of it, Lucy found herself making the point again and again that it had been a mutual decision.”), the Arrangement is off the rails.

“There’s a reason people go off the rails—sometimes your rails are not what you should be on,” says Dunn, who Kirkus reached by phone in L.A.“The idea of life just being one where victory is to die holding the hand of your first husband...I mean, that’s one way to live your life, but it’s not necessarily the only way.”

Dunn is a novelist (The Big Love, 2004; Secrets to Happiness, 2009) and television writer who splits her time between L.A. and Garrison, New York, on which the town of Beekman is closely based. She’s currently shooting episodes of American Housewife, the ABC series she created, while her husband, a journalist, cares for their children at home. (The Arrangement is already slated for a TV series, with a producer attached.) They are not now nor have they ever been in an open marriage.

“I had to come up with the Rules [for the Arrangement] with my real husband,” says Dunn, who capitalizes both in the book, “just because I want to know what his rules would be. We actually do have a legal pad somewhere where we wrote down rules. I have to say, he was a very good sport about it. ‘No sexting in the house’ was his idea. I wouldn’t even have thought that would be involved.”

Owen is the first to make use of the Arrangement, hooking up with a kooky boutique owner who demands an increasingly hilarious level of attention and home repairs. Meanwhile, Lucy meets a divorced city-dweller through a mutual friend that foments a sexual reawakening (“You’re like the junior year abroad of marriage,” she admiringly tells her paramour).

“It really wasn’t the sex,” Dunn writes. “Or it wasn’t just the sex. It was, well, feeling like the best version of herself, the version she used to be a long time ago. Only back when she was that version of herself, she hadn’t appreciated it. She didn’t know it was something that would go away, that would disappear so slowly and yet so quickly she wouldn’t even notice it was gone until it was too late.”

“In any intimate relationship, there is a dance between being seen and unseen,” Dunn says. “If it’s healthy, you keep communicating about that. You keep saying ‘See me,’ and the other person either does, or makes progress toward that, or they don’t—then you’ve got a real problem on your hands.”

Set against the delightful, carnivalesque backdrop of small-town gossip, politics, and drama, The Arrangement is a bit of a cautionary tale for those in LTRs IRL, and a stark reminder that visibility is key. On a personal note, Dunn hopes that parents of children with autism will read the book and feel recognized.

“If there’s a mission in this book, I would hope that some woman in a waiting room, while her three-year-old is getting occupational therapy, will read this book and be like, okay, somebody knows what I’m going through,” says Dunn. “I do find that parents who have kids with any sort of special needs—speaking of feeling seen—they feel seen in this book.”