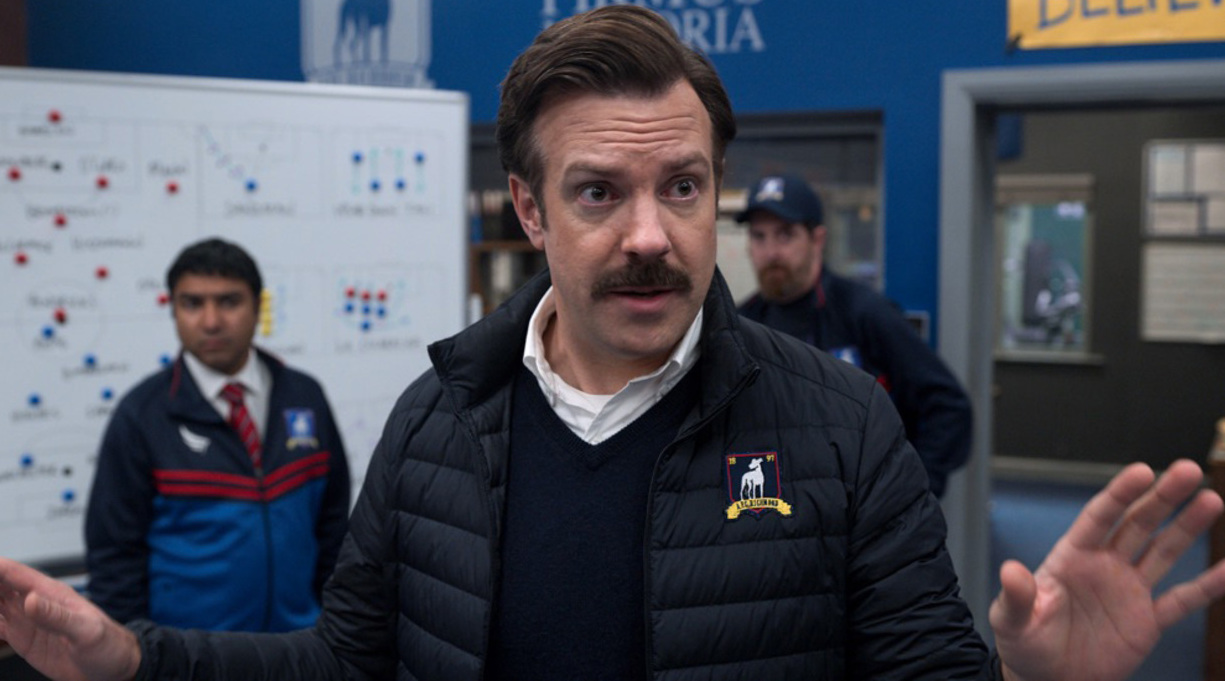 Summer 2021 has been an especially perplexing time in sports: The 2020 Tokyo Olympics never rebranded, which reinforced the feeling of being stuck in a pandemic time loop; the most famous Springsteen was Olympian Jessica, which sparked a thousand corny headlines; and the Cleveland baseball team announced its new name with the panache of a pop star dropping a surprise album, which makes Washington, D.C.’s inability to rename its football team even more baffling. Is it any wonder so many of us welcomed the return of Ted Lasso, America’s most soothing television show?

Ted Lasso is a Kansas football coach hired to helm an English Premier League soccer team, AFC Richmond, and his powerful Midwestern charm wins over the team and fans alike. Unlike popular television shows of the past 20 years that focus on antiheroes, violence, and misogyny, Ted Lasso espouses kindness and teamwork. Romance, we often say, is the genre of hope, so it’s no surprise that romancelandia has embraced a show that aligns with our core values: When Ted Lasso leaps up and taps the “BELIEVE” sign hanging above his office door, he invites us to believe, too.

On the Fated Mates podcast, co-host Sarah MacLean and I argued that player Roy Kent could have been plucked straight out of romance central casting: A man that gruff was surely destined for love. This season hews so closely to genre conventions that I wouldn’t be surprised to find Brett Goldstein secretly writing romance novels under the pen name Royalina Kent. In episode 5, Rainbow, Ted fully morphs from believer to romantic, telling his players that “everything will work out in the end.” Ted Lasso fans might enjoy contemporary sports romances, which deliver similar plotlines and a guaranteed “rom-communism” happily-ever-after.

Roy and Keely’s relationship is classic “grumpy/sunshine,” a romance trope in which a relentlessly cheerful person wins the heart of a die-hard curmudgeon. In Nalini Singh’s Rock Hard (TKA Distribution, 2015), Gabriel Bishop applies the no-holds-barred mentality he learned as a rugby star to the business world. After taking over a struggling department store, Gabriel sets his sights on shy executive assistant Charlotte Baird. Opposites attract, and Gabriel is a force of nature determined to uncover the secrets of the woman hiding behind a helpful, friendly demeanor.

When Rebecca assumes ownership of AFC Richmond, it’s a blueprint “woman in a man’s world” story. Likewise, Irresistible You by Kate Meader (Pocket Books, 2017) tells the tale of three estranged sisters who inherit a struggling NHL team after the death of their difficult, mercurial father. Harper Chase is determined to turn the team around by recruiting Remy DuPre, a veteran with known leadership qualities. Remy and Harper try to ignore their strong attraction as they attempt to turn the team around.

Prodigal son Jamie Tartt wants back on the Richmond team, and The Dating Playbook by Farrah Rochon (Forever, Aug. 17) tells the story of Jamar Dixon’s attempt to return to the NFL after a knee injury. When Jamar decides that personal trainer Taylor Powell is the only one who can get him into shape, he convinces her to pretend they are dating, hoping to keep their training sessions out of the media spotlight.

On Ted Lasso, when player Sam Obisanyalearns that the club’s fictional sponsor, Dubai Air, is harming his homeland of Nigeria, he blocks out the company’s name on his kit in an act of protest. In Role Model by Rachel Reid (Carina Press, Aug. 10), Troy Barrett is traded to a new hockey team after supporting the women who accused his former teammate and best friend of being a rapist. Even though Troy is firmly in the closet, he can’t hide his attraction to his new team’s social media manager, Harris Drover. Troy calls out sexual assault in the NHL but must also grapple with why he complied with hockey’s heteronormative and misogynistic culture in the first place.