Willie Nelson's 'Roll Me Up and Smoke Me When I Die' 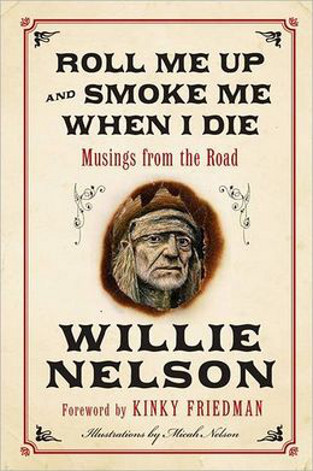 Although Kirkus’ archives don’t indisputably resolve the claim, I may be the first reporter in the long, illustrious history of this magazine to interview a writer on his very own, fancy tour bus —a tour bus that is strongly redolent of a substance that was recently legalized in Washington and Colorado. On the subject of book writing, Willie Nelson is largely taciturn, but his book, Roll Me Up and Smoke Me When I Die: Musings from the Road, fills in all the gaps he leaves open in person. The memoir is a hodgepodge of memories, country jokes, song lyrics, tributes from his family and political musings. Kirkus’ reviewer liked the book but cautioned that “how closely readers follow Nelson’s meandering path may largely depend on their own lucidity at the time."

A typical passage reads like this one: “I did an interview today with an old friend from San Antonio named Paul Venema. He’s a great guy and an old friend. I’ll see him tomorrow night in Helotes, Texas, at our show at John T. Floore Country Store. John T’s is one of the better beer joints in Texas. John T. Floore was a really good friend of mine and loaned me money one time when I really needed it. I wrote a song about him,” and Nelson quotes the song.

But to criticize Nelson for writing a book that’s a little messy feels fundamentally misguided. His misfortune, loves, observations, and songwriting talent emerge unvarnished in the book. “I seem to have been addicted to something most of my life,” he writes with his usual frankness and then goes on to detail exactly how he was addicted and what the addiction did to his talent. Roll Me Up and Smoke Me When I Die will appeal most to Nelson’s fans, but it’s an affectionate, infectious document of the happiness he clearly feels at this point in his life.

Nelson answered my questions just before he went onstage at a show in November in Austin.

What inspired you to write the book?

Well, the publisher said, “Hey, do you want to write a book and there’s X amount of dollars involved,” and I said “OK."

You’re pretty candid about your life in the book—was it difficult to write those passages?

No, it would be harder not to be candid.

You quote your lyrics quite a bit in the book—you feel like your song lyrics tell the story of your life...

Yeah, absolutely. Each one tells one story, maybe several (but at least one story), and I like the idea of throwing in a song every now and then to break up the boringness of my writing.

Did you write it all yourself, or did you have someone help you shape the narrative of it?

I wrote it all, and then after I finished, my wife, Annie, kind of put it in form for me and fixed it up. Then we got it like we wanted it and turned it over to the book company.

Now that Obama’s been re-elected, do you feel like parity and fairness for farmers is going to come?

I surely hope so. It’s way past due, and we’ve been having Farm Aids for 27 years now in a row, looking for a better deal for the small family farmers, so hopefully things will get better.

And what about the laws that were passed in Washington and Colorado legalizing marijuana?

I think it’s very positive —I think a lot of the country will head that way once they see that Colorado and Washington are going to do fairly well financially because of it and it will keep the illegal drug dealers from making all the money.

Do you feel like writing a book allows you to interact differently with your fans than writing and performing songs does?

I don’t know that it does; I just felt like writing a book. Flip a coin; it’ll be accepted or not accepted. Either way, I got to say what I wanted to say.