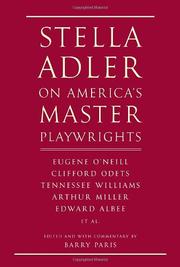 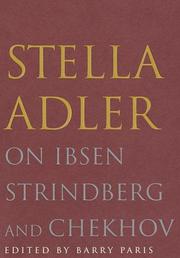 HISTORY
Released: April 4, 1999
STELLA ADLER ON IBSEN, STRINDBERG, AND CHEKHOV
edited by Barry Paris
HISTORY
Released: April 4, 1999
STELLA ADLER ON IBSEN, STRINDBERG, AND CHEKHOV
edited by Barry Paris
The late acting teacher's legendary lectures on script interpretation lose something when transposed to the printed page, though they still make a fine introduction to modern drama and the acting style it requires. Like Moscow Art Theatre director Konstantin Stanislavsky, with whom she studied, and like her fellow members of the Group Theatre, which popularized his revolutionary acting technique in America, Adler (1901—92) stresses the actor's role as servant to the playwright. Ibsen and his successors created a new kind of drama based on middle-class life and speech, she asserts; since what people say isn—t necessarily what they mean, actors in these plays must imagine and convey their characters" inner lives beneath and beyond the text—but always for the purpose of illuminating its themes. Adler's interpretations stick closely to received wisdom: Ibsen depicts the individual struggling for liberation from society's conventions; Strindberg portrays men and women in mortal conflict; Chekhov is the poet of nostalgia and loss. Nonetheless, her specific examples of how an actor can particularize these themes in an individual character's actions—e.g., Nora's habit of hiding things in A Doll's House—are fascinating. It's hard to say what exactly film biographer Paris (Garbo, 1995, etc.) did to edit Adler's talks, which, judging by internal references, date from the mid-'70s through the mid-'80s. He provides very few footnotes, and he eliminates neither her repetitions nor her actressy asides for the benefit of her audience (—I—ll tell you because I want you to love me—). More rigorous cutting would have better highlighted Alder's very serious commitment to these plays and to the art of acting. Despite these flaws, Adler is majestic and inspiring as she speaks to us from a bygone age in which the theater was the principal creative home for actors who achieved dignity from their abilities as interpretive artists, not from their celebrity status or their paychecks. Read full book review > 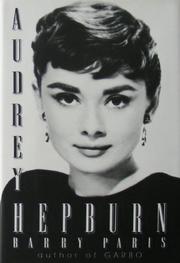 BIOGRAPHY & MEMOIR
Released: Nov. 1, 1996
AUDREY HEPBURN
by Barry Paris
BIOGRAPHY & MEMOIR
Released: Nov. 1, 1996
AUDREY HEPBURN
by Barry Paris
An extended valentine to an actress we've all fallen in love with at least once. While many actors fail to live up to their publicity, Audrey Hepburn seems, by all accounts, to have been as genuinely charming, and stylish, and wistful, and kindhearted as she appears on-screen. Of course, life wasn't always kind. There were two divorces, miscarriages, professional disappointments, and unsettled memories from her childhood in wartime Holland. But mostly, she enjoyed herself well enough, playing mother to her children and a succession of adored dogs, tending her own garden in her Swiss retreat, and doing good-will work for UNICEF. Movies were all right as far as they went, and though she made a few classics such as Funny Face and Breakfast at Tiffany's, she had no overwhelming passion for them (like Garbo, she made only 26 films). Despite winning an Oscar for Roman Holiday, she was not a particularly gifted actress, best suited, like John Wayne, to playing versions of herself. But she had presence and style, and with the able assistance of the designer Givenchy, defined fashion for almost a generation. Whether this all adds up to an interesting biography is another question. Hepburn herself once declared, ``There's never been a helluva lot to say about me.'' Veteran Hollywood biographer Paris (Garbo, 1995, etc.) does his unlevel best to prove her wrong, but he is only partly successful. He is too much the fan, too much in awe of ``Audrey.'' Paris rarely goes even as deep as an attempt to capture the evanescence of a screen persona, preferring instead the appointment-book surety of times and places and people. Still, all the facts are in the proper places, pleasantly displayed, and easily accessible, and that's more than can be said for most show-biz bios. (b&w photos, not seen) (First serial to Vanity Fair; Book-of-the-Month Club selection) Read full book review > 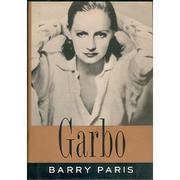 BIOGRAPHY & MEMOIR
Released: Feb. 1, 1995
GARBO: A BIOGRAPHY
by Barry Paris
BIOGRAPHY & MEMOIR
Released: Feb. 1, 1995
GARBO: A BIOGRAPHY
by Barry Paris
A thorough but often graceless narrative of a life that might better have remained shrouded in mystery. Paris (Louise Brooks, 1989) has classic material to work with. Teenage Greta Gustafson is discovered in Stockholm by director Mauritz Stiller, who tyrannizes her, changes her name, makes her a star, and accompanies her to Hollywood. Stiller's career stalls, and he dies a failure. Meanwhile Garbo becomes the familiar icon that her roles frequently mirrored: the perpetually exhausted, gloomy, misunderstood woman with the mesmerizing face. During the period of her stardom and for the 49 years that followed her inadvertent retirement in 1941, Garbo cultivated her pathological, and paradoxical, loathing of publicity and wariness of strangers. This seems to have served not only as a means of self-protection; it was also wise publicity strategy, for she comes off in the reminiscences of her friends and colleagues as paranoid, incurious, and self-absorbed. Paris tellingly repeats Cecil Beaton's observation that ``if she hadn't been `Garbo,' nobody would've wanted to be around her for ten minutes.'' Paris had access to 100 hours of recorded phone conversations between Garbo and art dealer and confidant Sam Green from the 1970s and '80s that portray Garbo as swamped in her own banality, refusing to speak of her films but always ready to complain about her wrinkles, her diet, and her disgust at being recognized in the street. Paris is particularly skillful when detailing Garbo's abortive attempts at a comeback, but the chronology of his anecdotes is sometimes scrambled, and he offers dubious psychosexual insights in his effort to defend an improbably chaste portrait of her: ``Garbo's own innocence was as real as it appeared onscreen, and it was a quality that had to do with love, not sex.'' The prose is often marred by similarly tortuous analyses. Although it leaves her motivations enigmatic, this will likely be the definitive Garbo biography; unfortunately, the story of her life is far less captivating than her screen legacy. (180 photos, not seen) Read full book review > 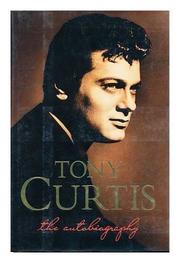 BIOGRAPHY & MEMOIR
Released: Nov. 19, 1993
TONY CURTIS: THE AUTOBIOGRAPHY
by Tony Curtis, Barry Paris
BIOGRAPHY & MEMOIR
Released: Nov. 19, 1993
TONY CURTIS: THE AUTOBIOGRAPHY
by Tony Curtis, Barry Paris
Lippy memoir of actor/painter/novelist Bernard Schwartz, a hard-luck kid from gang-ridden New York who went to Hollywood in his early 20s and became known as Tony Curtis; told with Paris (Louise Brooks, 1989) inserting interviews with Curtis's friends, co-workers, and family members into the otherwise all-Curtis text. As ever, Curtis thinks well of himself, having checked both a skid in his career and addictions to cocaine and alcohol requiring two trips to the Betty Ford Clinic. Curtis's first trip to BFC didn't take, but family intervention in his yearlong slip planted him right back in the clinic for a second drying out and ego- retooling. Even so, the newer, brighter Curtis cuffs his former directors—Howard Koch, Blake Edwards, Norman Jewison, and Robert Mulligan—for not ``making any effort or gesture toward me. It may sound like sour grapes, but I don't care what it sound like. That's my feeling.'' Meanwhile, he praises Arnold Schwarzenegger for hiring him for the Terminator's directing debut in 1992's lame TV comedy Christmas in Connecticut. Despite what many will think lapses, Curtis's buoyant self-love (Elvis allegedly copied his hair style), active sex life (modestly veiled), and rise from dashing hunk (The Black Shield of Falworth) to determined, ever-committed actor (The Boston Strangler) make for an attractive, highly readable life, filled with gods as friends (Cary Grant, Orson Welles, Frank Sinatra) and goddesses as fellow workers (Marilyn Monroe, Natalie Wood, Gina Lollobrigida) and wives (Janet Leigh, Christine Kaufmann). Aside from the addiction passages, the highlight here is the filming of Some Like It Hot, the cornerstone of Curtis's huge growth as a talent. Sometimes mean-spirited but...nobody's perfect. Could do very well. (Thirty-five b&w photos—not seen) Read full book review >