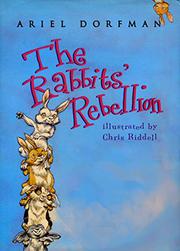 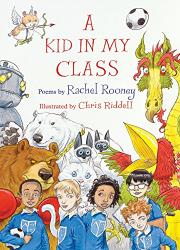 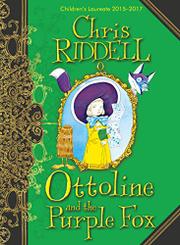 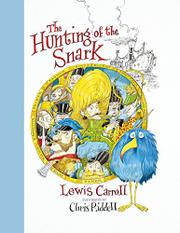 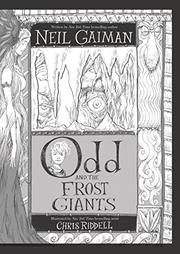 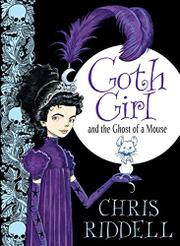 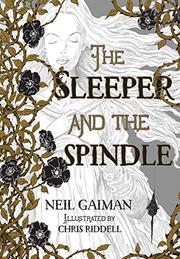 THE SLEEPER AND THE SPINDLE
by Neil Gaiman, illustrated by Chris Riddell
CHILDREN'S
Released: Sept. 22, 2015

THE SLEEPER AND THE SPINDLE
by Neil Gaiman, illustrated by Chris Riddell
"If this book isn't quite a masterpiece, it's certainly a treasure, and that's more than enough. (Fairy tale. 11-18)"
Is it fair to expect a masterpiece when Gaiman and Riddell work together? Probably. Read full book review > 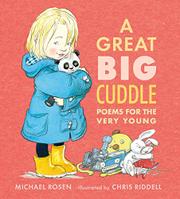 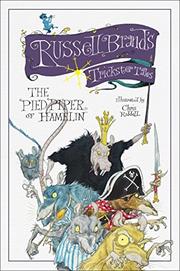 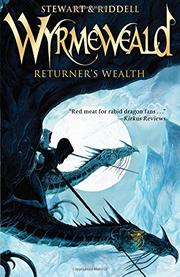 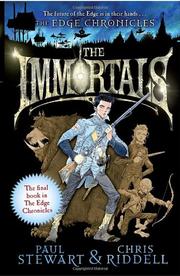 ADVENTURE
Released: Sept. 14, 2010
THE IMMORTALS
by Paul Stewart, illustrated by Chris Riddell
ADVENTURE
Released: Sept. 14, 2010
THE IMMORTALS
by Paul Stewart, illustrated by Chris Riddell
Stewart and Riddell cap their Edge Chronicles with a large-scale grand tour and cast reunion. Several generations after the events in Freeglader (2004), young orphan Nate Quarter is forced to flee for his life from a murderous mine supervisor—which becomes more or less a theme as, acquiring such doughty companions as the mine owner's intrepid daughter Eudoxia and Librarian Knight Zelphyius Dax along the way, he comes and goes from Great Glade and several other cities or settlements that have grown up in the vast Deep Woods that border the overhanging Edge of the world. The long journey takes him through multiple battles, chases, rescues and political upheavals to mystical encounters with figures from the past in the ever-dark Night Woods and then on to a climax in the restored airborne city of Sanctaphrax. A huge cast teeming with multiple races of uneasily coexistent goblins, trolls and more, plus Dementor-ish gloamglozers and other deadly predators are all depicted in lovingly minute (and occasionally gruesome) detail in Riddell's many pen-and-ink portraits and add plenty of color to this vigorous sendoff. (Fantasy. 11-13)Read full book review > 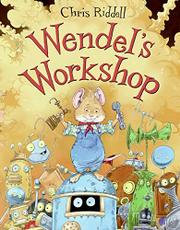 CHILDREN'S
Released: Feb. 1, 2010
WENDEL’S WORKSHOP
by Chris Riddell, illustrated by Chris Riddell
CHILDREN'S
Released: Feb. 1, 2010
WENDEL’S WORKSHOP
by Chris Riddell, illustrated by Chris Riddell
Young Wendel is a mouse and an inventor. Like many an inventor before him, he creates a robotic creature to save him from cleaning up after himself. Wendel is an unintentionally thoughtless slob: a slob because he throws his failures on a metastasizing junk pile, thoughtless because one of those failures is a sweet, well-meaning if inept, lantern-jawed automaton—Clunk by name—that, rather alarmingly, is dumped in the rubbish chute. When Clunk's replacement, Wendelbot, a blockheaded anal-retentive, runs predictably amok, giving Wendel a taste of the rubbish chute, it is Clunk and an appealingly ragtag gang of ready-mades fashioned from the scrapheap by Wendel that convince Wendelbot to self-destruct. Riddell nimbly plays on readers' sympathies for emotionally vulnerable, snaggletooth robots, but that is about it as far as the story line goes, which fails to display any of the inventiveness Wendel would expect—no fun twist, nothing clever or resourceful built from scant means. The artwork, however, doesn't disappoint, with its busy, sure-handed line and snappy coloring. A pretty face, undeniably, but void of hidden depths. (Picture book. 4-8)Read full book review > 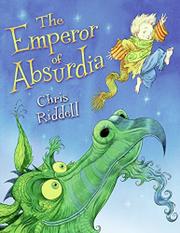 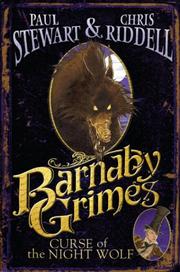 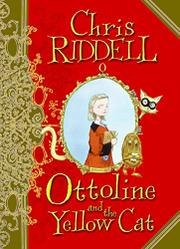 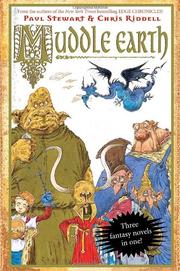 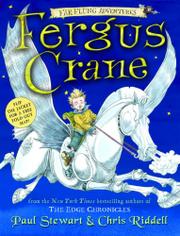 ADVENTURE
Released: May 23, 2006
FERGUS CRANE: FAR-FLUNG ADVENTURES
by Paul Stewart, illustrated by Chris Riddell
ADVENTURE
Released: May 23, 2006
FERGUS CRANE: FAR-FLUNG ADVENTURES
by Paul Stewart, illustrated by Chris Riddell
The creators of the Edge Chronicles open a new series aimed at a younger audience with this tale of a lad who discovers that his teachers are all pirates. Supplemented with many hand-drawn letters, clippings and scenes drawn in great detail with almost invisibly fine inked lines, the story takes a wandering course as a mechanical flying horse takes Fergus to the mysterious Fateful Voyage Trading Company. There he meets three talking penguins and an inventor uncle he didn't know he had, learns that his father had been lost while searching for fabulously valuable fire diamonds and then travels to a remote archipelago to rescue his classmates, who had been kidnapped by his father's treacherous crew to gather the diamonds from volcanic caverns. Despite the elaborate black-and-white art and frequent artificial efforts to pump up the suspense, readers aren't likely to stay the course; Stewart spends too much time introducing a large cast of characters who mostly just pass in review, and the melodramatic bits don't arrive until very late. Missable. (Fantasy. 10-12)Read full book review > 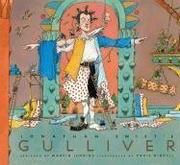 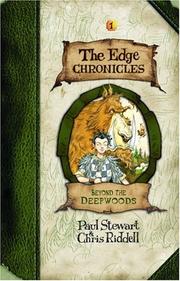 CHILDREN'S
Released: June 22, 2004
BEYOND THE DEEPWOODS: THE EDGE CHRONICLES, #1
by Paul Stewart, Chris Riddell
CHILDREN'S
Released: June 22, 2004
BEYOND THE DEEPWOODS: THE EDGE CHRONICLES, #1
by Paul Stewart, Chris Riddell
Readers fond of nonstop adventures thickly stocked with variously clawed, tentacled, tusked, venomous, tattooed, insidious, blood-drinking, slime-vomiting plug-uglies will be in hog heaven over this imported series opener, trendily bound in a jacketless pictorial cover. Young Twig has grown up as the foundling child of a peaceable, none-too-bright pair of wood trolls. But he enters a different destiny when he strays off a marked path into the trackless Deepwoods, where challenges as diverse as the aptly named Halitoad, tribble/piranha hybrids dubbed Wigwigs, toothy Bloodoaks, and, most horrible of all, a cooing, preteen, makeover-happy Termagant Trog await. All will be escaped by the skin of his teeth and, as he's not particularly strong, brave, or clever, with the help of mysterious strangers. Rendered in realistic, gloriously obsessive detail in dozens of drawings, the monsters seem to leap (or ooze) to life-sometimes so vividly that Twig seems to fade into the background. By the end, though, he's eluded them all, reunited with his real father aboard a flying pirate ship, and is sailing off into the simultaneously published sequel, Stormchaser (ISBN: 0-385-75070-6), with more sequels to come. Good fun, though the supporting cast tends to overshadow the plot. (Fiction. 10-12)Read full book review > 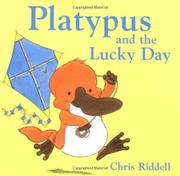 ADVENTURE
Released: Aug. 1, 2002
PLATYPUS AND THE LUCKY DAY
by Chris Riddell, illustrated by Chris Riddell
ADVENTURE
Released: Aug. 1, 2002
PLATYPUS AND THE LUCKY DAY
by Chris Riddell, illustrated by Chris Riddell
A lucky day proves to be just so, but not before a series of mishaps casts a long shadow across Platypus's expectations. Upon waking, he declares, "Today is my lucky day." Why he feels so is not clear, but it's not a bad attitude to strike in the early morning, taking the optimistic high road. Then he runs into a little trouble with his kite: the string is all tangled; it snaps in the wind and sticks in a tree; the branch Platypus is crawling on breaks and sends him punishingly earthward. He tries painting—enough of that kite—but the wind plays havoc with the paper and then the rain douses him good. Platypus makes a beeline for his bed—enough of the world, forsooth—there to find a banana and a missing, beloved stuffed toy under the covers. Things are looking better. He opens a closet to find an old go-cart, which he takes outside, modestly crashes into a tree, whereupon the kite tumbles from the branches and the day can start anew. As in his introductory story about this winsome character (Platypus, p. 577), Riddell places his watercolor and black ink spots on wide expanses of white, creating focal points that carry the tale. Comical in its own low-key way, what succeeds here is the note of cheery hope—even that dive into the bed looks like it had to be fun. Keep on smiling. (Picture book. 2-4)Read full book review > 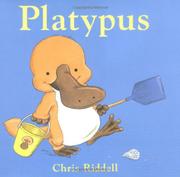 ANIMALS
Released: May 1, 2001
PLATYPUS
by Chris Riddell, illustrated by Chris Riddell
ANIMALS
Released: May 1, 2001
PLATYPUS
by Chris Riddell, illustrated by Chris Riddell
Riddell (Rabbit's Wish, 2001, etc.) reaches out to the preschool set in this charming environmental primer. The journey begins when Platypus, an avid collector, sets out to the seashore to find something special. When a "large curly shell" turns up in his bucket, Platypus thinks he's hit the jackpot. He goes home and puts the shell in his special box. Riddell's crisp watercolor illustration, finely accented in black ink, stands out against the stark white page as Platypus falls asleep under a blue-and-white striped blanket; behind him, two little eyes and a claw push the lid off the bright green box. When Platypus wakes up, his shell is gone. " ‘Oh dear . . . I will have to find a new shell for my collection,' " says Platypus. But when the second shell goes missing, Platypus is perplexed. Riddell pictures the big-billed hero soaking his feet in "his favorite thinking place." On the next page, Platypus looks aghast when a hermit crab latches on to his toe. " ‘Oh,' said Platypus to the little crab. ‘I'm sorry. If I had known the curly shell was your home, I never would have collected it.' " Final illustrations show Platypus returning the hermit crab to the beach, then checking another shell for signs of life before taking it home. Well-known as a political cartoonist, Riddell conveys his message subtly and with good humor. (Picture book. 2-5)Read full book review >

CHILDREN'S
Released: Aug. 1, 1997
KASPER IN THE GLITTER
by Philip Ridley, illustrated by Chris Riddell
CHILDREN'S
Released: Aug. 1, 1997
KASPER IN THE GLITTER
by Philip Ridley, illustrated by Chris Riddell
Enticing young people to leave the brightly lit Glitter and join him in the decrepit part of town known as The Gloom, a parent-hating, teenage bully sets himself up as King Streetwise in this plodding British farce from Ridley (Krindlekrax, 1992, etc.). Kasper Whiskey, having spent all of his ten years with his indolent mother, Pumpkin, in her beauty parlor surrounded by leveled buildings, has never met anyone his age until the day he catches Heartthrob Mink, one of King Streetwise's troops, stealing roses. When Pumpkin's prized brooch disappears, Kasper sets out in pursuit. Streetwise is looking for Heartthrob, too, for helping his intended queen, Hushabye Brightwing, escape; Kasper joins the hunt but is so offended by the king's tactics that he switches sides and brings the two fugitives to the beauty parlor. Ultimately, Pumpkin turns over a new leaf, Heartthrob deals the king a black eye, the brooch turns up, and Hushabye declares her love for Kasper. Cautionary messages about bad friends and the dangers of running away are woven into a story that, for all its quirky elements and exaggerated characters, never hits the funny bone; few readers will notice that the king sounds like Elvis, nor will they attach much hilarity to repeated glimpses of Kasper's skill at whipping up a kind of banana cream pie. Riddell's black-and-white drawings have an expressive, graphic-novel-style sophistication, but can't leaven this leaden effort. (Fiction. 11-13) Read full book review >