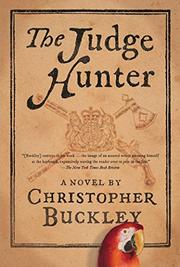 THE JUDGE HUNTER
by Christopher Buckley
FICTION & LITERATURE
Released: May 1, 2018

THE JUDGE HUNTER
by Christopher Buckley
"An entertaining and nicely crafted picaresque thriller with crackling dialogue and a brace of Colonial cops as appealingly mismatched as any of Hollywood's buddy efforts."
The political humorist's second historical novel is a witty bromance about international intrigue and a hunt for two regicides in 17th-century New England. Read full book review > 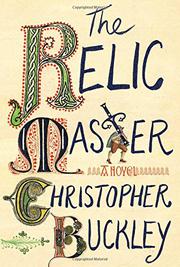 THE RELIC MASTER
by Christopher Buckley
"With torture and swordplay, there's more (lowercase) gore than Washington generally offers and more fun than most readers might expect even from twisted history."
A writer known for his satires of Washington, D.C., takes aim at religion in 16th-century Europe, where a relics trader is forced to steal one of Catholicism's most coveted objects. Read full book review > 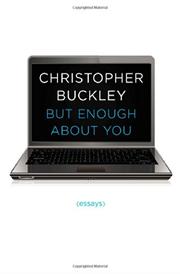 ESSAYS & ANTHOLOGIES
Released: May 6, 2014
Reviewed: March 11, 2014
BUT ENOUGH ABOUT YOU: ESSAYS
by Christopher Buckley
ESSAYS & ANTHOLOGIES
Released: May 6, 2014
BUT ENOUGH ABOUT YOU: ESSAYS
by Christopher Buckley
"Prone to benign mischief, a literary twinkle in the eye, Buckley nails his targets more often than not yet likewise has fun with unexpected asides, like the 'excruciatingly chaste' plays of the otherwise notorious Marquis de Sade."
Buckley (They Eat Puppies, Don't They?, 2012, etc.) offers stylishness and nimble wordplay in this latest collection of (generally) lightweight ruminations on contemporary culture and its foibles. Read full book review > 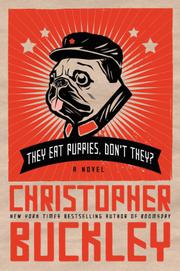 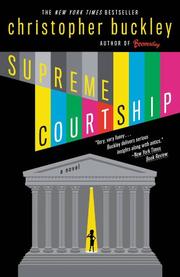 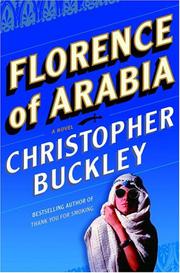 FLORENCE OF ARABIA
by Christopher Buckley
"Buckley is a literary WMD. Thank heavens he's ours."
Buckley (Washington Schlepped Here, 2003; No Way to Treat a First Lady, 2002, etc.) jauntily flips pies at Middle Eastern dynasties, splattering meringue on the CIA, the State Department, the French, the mullahs, and anyone else standing nearby. Who could not laugh? Read full book review > 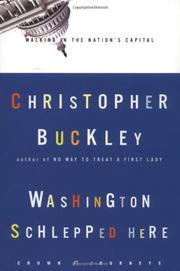 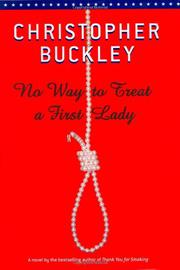 NO WAY TO TREAT A FIRST LADY
by Christopher Buckley
"Unspeakably and endlessly funny. Unless you're a former president."
Wicked humorist Buckley shoots fish in a barrel and makes them dance. Read full book review > 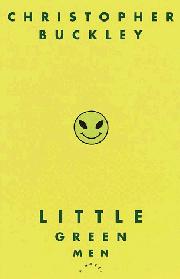 FICTION & LITERATURE
Released: April 1, 1999
LITTLE GREEN MEN
by Christopher Buckley
FICTION & LITERATURE
Released: April 1, 1999
LITTLE GREEN MEN
by Christopher Buckley
Buckley fils's fourth comic novel (following the riotous Thank You for Smoking, 1994) once again eviscerates contemporary economic-political phenomena, this time in the twin forms of a complacent TV talk-show host and of a secretive government agency that fakes alien abductions to encourage popular support for funding space exploration and Pentagon overkill. When Washington notable John Oliver Banion is kidnaped by the eponymous nonearthlings (who are in fact cheesily garbed operatives of "MJ-12"), he believes, and spreads the gospel of extraterrestrial visitation among his devoted viewers, with imaginative and timely mock-catastrophic consequences. Buckley's eye for paramilitary and media-driven nonsense remains keen, and the book hums with hilarious one-liners. But neither the embattled Banion nor any of its lesser personalities remotely resembles a developed character. The dizzily mixed result isn't much of a novel, though it's a highly amusing and likable entertainment. (Book-of-the- Month/QPB selections) Read full book review > 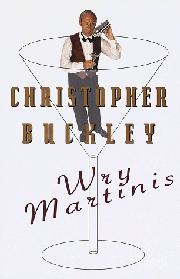 BIOGRAPHY & MEMOIR
Released: March 1, 1997
WRY MARTINIS
by Christopher Buckley
BIOGRAPHY & MEMOIR
Released: March 1, 1997
WRY MARTINIS
by Christopher Buckley
Despite a few sparks of wit, this lightly humorous collection of occasional pieces misfires badly. Unlike many of his colleagues on the right, Buckley (Thank You for Smoking, 1994, etc.) does have a strong commitment to recycling. Witness this book, which seemingly contains almost every minor piece he's written in the last ten years, every sketch or scribble, no matter how irrelevant or outdated. At least half of these pieces (which first appeared in the New Yorker, Vogue, Forbes FYI, and elsewhere) are past their expiration date, viz. pallid humoresques on the Bush-Clinton debates, Prince Charles and Lady Di, Haiti, Pat Robertson, Richard Darman, et al. Worse, Buckley's humor rarely rises above amiable cocktail-party banter. Even in his more ``timeless'' pieces, such as those on the problems with programming VCRs, the burdens of unwanted houseguests, and swampy Washington D.C. summers, his prose usually overruns his ideas. Like the Metaphysical poets, his style is to yoke two unlike subjects together and hope something will happen. So we have letters from O.J. Simpson's lawyers to the Unabomber soliciting his case and Oprah interviewing the pope on his latest book. When he is not shilling tirelessly for laughs, Buckley is a perfectly competent reporter as well as a graceful stylist (he used to write speeches for President Bush). But do we really need to read his interview with Ann Landers or his eulogy for his former boss, Malcolm Forbes, or his regrets about not serving in Vietnam? These journalistic efforts aren't substantial enough to require republication. These wry martinis make a good case for teetotaling. (Book-of- the-Month Club/Quality Paperback Book Club selection; author tour) Read full book review > 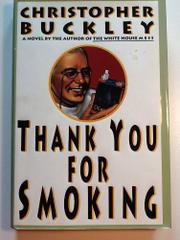 FICTION & LITERATURE
Released: June 1, 1994
THANK YOU FOR SMOKING
by Christopher Buckley
FICTION & LITERATURE
Released: June 1, 1994
THANK YOU FOR SMOKING
by Christopher Buckley
A breezy satire of political correctness, Buckley's third novel (after Wet Work, 1991) displays an undiminished appetite for current affairs and a talent for converting some of America's thornier social issues into light comedy. Less a novel than a series of glib one-acts, Thank You for Smoking chronicles the stress-filled days of Nick Naylor, chief propagandist for the tobacco industry and personally despised by cancer victims, the medical profession, talk show audiences, and most of Capitol Hill. Naylor's two best friends are equally maligned scapegoats, spokespeople for the alcohol and firearms industries respectively, and this lethal trinity's weekly lunches are the vehicle for Buckley's playful assault on American moral hypocrisy. Naylor and his pals are more or less ordinary folks who worry about losing their jobs, paying the mortgage, and raising their kids. Naylor's problem is that he is good at what he does; a matchless adversary on talk show debates, he deflates opponents with charisma and finesse. When he is kidnapped by mysterious militants who cover him with nicotine patches in the name of clean lungs, he becomes an instant hero, hounded by the press and pampered by Hollywood. As his fame and salary increase, he hobnobs with Oprah Winfrey, Larry King, Today show stars, and thinly disguised caricatures of familiar movie brokers and politicians. Meanwhile, the FBI seems to think the abduction was a deliberate publicity stunt and has evidence to prove it. Naylor goes to jail, a willing fall guy for a society obsessed with money and power. Topical allusions and a quick pace guarantee an amusing read, but Buckley's stereotyped characters, impassive prose, and pat ending limit his satirical reach to entertaining but inconsequential jabs. (Author tour) Read full book review >

Released: Feb. 12, 1990
WET WORK
by
Released: Feb. 12, 1990
WET WORK
by
Buckley's second novel (after The White House Mess, 1986) finds him edging into WFBjr's territory of international melodrama, and adding a bloody overlay of Richard Condon burlesque. The mayhem starts quickly. Zillionaire conglomerate tycoon Charley Becker, whose bottomless funds have the magic powers of Aladdin's lamp, has lost most of his family to alcoholism. When his overly protected granddaughter, a budding actress allergic to drugs, dies of a more or less forced overdose of cocaine in an East Village apartment, Charley vows revenge on the whole coke industry. In CIA lingo "wet work" means assassination, or hands-on murder, and Charley thinks death much too small a price for dealers and cartel operators to pay after robbing him of his last blood relative. And here comes the Condon, as Charley and his three main hit-men—laughably named McNamara, Bundy, and Rostow—start blowing away Manhattan drug-folk, then Miami dealers, and finally start working their way up the Amazon in search of the great factories turning out their killer tonnages. Each death they accomplish has its riotous aspect: a Catholic Puerto Rican dealer's head is blown off in front of church (although Charley has allowed him to phone in a long final confession to a surprised priest); a big Miami operator has his squid poisoned, then is threatened with an infusion of HIV positive blood, and so on. Charley's hit-men, who deal death with professional casualness while addicted to reading House & Garden and Architectural Digest, are variations on the Jack Nicholson/Charlie Partanna loveable-killer mold. Much hearty bodily injury gives big laughs for fans of black comedy. Others may find an action-packed vacuum. Read full book review >