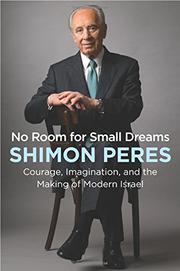 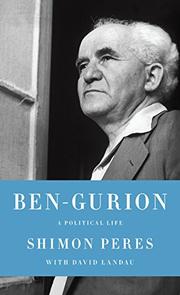 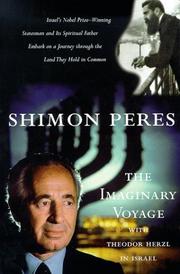 HISTORY
Released: June 1, 1999
THE IMAGINARY VOYAGE: WITH THEODOR HERZL IN ISRAEL
by Shimon Peres
HISTORY
Released: June 1, 1999
THE IMAGINARY VOYAGE: WITH THEODOR HERZL IN ISRAEL
by Shimon Peres
Israel's quirkiest visionaries, present (Shimon Peres) and past (Theodor Herzl), tour the country in a book that might possibly be appropriate for children, but not for grown-ups. Before scoring any philosophical, political, or cultural points about the State of Israel, former prime and foreign minister Peres spends tens of pages acting as travel writer and historian. His ghostwriters, thanked later, don't do badly, but the spectral premise of meeting and traveling with the 19th-century founder of political Zionism is often forced and unfruitful. After traveling by ship and train, meeting other undead like Trotsky, Marx, and Heine, the two legends take to the air, and visit the late David Ben-Gurion (the founder who made Peres's career), who reiterates his prophecy of making the desert bloom. Flying over the Dimona nuclear reactor (part of Peres's legacy), the statesman explains how the giant nuclear shadow he cast over the region will bring peace. Awkwardly, as their helicopter next passes Herzl's tomb, "tears streamed down Herzl's cheeks." The fractured fable ends with an additional message on the comparable greatness of Peres's hero, his mentor, and his own policies: "their vision is peace." A secular, Zionist version of the Thriller video, but Michael Jackson's original is catchier and less moribund. Read full book review > 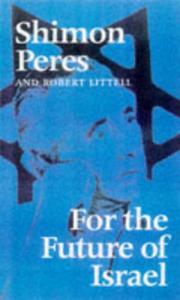 BIOGRAPHY & MEMOIR
Released: May 1, 1998
FOR THE FUTURE OF ISRAEL
by Shimon Peres, Robert Littell
BIOGRAPHY & MEMOIR
Released: May 1, 1998
FOR THE FUTURE OF ISRAEL
by Shimon Peres, Robert Littell
Five long, only fitfully fruitful conversations between Israel's former prime minister who was the long-time rival to, ultimate collaborator with, and successor to the slain Yitzhak Rabin, and a Paris-based former Newsweek correspondent and novelist. Peres reveals a number of fascinating facts of which all but a handful of readers will have been unaware. For example, during Israel's War of Independence, the Israeli forces executed one of its members allegedly spying for the British, only to learn later that he was innocent. Like Henry Kissinger, Peres has his share of bon mots, such as saying of Yasir Arafat that —when it comes to facts, he prefers to be a sort of Chagall—things can float around.— At times, Peres's reflections are highly insightful, even profound, such as this on the Jews: —We—re a dissatisfied people, a people that makes demands on itself, a people that the only electricity it knows is high-tension—there is no low tension in Jewish energy.— Unfortunately, he also is sometimes prone, as his critics claim, to viewing both the past and present through rose-colored lenses; for example, he makes the dubious assertion that —when we left power [May 1996], the trust [between Israel and its partners in the peace process] was full. I think even today we enjoy a great deal of trust among the Arabs. Among the Palestinians." His impressions of world political leaders he has met are both replete with colorful anecdotes and often superficial. Peres and Littell's book also could have used better organization—their conversations sometimes seem rambling, flitting from topic to topic. Peres, of course, is still too close to his own very eventful life to provide real autobiographical perspective with critical depth. This book, entertaining and occasionally instructive as it is, underscores the need for a good biography of one of Israel's most important leaders. Read full book review > 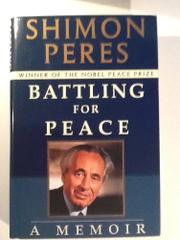 BIOGRAPHY & MEMOIR
Released: May 1, 1995
BATTLING FOR PEACE: A MEMOIR
by Shimon Peres
BIOGRAPHY & MEMOIR
Released: May 1, 1995
BATTLING FOR PEACE: A MEMOIR
by Shimon Peres
An inviting exercise in autobiography by Israel's defensive foreign minister. Even before the current peace process and peace prize, Shimon Peres was known for his paradoxical traits: an optimistic dove in Arab relations who nonetheless founded Israel's ``Doomsday'' atomic program. Readers who look for clues into Peres's complex psyche here will not be disappointed. An early influential headmaster of his ``believed that Zionism should and must offer far-reaching concessions to the Arabs,'' and his mentor, Israel's first prime minister, David Ben-Gurion, unlike Golda Meir and others, fought hard to accept the partition plan that offered Israel a fraction of its present size. Peres was used to accommodation, as he made room for Shulamit Aloni (currently his troublesome coalition partner) in his honeymoon tent after wooing his wife with readings from Das Kapital. By age 26, Peres was already a key defense operative, but he lost many political friends by sticking with Ben-Gurion's revolt from the Labor party. Long before he would stun his nation and the world with his secret diplomatic coup in Oslo, Peres was unnerving his superiors with under-the-table deals for weaponry, the most significant being the atomic reactor project arranged with France. Peres enjoys far better relations with Israel-basher Bruno Kreisky and Israeli-killer Yassir Arafat than he does with Israel's current leader, Yitzhak Rabin. Peres swears he ``never felt any animosity'' from Rabin, yet he often responds to charges in the prime minister's ``tendentious autobiography.'' Young Shimon Persky took the name Peres because one naturalist rendered this biblical Hebrew term to mean eagle. As luck would have it, everyone else considers this bird to be a vulture. Fluid, factual, and occasionally anecdotal, this is a better- than-average campaign bio by yet another feuding Israeli hero of war and peace. Read full book review >