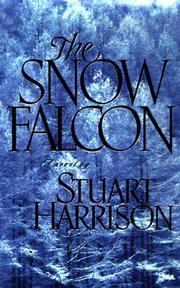 FICTION & LITERATURE
Released: Feb. 22, 1999
THE SNOW FALCON
by Stuart Harrison
FICTION & LITERATURE
Released: Feb. 22, 1999
THE SNOW FALCON
by Stuart Harrison
Broken people with troubled pasts but good hearts, along with a crippled animal rescued from a cruel hunter, bring about romance, emotional health, and happy endings for all (including the bird)—in a long, limp, unimaginative first novel set in the Canadian Northwest. Harrison's story never gets too far ahead of the reader, and its characters remain fairly predictable from the start (all the women are attractive, good, and wise; all the men—except for a few bird lovers—drink and do harm). Michael stumbles home to Little River Bend from the wreckage of a broken marriage and a recently completed prison term. Soon after, he comes upon the fallen form of a rare gyr falcon, just wounded by drunken rascal Ellis, who is eager to get his hands on the $2,000 a taxidermist has promised him. Shunned by the townsfolk, Michael nurses the falcon back to health as Jamie, a mute neighbor boy traumatized by the death of his father, looks on. Jamie's mother, Susan, is intrigued by the mysterious newcomer with the cloudy past, whose communion with both boy and bird seems magical. Eventually, Susan and Michael begin an affair, this in spite of complications brought about by Coop, the town cop, who loves Susan, and by Rachel, drunken rascal Ellis's frustrated wife. Michael, natch, must release the bird to the wild and make peace with his death father; and Rachel must let go of her past in order to realize her love for Ellis. Predictably, Jamie, at a crucial moment, ceases being a mute, and the trio heads out of Little River Bend, their inner children calmed and their futures bright. A therapeutic formula well known to perusers of The Horse Whisperer, offering few variants on that well-worn storyline. The prose isn—t especially objectionable, but Harrison's promise is dimmed by such an uninventive debut—though probably not his sales potential. Read full book review >