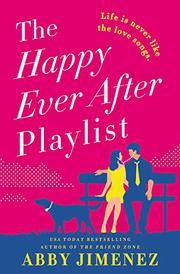 THE HAPPY EVER AFTER PLAYLIST

Two years after the tragic death of her fiance, an artist begins to heal thanks to a rock star and his dog.

Sloan Monroe is on her way to the grave of her late fiance, who was killed by a drunk driver, when she nearly hits a dog who dashed into the road. When she stops to check on him, he jumps into her car through the sunroof, and when she doesn't hear from his owner after calling the number on his collar, she decides to keep him. Jason Larsen, the dog's owner, is backpacking off the grid in Australia, and when he finally gets Sloan's voicemails nearly two weeks later, he calls her and is astonished to discover that she's had Tucker, his dog, for so long; his quasi-girlfriend was supposed to be watching Tucker but it turns out she had basically abandoned him. Since he’s still in Australia for a few weeks, Jason arranges for Sloan to keep Tucker, and through it all they text and talk and plant the seeds for a friendship, if not more. Sloan is slow and wary, even before she discovers that Jason is a musician on the cusp of star status. Still, she’s charmed by his patience and talent, and when he returns to LA, she quickly falls in love with him, his dog, and his family. Just as they’re admitting to deep feelings, he’s embarking on a long musical tour and wants her with him. It’s a grind, which she isn’t expecting, and the relationship is at odds with his label’s publicity plans, which are complicated. Plus, it keeps Sloan from pursuing her art, which she wants to explore again. Following her exceptional debut (The Friend Zone, 2019), author Jimenez has written Sloan’s story with elegant, compassionate success, showcasing a romance that navigates deep grief and healing while exploring the unexpected stressors placed on a celebrity relationship. Fans of The Friend Zone will be happy to see Kristen and Josh as Sloan’s main support system and will be touched by Jimenez’s note in the acknowledgements about her inspiration for the book.

A perfect blend of smart, heart-wrenching, and fun.

LIFE AND OTHER INCONVENIENCES
by Kristan Higgins
Fiction

THE UNHONEYMOONERS
by Christina Lauren
Fiction