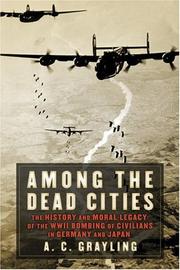 AMONG THE DEAD CITIES

The History and Moral Legacy of the WWII Bombing of Civilians in Germany and Japan
by A.C. Grayling
BUY NOW FROM
AMAZON
BARNES & NOBLE
GET WEEKLY BOOK RECOMMENDATIONS:

A philosopher seeks to determine whether Allied area-bombing during World War II was a moral wrong.

Lost amid the incomprehensible evil of the Holocaust, says Grayling (The Mystery of Things, 2005, etc.), is a lesser, though still unforgivable, WWII transgression: the Allied forces’ indiscriminate bombing of densely populated urban areas with little military significance, such as Dresden, Hiroshima and Nagasaki. Examining the physical and psychological effects of the bombings and public perception at the time, analyzing the stated and off-the-record intentions of the politicians and RAF and USAAF officers who ordered the attacks and comparing them to similar events (including 9/11), the author attempts to ascertain whether the bombings constitute a “moral crime” and what should be done if they do. He demonstrates the ineffectiveness and heavy cost of area-bombing in terms of money, matériel and Allied lives lost, not to mention the deaths of German and Japanese civilians and the destruction of untold cultural landmarks and treasures. In contrast, he points to the efficacy of precision bombing, particularly in the USAAF attacks on German oil refineries toward the end of the war. Philosophical and logical arguments here prove somewhat less effective, veering away from quantifiable data and into abstraction. Unsurprisingly, Grayling concludes that the attacks were indeed breaches of morality and that the United States and Great Britain must confess to these crimes, in part to further distance themselves from the atrocities committed by the Nazis. Moral philosophers and conscientious citizens will undoubtedly be convinced of these two nations’ guilt, but military leaders and politicians seem less likely to take their cues from a philosopher, even one who goes to great lengths to quantify his more nebulous arguments.

Well-argued and persuasive, but not likely to sway the red states.

THE HISTORY OF PHILOSOPHY
by A.C. Grayling
Nonfiction

DEMOCRACY AND ITS CRISIS
by A.C. Grayling
Nonfiction

THE AGE OF GENIUS
by A.C. Grayling
Nonfiction

THE CHALLENGE OF THINGS
by A.C. Grayling
Nonfiction

THE GOD ARGUMENT
by A.C. Grayling

RETURN OF THE DAMBUSTERS
by John Nichol
Nonfiction

THE HANDS OF WAR
by Marione Ingram
Newsletter sign-up