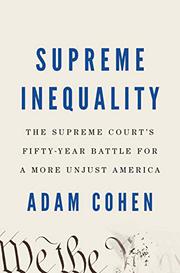 Equality is supposedly enshrined in the law of the land, but inequality reigns supreme thanks to a battery of rulings by the Supreme Court.

From the time of the New Deal until the end of the Warren Burger era, the Supreme Court was an instrument of social policy for the benefit of the poor, shattering such things as the “anti-Okie laws” that made it a crime to transport a poor person across the borders of some 28 states and made it a highly desired career track to be a “poverty lawyer.” This track was followed by none other than Ruth Bader Ginsberg, who made her first Supreme Court argument against an Air Force policy that awarded higher benefits to male than female officers. However, writes Cohen (Imbeciles: The Supreme Court, American Eugenics, and the Sterilization of Carrie Buck, 2016, etc.), the Nixon era saw the emergence of a right-tending court that poverty lawyers sought to avoid, one that, after Burger retired in 1986, took a definite shift toward favoring corporate interests over individual ones. The inequalities that ensued are of several kinds. Court rulings in the field of education, for example, have validated “the widespread model of overwhelmingly minority urban school districts surrounded by largely white suburban ones,” with the money flowing away from those urban centers and the concomitant “extremely high levels of school segregation.” A different ruling might have created equality of opportunity instead of a clear path to failure, Cohen suggests. Similarly, rulings on political campaign finance have favored corporations, as in the case of Citizens United, and other interventions in politics, as with Bush v. Gore, have worked against the “fundamental principle of American law that court rulings have precedential value.” Throughout, Cohen examines roads not taken, ones that might have “built a different society,” while noting that the court is likely to take an even more rightward tack in coming years.

A provocative and maddening study of judicial activism for the benefit of the haves over the have-nots.

NOTHING TO FEAR
by Adam Cohen
Nonfiction