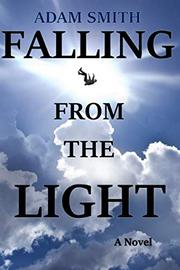 FALLING FROM THE LIGHT

A disgraced insurance salesman becomes the neighborhood spy in this comic novel.

When his 10-year-old nephew, Benny, is struck by a hit-and-run driver, Charlie Doyle immediately jumps into action. Unfortunately, Charlie is drunk and isn’t making the best decisions. When he gets Benny to the hospital, the boy has suffered substantial brain damage. Why didn’t Charlie just call an ambulance and let the professionals handle it? That’s what his neighbors begin to whisper about—and whether it was drunk Charlie who hit Benny in the first place. Following the accident, Charlie’s life begins to spiral out of control. He quits his job at an insurance agency, suspects that his wife may be cheating on him with his brother-in-law, and learns that his 18-year-old daughter, Velijah, was recently arrested for stealing booze from a liquor store. Then a sinkhole opens up and ruins Thanksgiving dinner. Charlie gets a job with a different insurance company—a lot of other sinkholes have opened up in the neighborhood—but his mission is actually to prevent people from collecting on their policies. When Charlie embarks on this unethical scheme with his new neighbor, blackmailer Effie Malfeezian, he also hopes to discover who exactly hit Benny. If he can figure out who did it, he may be able to clear his name and fix his family—and maybe even forgive himself. Smith’s (Scabland, 2017) prose walks the fine line between realism and slight absurdity, fashioning intriguingly odd scenarios. “What I’d like you to do, as a Secret Insurance Agent, is watch people,” explains Tammy Williams, Charlie’s handler. “Gather information. Even on people we’ve already paid out claims to on other matters. I want to know where our money is going. And where it’s not going.” The novel ends up in some unexpected (and slightly unbelievable) places, but the author constructs his world with enough logic and detail that readers will be happy to accompany him into the extraordinary. The result is a dark satire of suburban life reminiscent at times of Tom Perrota and A.M. Holmes.

A humorous and compelling domestic tale about a man pushed to the edge.