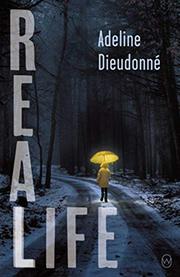 A young girl comes of age in a house of horrors.

In the Demo, a nondescript prefab development, there is a house where a young girl and her dysfunctional family live. Belgian writer Dieudonné’s debut novel, which has already won multiple awards in France, follows an unnamed narrator who fears her father, an abusive big-game hunter; denigrates her mother, a battered wife; and adores Sam, her bright-eyed younger brother. After the two siblings witness a tragedy, their lives are forever changed. Sam retreats from the world and finds comfort in the carcass room where his father’s trophies are mounted. The narrator becomes convinced she’s living in an alternate reality that she can rewrite: “It made everything seem more bearable.” She spends the next few years trying to change the past to save her younger brother—who has stopped smiling, started hurting animals, and become their father's shooting buddy. She studies quantum physics, feels stirrings of forbidden desire, and begins recognizing the dangers of her intelligence and budding body. After a tense moment with her father she has a moment of realization: "I understood that, from now on, just like my mother, I, too, had become a prey.” The novel portrays trauma and abuse with both seriousness and a touch of humor. When talking about the way her mother prepares meals, the narrator says, “She did like an amoeba might, with neither creativity nor taste, but lots of mayonnaise.” Dieudonné’s writing captures momentous and mundane moments with equal insight and beauty: “The houses of the Demo smelled of old damp swimming towels forgotten in a sports bag,” and “[the sounds] escaped from her like jets of steam from a pressure cooker.” Despite a slightly underwhelming ending, Dieudonné’s startling debut tackles dark themes with grace, wit, and sincerity.

THE ISLE OF YOUTH
by Laura van den Berg
Fiction

A GIRL IS A HALF-FORMED THING
by Eimear McBride
Nonfiction