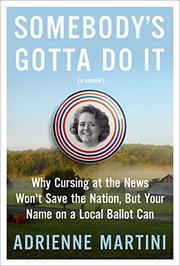 SOMEBODY'S GOTTA DO IT

Why Cursing at the News Won't Save the Nation, but Your Name on a Local Ballot Can
by Adrienne Martini
BUY NOW FROM
AMAZON
BARNES & NOBLE
LOCAL BOOKSELLER
GET WEEKLY BOOK RECOMMENDATIONS:

A fresh and funny memoir by a progressive wife, mother, and writer/editor who ran for local office for the first time in middle age—and won—on a shoestring budget.

After the 2016 presidential election, Martini (Sweater Quest: My Year of Knitting Dangerously, 2010, etc.) channeled her rage into knitting pink pussyhats for the #Resist movement from her home in Oneonta, New York. When that didn’t banish her anger, she asked a locally active Democrat how else she might help, and he urged her to run against the Republican incumbent for the District 12 seat on the Otsego County Board of Representatives. As a political newbie, Martini was skeptical, but she signed on after learning that she could keep out-of-pocket costs low (“in the hundreds, not…thousands” of dollars) and continue to work for the alumni magazine for SUNY Oneonta. Local officials’ decisions, she realized, could affect people’s daily lives more than state or federal politics: “North Korea is important,” but it won’t matter “if everyone in your neighborhood has rabies because the county Board of Health has no money.” In this entertaining memoir, the author describes the highs and lows of her successful campaign and first two years of representing a rural area with about 800 voters in a “deep, deep red” county. She also chronicles her interviews with officials in other states, including Liz Walters, a member of the Summit County (Ohio) Council, who warned the author, “you go in expecting The West Wing. What you really get is a combination of Parks and Recreation and Veep.” With self-deprecating wit, Martini recalls the victories of the Otsego board, such as getting smartphones for social services workers who, until 2017, used “county-issued flip phones,” and problems like the “dark money” that floods even into small-town races. She doesn’t sugarcoat the challenges, from five-hour meetings to family time lost to doorbell-ringing, but she frequently offers strategies for meeting them, and her overall message is hopeful: Democracy works—at least at the local level.

Comic relief—and lots of useful tips—from a journalist with a side hustle as a county official.