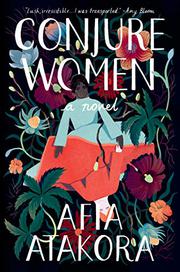 An engrossing debut novel explores the lives of emancipated slaves struggling to survive in the years just after the Civil War.

Atakora’s historical novel is set on a ruined plantation in the rural South so remote that its black inhabitants have rarely seen white people in the years since the war ended. In some ways, freedom hasn’t yet changed their lives; with few resources and little knowledge of the outside world, most of them have remained on the land they used to work for the late Marse Charles. The book’s protagonist is a young woman named Rue. She is the town’s midwife and healer, having learned her skills from her mother, Miss May Belle, who was beloved and trusted by her neighbors (and occasionally called upon to cast curses). After her mother’s death and amid the chaos that follows the war, Rue reluctantly takes May Belle’s place. Although Rue has lived among them all her life, the townspeople begin to turn against her after she delivers a baby for a woman named Sarah. Born with a caul, pale skin, and strange black eyes, the boy, called Bean, unnerves them. Then other children fall ill; despite Rue’s herbs and tinctures, some die, and whispers spread—is she a healer or a witch? The townspeople turn for comfort to a charismatic itinerant preacher called Bruh Abel, and Rue must decide whether he’s an adversary or an ally, all while keeping a dangerous secret. Based in part on narratives of formerly enslaved people gathered by the Works Progress Administration in the 1930s, the novel gives its characters complex lives, rendered in well-crafted prose. Although Atakora writes of such horrors as lynchings, beatings, and rapes, most of her story focuses on the intense relationships among people trying to make sense of a world turned upside down. Mother-child relationships, especially, are at the center of the book. Using frequent flashbacks to “slaverytime” and “wartime” and occasional jumps to the future, Atakora structures a plot with plenty of satisfying twists.

Life in the immediate aftermath of slavery is powerfully rendered in this impressive first novel.