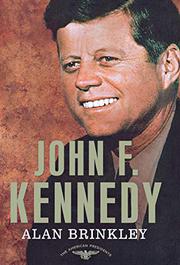 The admirable American Presidents series nears its end with another slim but astute biography by another big-league historian, this time Brinkley (The Publisher: Henry Luce and His American Century, 2010, etc.).

The reputations of his predecessor (Eisenhower) and successor (Lyndon Johnson) are rising steadily; not so with John F. Kennedy (1917-1963), whose middle-of-the-pack rating has changed little. This seems a fair evaluation of his actual accomplishments, admits Brinkley, who adds that he left an enormous legacy as a charismatic leader and a glamorous symbol of hope and purpose long after his death. He was the handsome, unscholarly, self-indulgent son of Joseph Kennedy, whose enormous wealth and ambition cleared his path through Massachusetts and then national politics. As a congressman and senator, Kennedy may have been more conservative than Eisenhower—more fiercely anti-Soviet, in favor of military spending, uninterested in domestic reform and civil rights and an admirer of Joseph McCarthy. Elected our youngest president in 1960 by a tiny margin, his charm enchanted the nation despite a first year that included the disastrous Bay of Pigs invasion and bungled Vienna summit. Experience and input from advisors, including his brother, Robert Kennedy, improved his performance and social conscience, but Congress rejected his bills advancing civil rights, tax reform, aid to education, medical care for the elderly and antipoverty efforts. All passed under Lyndon Johnson, who possessed political skills that Kennedy lacked.

THE PUBLISHER
by Alan Brinkley
Nonfiction

LIBERALISM AND ITS DISCONTENTS
by Alan Brinkley
Nonfiction

THE END OF REFORM
by Alan Brinkley

THE PATRIARCH
by David Nasaw
Nonfiction

1960: LBJ VS. JFK VS. NIXON
by David Pietrusza
Nonfiction