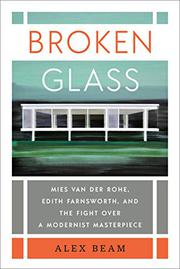 The tale of a relationship and the “architectural treasure” it created.

As Boston Globe columnist Beam (The Feud: Vladimir Nabokov, Edmund Wilson and the End of a Beautiful Friendship, 2016, etc.) stylishly lays it out, this is the story of two very smart and strong-willed people and the unique house that came between them. The author begins in 1945 with a dinner party in an elegant Chicago apartment. Edith Farnsworth (1903-1977), an accomplished doctor and researcher, had recently purchased land near the Fox River, an hour southwest of Chicago, where she hoped to build a getaway home. Also at the party was the noted architect Mies van der Rohe (1886-1969), who had recently moved from Europe to America. When they met, van der Rohe said, “I would love to build any kind of house for you.” Farnsworth was prosperous, and the architect was ambitious. He had the innovative idea to “build the house of steel and glass; in that way, we’ll let the outside in.” From 1946 to 1947, the two made enjoyable visits to the site, and a close relationship developed. They agreed on a house with floor-to-ceiling glass at an estimated cost of $40,000. However, as Beam writes, a “funny thing happened on the way to building Mies’s glass house. [Architect] Philip Johnson built it first”—but he graciously acknowledged van der Rohe’s influence. By 1949, Farnsworth and van der Rohe “were no longer intimate friends.” Beam diligently chronicles the back-and-forth squabbles over skyrocketing costs that eventually brought the price to $70,000. The architect demanded more money, but Farnsworth had had enough, so she sued him. “Some of the great moments in the history of twentieth-century architecture flew by in the sleepy Yorkville courtroom,” writes the author, whose detailed recounting of the trial may be too much for some readers, but most will enjoy the cultural history aspect of the narrative. They settled out of court. Farnsworth rarely lived in her glass house (though it is now iconic), and van der Rohe became famous.

An engrossing foray into architectural history.

THE FEUD
by Alex Beam
Nonfiction

A GREAT IDEA AT THE TIME
by Alex Beam
Nonfiction

THE AMERICANS ARE COMING!
by Alex Beam
Newsletter sign-up