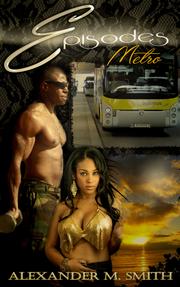 This tale of urban erotica goes from zero to 60 in no time flat when a man sets his sights on a neighborhood bus driver.

Ladies love a man in uniform—but this steamy novella flips that convention on its head. Chance Alexander is a regular on Tameka LeBlanc’s bus route, and today’s the day he makes his move, wowing her (and his fellow commuters) with a sexy poem he’s written for her. But make no mistake, this sensitive man is domineering in bed—and unwilling to compromise on what he wants. In this case, he wants the Princeton University-educated Tameka, who’s working for the Metro Transit department until she figures out her next move; little does she know that her life is about to change for the better. After a steamy first date rocks both of their worlds—and the bus where it takes place—the two quickly slip into coupledom. Tameka even accompanies Chance to a showing of the condominium that he plans to buy, which leads to a bit more naughty business. But it soon turns out that there could be trouble in paradise. Kudos to Smith (In Love’s Time, 2014), who manages to cram the plot of an entire romance novel into 30-something pages. The seduction is fast-paced and fun, with a natural progression of raunchy scenes that even include a few handy tips from the male perspective. Unfortunately, the couple’s falling out is a weak plot point and, frankly, so cursory that it’s easy to miss. Although there’s some flirtatious, spunky banter, the dialogue is mostly perfunctory, and character development takes a back seat. Indeed, Tameka’s subservience to Chance overshadows her other personality traits, and even her dirty talk gets repetitive. Still, its action-packed final few pages and sweet ending are rewarding, and the novella would work well as part of a larger collection.

Somewhat underdeveloped, but a nice break from reality for readers who want sexy, easy-to-digest fare.