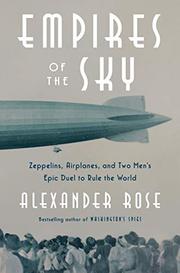 EMPIRES OF THE SKY

A history of the obsessive pioneers of flight.

Bestselling historian Rose (Men of War: The American Soldier in Combat at Bunker Hill, Gettysburg, and Iwo Jima, 2015) emphasizes that when the Wright brothers made the first heavier-than-air flight in 1903, airships had been carrying passengers since the Montgolfier brothers first launched their balloon in 1783. Until well into the 1930s, many entrepreneurs believed that dirigibles—spacious, quiet, capable of flying long distances—were the wave of the future compared with cramped, noisy, accident-prone propeller-driven craft. After a brief account of a successful 1936 flight of the Hindenburg, “the ultimate transoceanic cruiser” that would be destroyed in a spectacular crash just a year later, Rose rewinds the clock to 1863, when German Count Ferdinand von Zeppelin (1838-1917) first flew in a balloon and was inspired. After retirement, he devoted himself to building powered airships, immense craft lifted by flammable hydrogen (helium, much safer, was wildly expensive). He created the world’s first commercial airline in 1909. The difficulty of control in bad weather and the danger of hydrogen proved to be insoluble problems. Airships suffered a dismal safety record, although Zeppelin’s passenger airline, under his successor, led a charmed life until the Hindenburg disaster. Rose’s intriguing second subject does not appear until the author reaches the 1920s, when Juan Trippe (1889-1981) joined other businessmen investing in the first airlines. As the author shows, the competition in the U.S. was already cutthroat, but few airlines existed south of the border, and he began acquiring exclusive rights to fly to the Caribbean and later South America. Flush with profits—from airmail contracts; passengers came later—he persuaded Boeing to develop a flying boat capable of crossing the ocean. The resulting “clippers” became the epitome of glamorous air travel during the 1930s. By 1940, when the book ends, Trippe’s Pan American World Airways was the world’s largest international carrier, and the Zeppelin was history. Technical and business details dominate the narrative, but the primary story is often riveting.