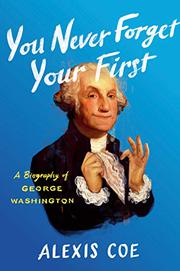 YOU NEVER FORGET YOUR FIRST

A biography of George Washington that debunks many of the tall tales surrounding his legacy.

When Coe (Alice + Freda Forever: A Murder in Memphis, 2014), a former research curator at the New York Public Library, began gathering information for her latest book, she realized that most of the major Washington biographies had been written by men and were often biased toward a male perspective. Because this book avoids the male-centric viewpoint, it should make for interesting reading even for those who think they know Washington’s story. Coe shares the unvarnished truth about the man, exposing many of the myths about him. In one section, the author examines the “Lies We Believe About the Man Who Could Not Tell Them,” which include the “fact” that “He was the first president to live in the White House.” As Coe notes, “Washington helped choose the site of the White House, but John Adams was the first president to live there.” The author chronicles Washington’s battles in the French and Indian War and his flirtations with women prior to meeting Martha Custis, who, within a year, became his wife. Coe writes extensively about the slaves and indentured servants who called Mount Vernon home and the man who served as Washington’s personal aide throughout his life, including on the battlefield. The author has clearly done her homework, evident throughout the text in the letters and documents she quotes and the numerous sidebars and charts she incorporates, including a listing of the numerous animals housed at Mount Vernon. Coe juxtaposes her portrait of Washington’s political and leadership traits with a softer side of him as stepfather to Martha’s children, but she also shows his negligence toward his own mother. There is also a timeline, a list of “diseases survived,” and a handy bulleted section called “George Washington at a Glance” (his “dislikes” included “idle chatter,” “sitting for portraits,” and “slapstick humor”).

Evenhanded and engaging, this biography brings fresh insight to one of America’s most written-about leaders.