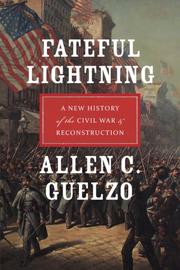 As late as the 1830s, writes the author, the United States behaved more like a compact of states than a single country. Strong communal bonds kept North and South united. But economic issues divided the sections, and slavery would become the catalyst for disunion. Despite efforts to find workable compromises in the decade before the conflict, there ensued four years of “dislocation, shock, and carnage.” Based on recent historical research, Guelzo’s account goes beyond the details of generals and battles to explore the war’s ramifications on wide-ranging aspects of American society, including religion, gender and technology. While analyzing agendas and strategies and deciphering Lincoln’s thinking regarding the Emancipation Proclamation and Reconstruction, the author re-creates dramatic moments on and off the battlefields, from the looting of goods during the Richmond bread riot to a mob’s angry assault on a Union arsenal in the Boston draft riot. Guelzo discusses the important role of railroads, the telegraph and other new technologies; the lives of ordinary volunteer soldiers, who often drank to near insensibility before charges; the war’s “real killer,” disease, caused by poor hygiene and food and ignorance of bacteriology; the reasons for the war offered by intellectuals (“blatherers,” Walt Whitman called them) on both sides; and why American religion became one of the conflict’s major cultural casualties. The author also considers the war from the vantage of African Americans as well as Native Americans and other minorities, and he concludes with an astute assessment of the confusion and dislocation of the postwar years and the coming of the Gilded Age.

An authoritative view of the great American trauma.

THE WARS OF RECONSTRUCTION
by Douglas R. Egerton
Nonfiction

A SHORT HISTORY OF THE CIVIL WAR
by James L. Stokesbury
Nonfiction

A MASSACRE IN MEMPHIS
by Stephen V. Ash
Newsletter sign-up